Toronto's housing market has become notoriously ridiculous in recent years when it comes to fast-rising prices and a complete dearth of affordable options, to the point where most millennials would now just laugh if you told them to "invest in real estate."

In a city where the average cost of a detached home is now $1,598,735, most of us can't even afford to buy a place we could live inside, let alone an investment property (that stuff is for the lucky olds who bought 30, 20 or even 10 years ago.)

Condos remain an option for some, but young Torontonians dreaming of their own little house to raise a family can forget it... nearly every habitable house in this city sells for exponentially more than what it cost at the time of construction.

Maybe, instead of renting for life or leaving the GTA entirely, we can build start building our own homes?

A new report from The U.K.'s capital on tap suggests that, despite the relatively cheap cost of building materials in Canada's largest city, Toronto remains one of the most expensive places in the world to buy a home. 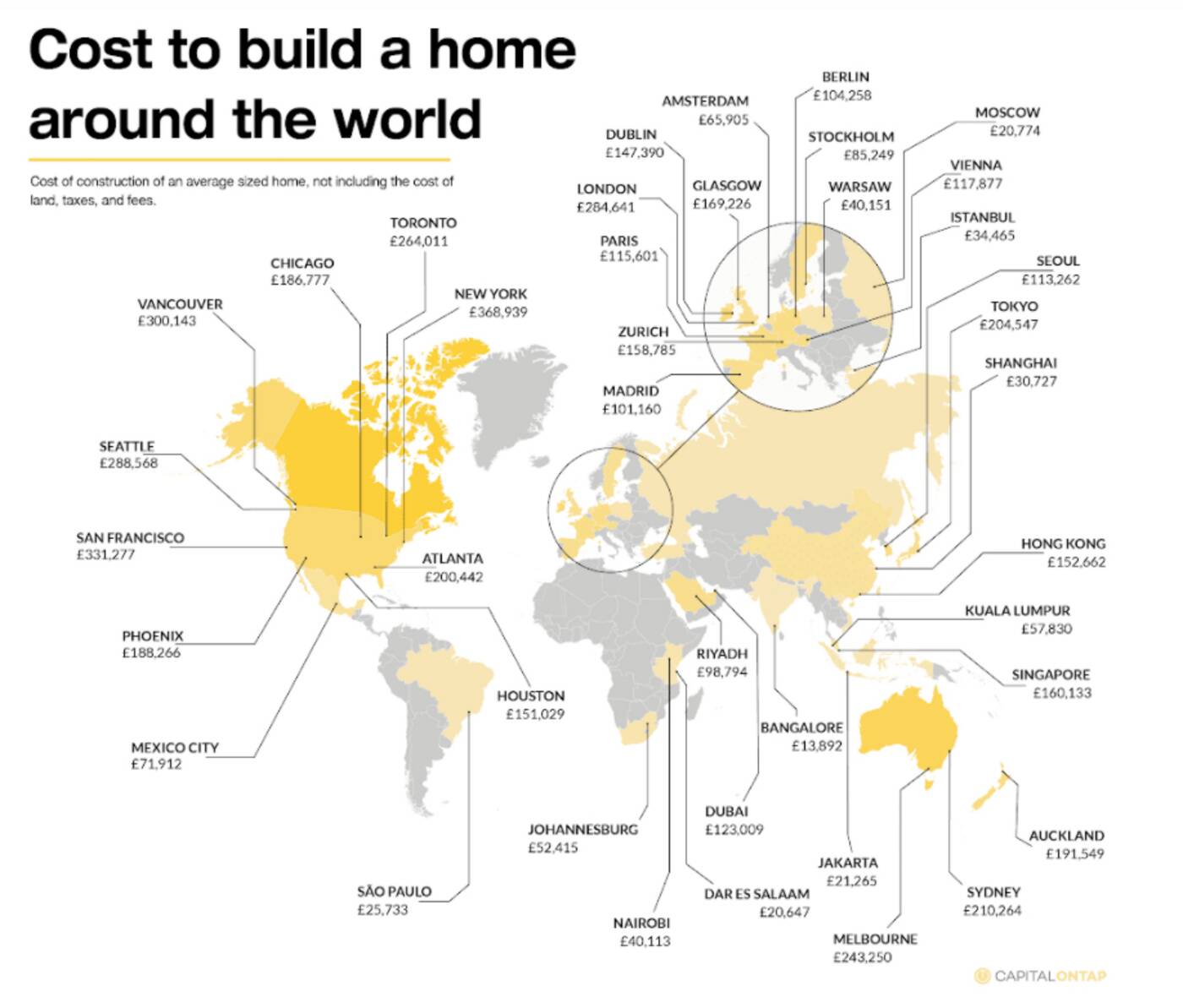 This is how much it costs per square metre, in British pounds, to build a home in different major cities around the world. Toronto's up there, but Vancouver is worse. Image via Capital on Tap.

"The demand for housing in recent years has pushed house prices to dizzying heights, and whether you're looking for your first home, something with a bit more room, or a place to retire, the cost of moving has many people wondering whether it might be easier to build their own home rather than competing with other prospective buyers for that perfect property," writes Capital on Tap in its report on the most-expensive global cities in which to build.

"It's worth noting that the construction cost of a typical home can vary considerably by location - as well as other costs such as land, fees, and taxes. But which cities have the highest construction costs and how much would it cost to build an average-sized home?"

The firm looked at 50 different cities around the world and collected data based on how much an average-sized home would cost to build per square metre in British pounds.

Toronto came in as the seventh-most expensive city on the list, with an average price per square metre of £1,879 (roughly $3,197 Canadian.)

Hong Kong, London and Tokyo rounded out the top three, and Toronto wasn't even the only Canadian city on the list: Vancouver is also one of the world's most-expensive building markets for homes. Who'd have thought? (narrator: "everyone.")

Without further ado, here's the top ten list via Capital on Tap:

Most expensive cities to build a home per m2