The only thing more frustrating than buying a home for $300,000 over what it cost two years ago is knowing that you'll need to tack another $200,000 on top of the asking price just to be considered for the privilege.

Such is the nature of stupid hot housing markets, as anyone in Toronto — and increasingly elsewhere in Ontario — can tell you.

Detached homes in covetable locations have been known to prompt intense bidding wars in Canada's largest city for at least a decade, forcing would-be buyers to try and one-up each other with piles of pure cash, turning $995,000 houses into $1,650,000 houses within a matter of days.

It's a whole thing, and it's frustrating as heck for buyers with budgets, even when their budgets are huge: This stately four-bedroom in Rosedale, for instance, recently hit the market for $4.5 million but actually sold for $6.6 million. And the phenomenon is spreading.

"Markets big and small across Ontario have experienced unprecedented price growth over the course of the pandemic, with the benchmark home price for the province up 19.7 per cent from September 2020, according to the Canadian Real Estate Association," reads a new report from the brokerage and analysis firm Zoocasa

"This means today's buyers can expect to encounter a bidding war – perhaps several – before they successfully purchase a property."

Nearly 80% of houses selling for more than the asking price is not normal and not just a marketing gimmick.

It's a sign of a housing market that is significantly overheated - policy makers need to wake up about this. https://t.co/j7HfoLHKbR

While far from the only factor behind Toronto's recent urban exodus, bidding wars have certainly played a role in driving prospective homebuyers out of town and into smaller markets where listing prices are not only far more affordable, but often more accurate.

Influxes of city folk have in turn driven up home prices in smaller Ontario cities, where, like Toronto, home supply can't keep up with home demand.

Zoocasa's latest report looks at where, specifically, homes are "routinely selling for above their list price" across the province, highlighting conditions for brutal bidding wars in mid-sized cities such as Ottawa, Whitby and Windsor.

Despite the relative affordability of homes in these markets, Zoocasa says buyers may face "greater sticker shock" in cities where there is a large discrepancy between the average listing price and the average final sold price — a factor that itself is influenced by how competitive any given market is.

For the purpose of real estate, competitiveness can be quantifiably measured by looking at supply vs. demand — or, as experts call it, the "sales-to-new-listings ratio" (SNLR).

Zoocasa crunched the numbers to compare both the SNLR and average listing vs. sold prices for September of 2021 in 29 different cities across Ontario and found that — surprise surprise — "the number of available homes for sale has plunged progressively deeper each month in nearly every major market, constraining sales and creating tight sellers' market conditions across the province." 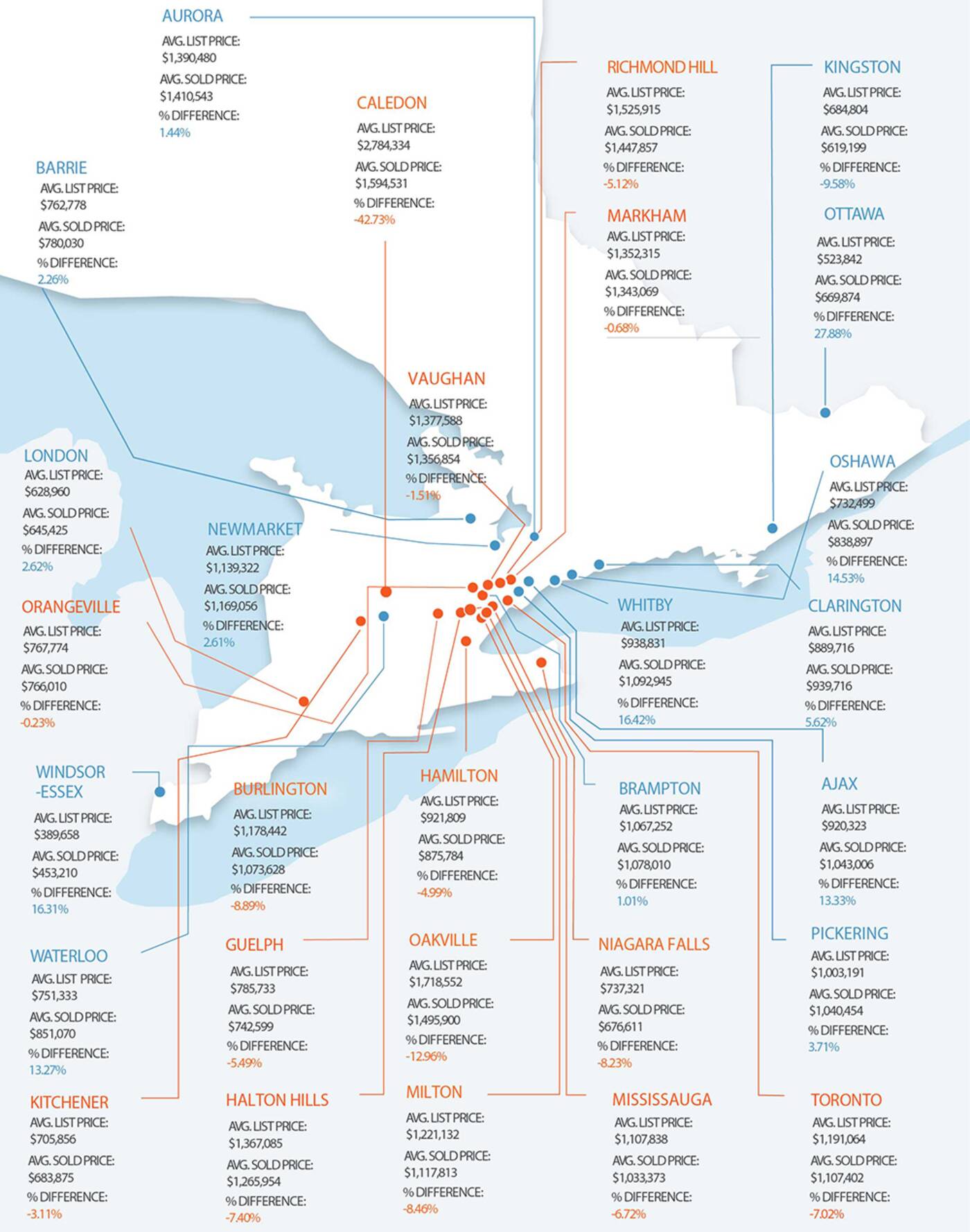 Zoocasa's managing editor, Penelope Graham, explains that homes are selling for more than their listing price by the greatest percentage in small- to mid-sized cities, where prices come in below the the $1-million mark on Average.

"Notably, three of the top-five markets are located in the Durham Region, long considered a hot alternative to the City of Toronto, at a commutable distance," writes Graham.

"In contrast, the markets where homes sold below list price by the greatest percentage are generally known for their higher price points. In the municipality of Caledon — a largely rural market with a reputation for big lots and luxurious custom builds — the average sold price of $1,594,531 falls -42.7 per cent below the average list price of $2,784,334."

Toronto fit squarely into the latter category last month, with an average selling price 7.02 per cent below the average list price and an SNLR rate of 56.06 per cent, indicating a "balanced" market.

You can see the full breakdown of how much houses are going above or below asking, ranked by city, on Zoocasa's website, but here are the ten hottest cities in Ontario for bidding wars as of late 2021: