The median rent price for a one-bedroom condo or apartment in Toronto is modestly climbing, no doubt, as the city starts to recover from the impacts of a global pandemic — but the rate of increase is a low lower than most people seem to realize.

New figures from Zumper (previously Padmapper) show that one-bedroom units in Toronto were renting for a median price of $1,770 in August of 2021.

Last August, we were reporting that year-over-year rent prices had fallen in Toronto by roughly ten per cent, down from $2,300 in August of 2019.

Little did we know that prices would sink even further throughout the fall and early winter, down by more than 20 per cent on an annual basis by the end of 2020.

Local real estate markets are still recovering from the unprecedented impacts of COVID, which not only saw people leave their small downtown condos for larger, cheaper places elsewhere, but resulted in a flood of short-term rental units being converted into regular apartments.

Things were great for prospective renters at the time, but relatively speaking, they still kind of are.

According to Zumper's latest National Rent Report, median prices are rising more slowly on a year-over-year basis in Toronto than any other major Canadian city.

On a monthly basis, Zumper found that prices were actually down between July and August of this year by 1.1 per cent, though two-bedrooms rose by a modest 0.40 per cent.

Vancouver — our biggest competitor for the unwanted title of most-expensive housing in Canada — meanwhile saw median one-bedroom rents shoot up by 5 per cent month-over-month and year-over-year.

Toronto was, in fact, one of the only major Canadian cities surveyed that still showed depreciating rent prices on a monthly or yearly level. One-bedrooms in Halifax, for instance, rose a staggering 20.50 per cent between August of 2020 and August of 2021.

But take that with a grain of salt, as Halifax was much cheaper to begin with: At only $1,410 per month for a one-bedroom unit, Canada's fastest-rising rent prices are still much cheaper than the slowest-rising (hi, Toronto.)

Here's the full breakdown of all major Canadian metropolitan areas surveyed each month by Zumper, courtesy of the firm: 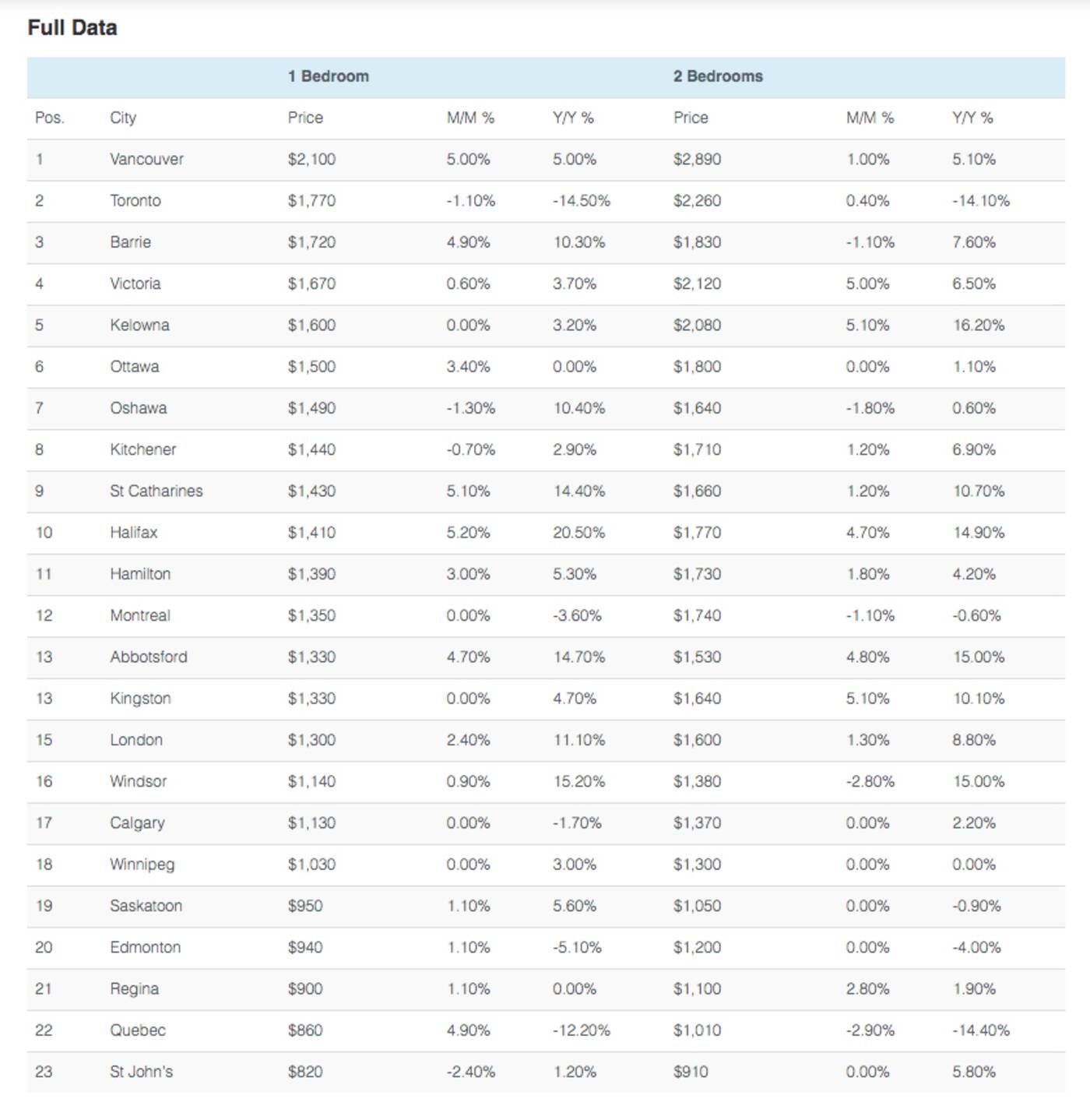 Zumper analyzes rental data from hundreds of thousands of active listings across the country and then aggregates them to calculate median asking rents each month. Image via Zumper.