Here are the most and least expensive neighbourhoods in Toronto

One need only to drive about three minutes down any major street in Toronto to realize that some parts of this city are wealthier than others.

That's how cities tend to work, but the spectrum of house prices across Toronto's 144 neighbourhoods is pretty extreme, ranging from an average of roughly $780,000 to more than $5.1 million.

Toronto realtor and chartered accountant Scott Ingram breaks down just how wide the gap is between least and most expensive in a new piece on his website featuring interactive maps that let you see how much an average house costs where you live, and how that stacks up against other hoods. 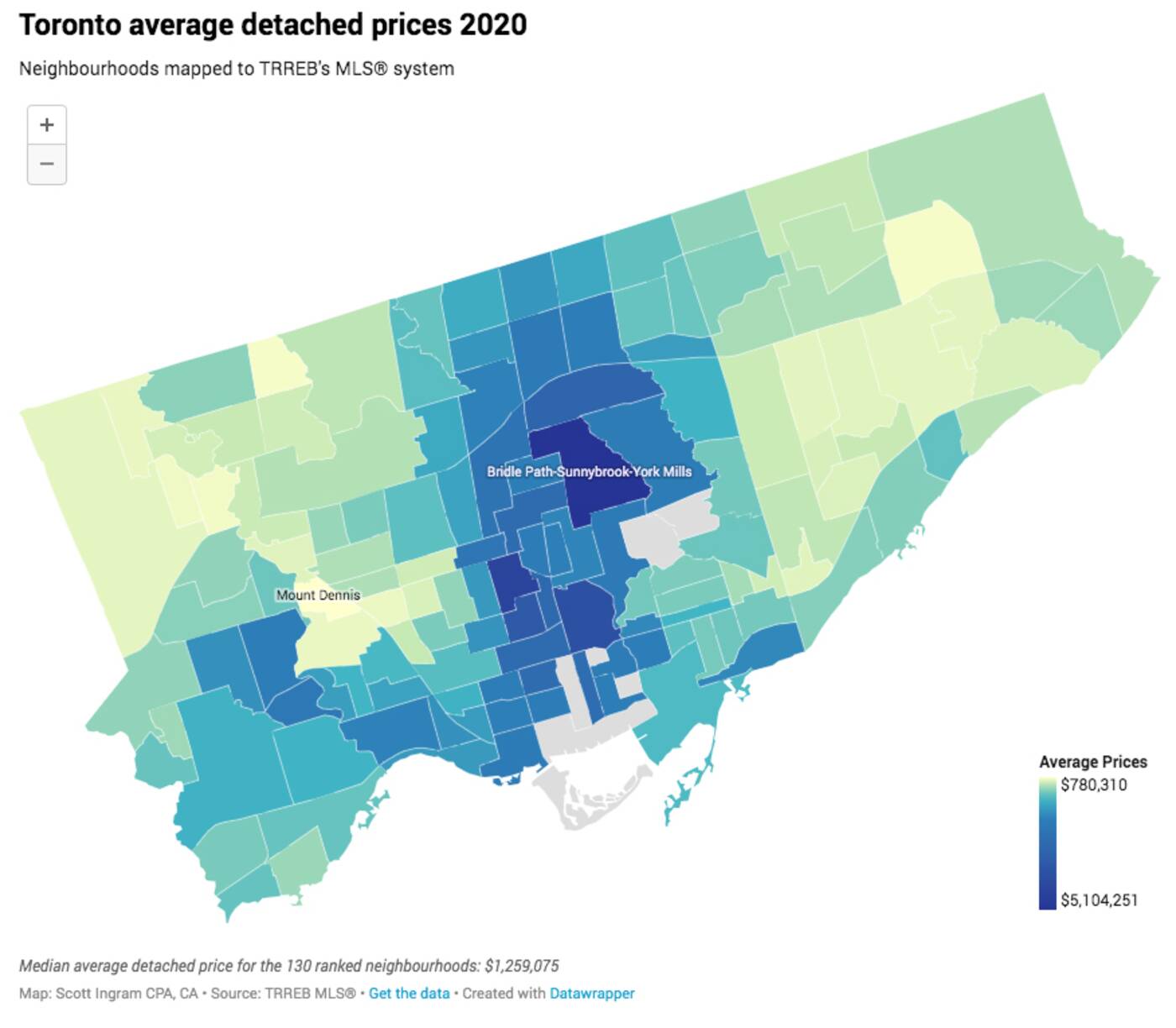 You can play with an interactive version of this Toronto median average detached house price map on Ingram's website.

"Detached is far and away from the most prominent housing type in the city (it's been between 70 per cent to 72 per cent of freehold transactions in each of the last four years) so it seems the most appropriate."

Ingram also clarifies that by "city" he means the City of Toronto proper — places with a 416 area code.

After crunching data from the Toronto Regional Real Estate Board for 2020, the realtor and accountant found that — surprise, surprise — the most expensive houses in Toronto can be found in the Bridle Path area. 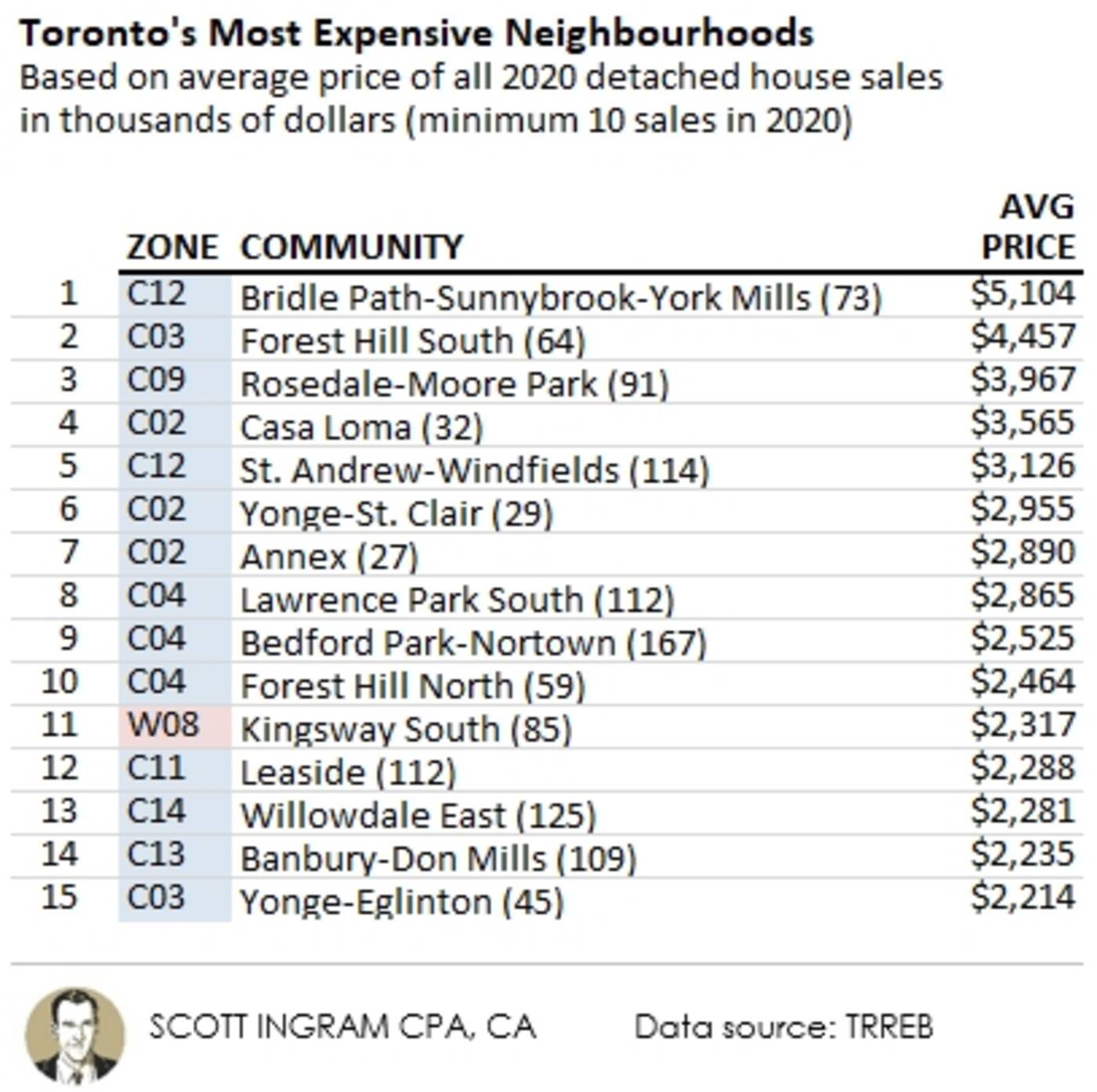 In terms of the least expensive neighbourhoods, Mount Dennis retains its title from 2019 — though with a much higher average home price.

Another interesting tidbit: There are now more neighbourhoods with average detached house prices above $2 million (32) than there are left under $1 million (29).

Toronto house prices that were already careening upward before the pandemic have been rising even faster over the past year due to a surge in demand and a lack of supply amid the COVID-19 pandemic, among other factors.

While detached homes remain unaffordable anywhere in the city for many, here are the neighbourhoods where buyers are most likely to find less-expensive properties: 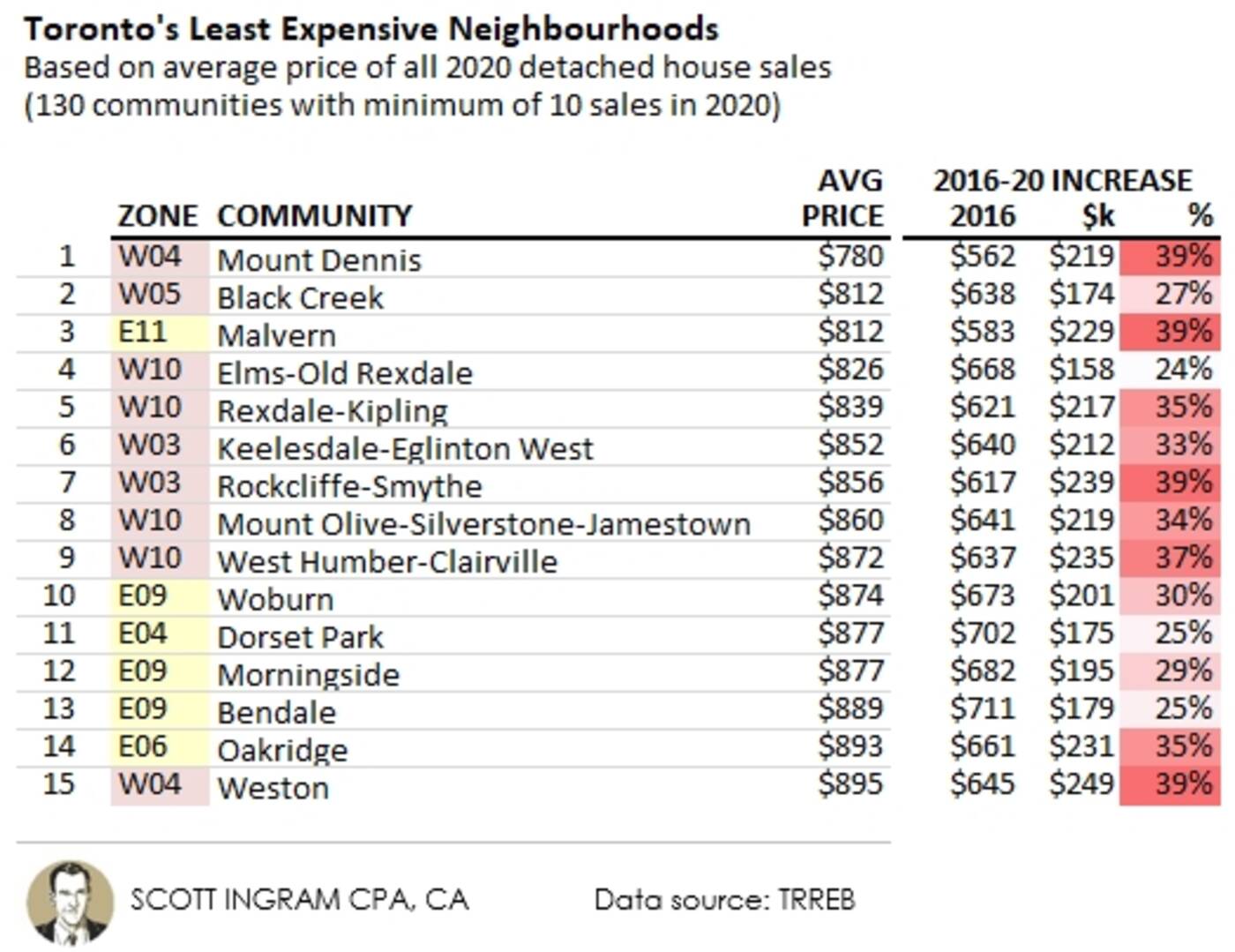 Ingram also charted out how much house prices had risen between 2016 and the end of 202 in each of Toronto's 15 lowest-priced neighbourhoods.

On average, he says, prices for detached homes went up 18.7 per cent across the city, though some areas boasted far higher rates, particularly in areas on the low end of the price scale.

House prices in Mount Dennis and Malvern both shot up by 39 per cent over the time period surveyed by Ingram, rising by $219,000 and $229,000 respectively.

The neighbourhoods where prices rose the most in overall dollar amounts last year are quite obviously areas where houses cost a lot of money to begin with.

You can see another interactive map illustrating losers and gainers here. Spoiler: Houses in Casa Loma saw the highest price increases between 2019 and 2020, appreciating in value at an average of $550,000 (18.2 per cent.)