This super austere new landmark building is coming to Toronto

If you're a regular traveler of Lake Shore Blvd. in Toronto, you'll want to keep an eye out for a special new project that's currently under construction — though it's not one you'd be able to ignore if you tried.

A peculiar new building will be gracing the corner of Lake Shore and Cherry Street later this year, and its design has already won awards and been recognized by experts as innovative, ambitious and attention-grabbing. 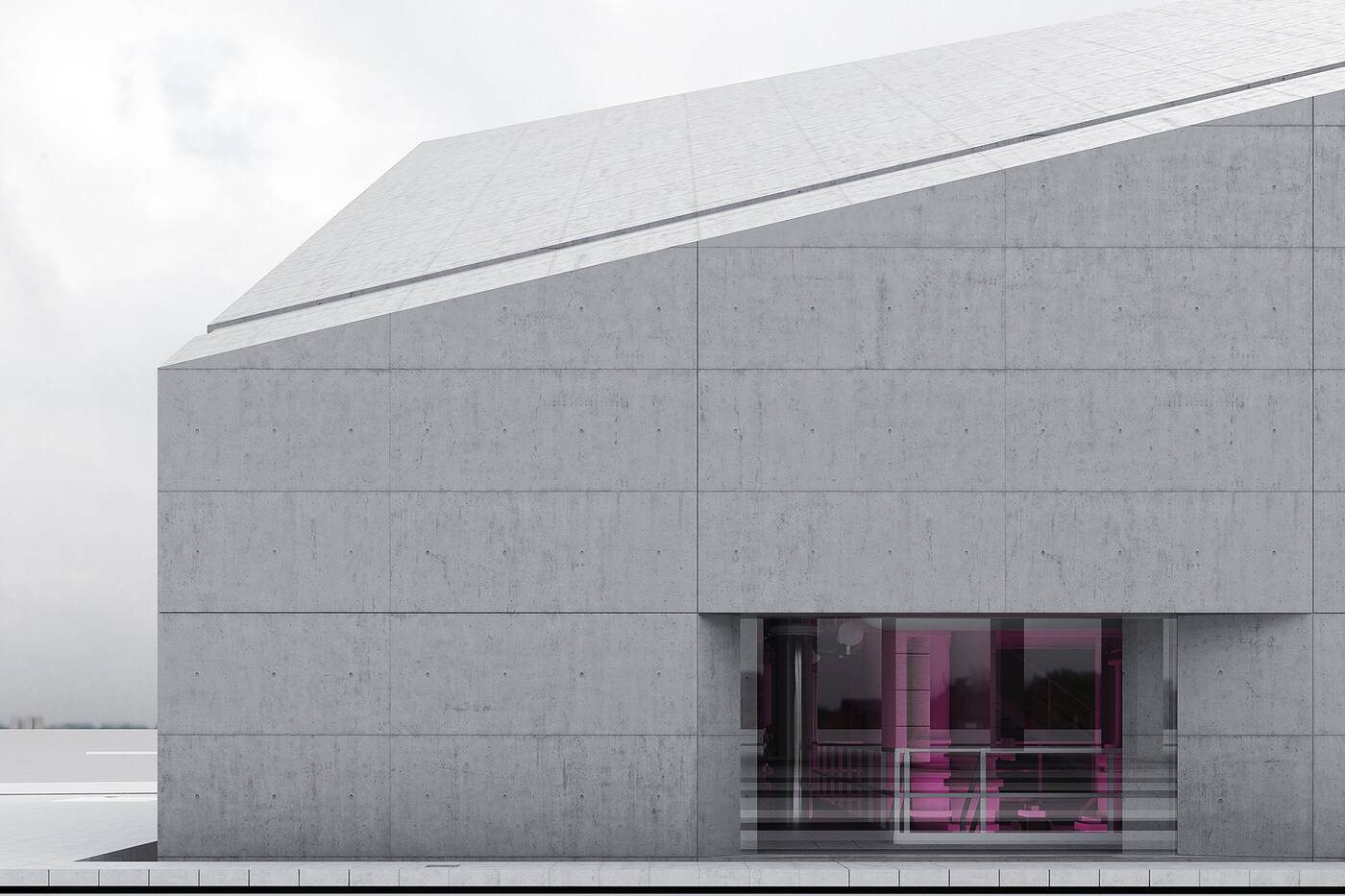 The sleek exterior design somehow evokes the past and the future simultaneously. Rendering from gh3*.

It's hard to tell whether the building that will house a new Storm Water Quality Facility (SWQF) looks hyper-futuristic or something out of a '70s brutalist past, but it's undeniably pretty cool, and definitely stands out from other structures in the city.

It's simple and severe, inspired by other historic and defining infrastructure in the city, like the Bloor Street Viaduct and the R.C. Harris Treatment Plant, the latter of which looks more like a military school or prison than what it actually is. 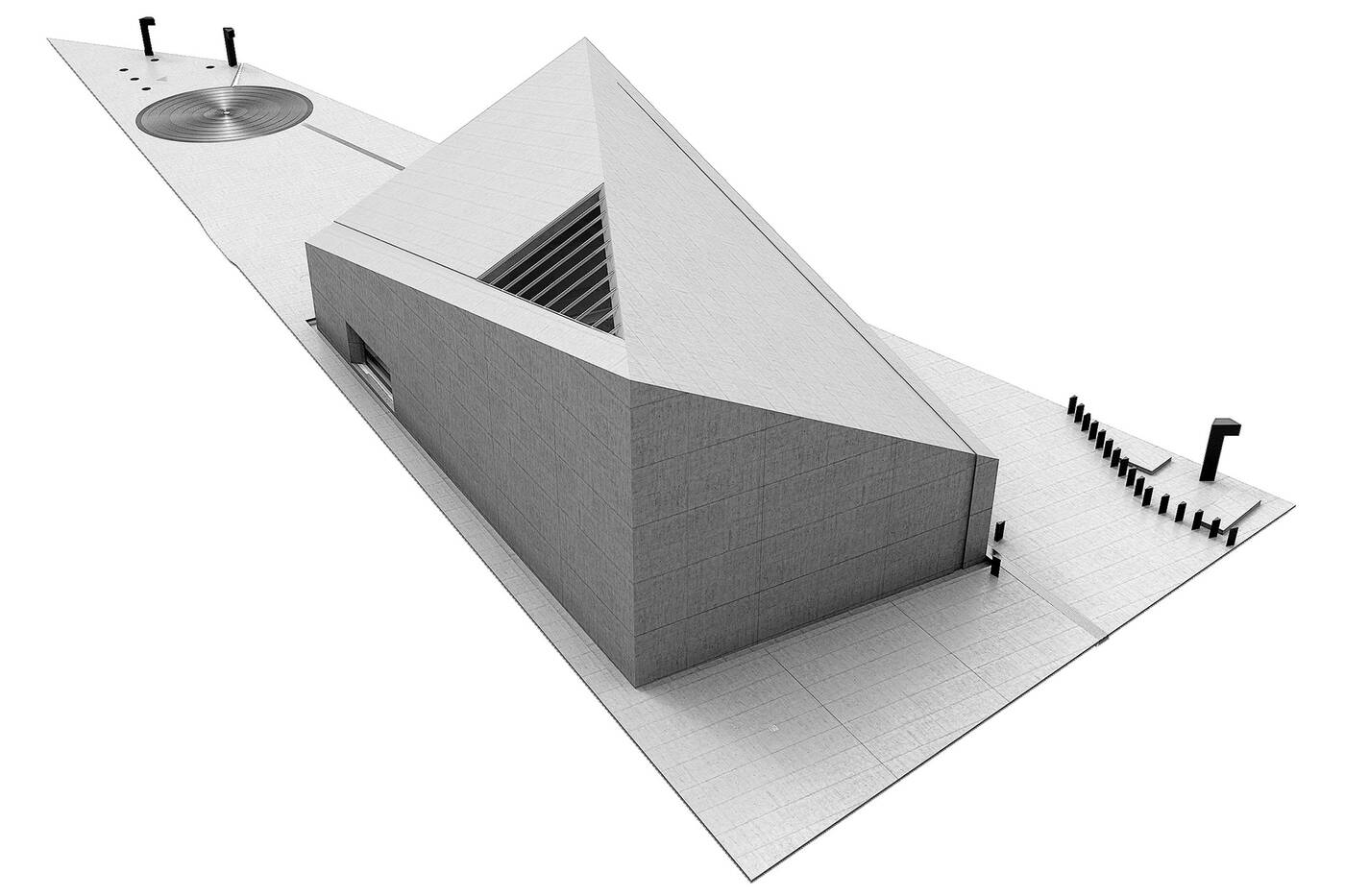 A concrete pad serves as part of the design while also providing parking around the building. Rendering from gh3*.

Though the new facility is much smaller at 279 square metres, it still asserts itself with hard angles, sturdy concrete and clean lines designed by architects at gh3*.

As the firm states, the SWQF "represents state–of–the–art handling and treatment of stormwater [while] the design for the facility enclosure and site also elevates the spatial role of the infrastructure." 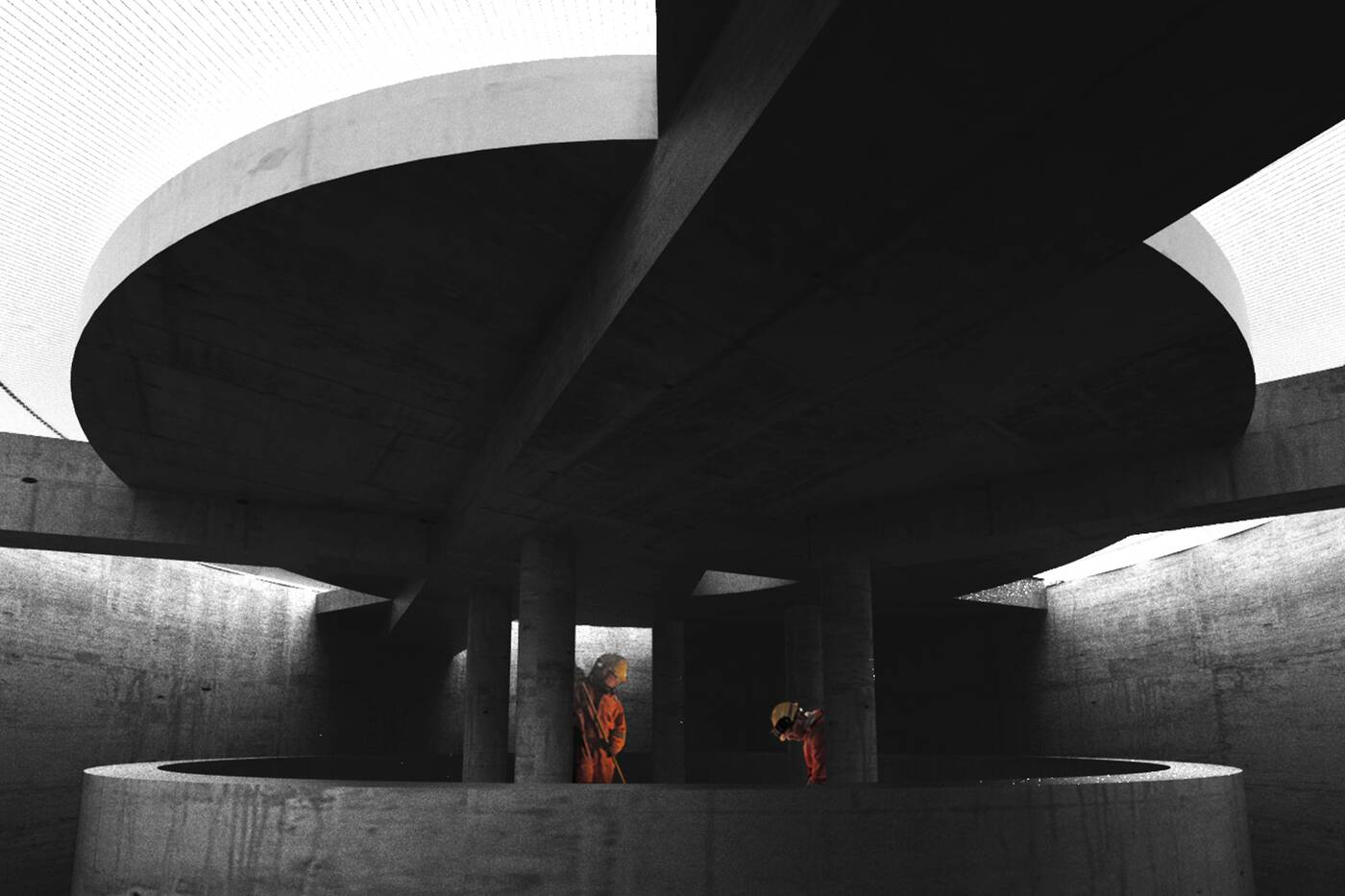 State of the art processes will be used to treat water from rain and snow. Rendering from gh3*.

The goal of the aesthetic is to "render the infrastructural function legible, didactic and aesthetically compelling," and to be a part of "a new face of Toronto, in which leading environmental performance, award-winning urban development, and world-class design operate together."

Inside its doors, there will be a four-part state-of-the-art plant for runoff that includes a 20-metre wide shaft to take in water, treat it by oil grit separation and UV light, and send it out into Lake Ontario. 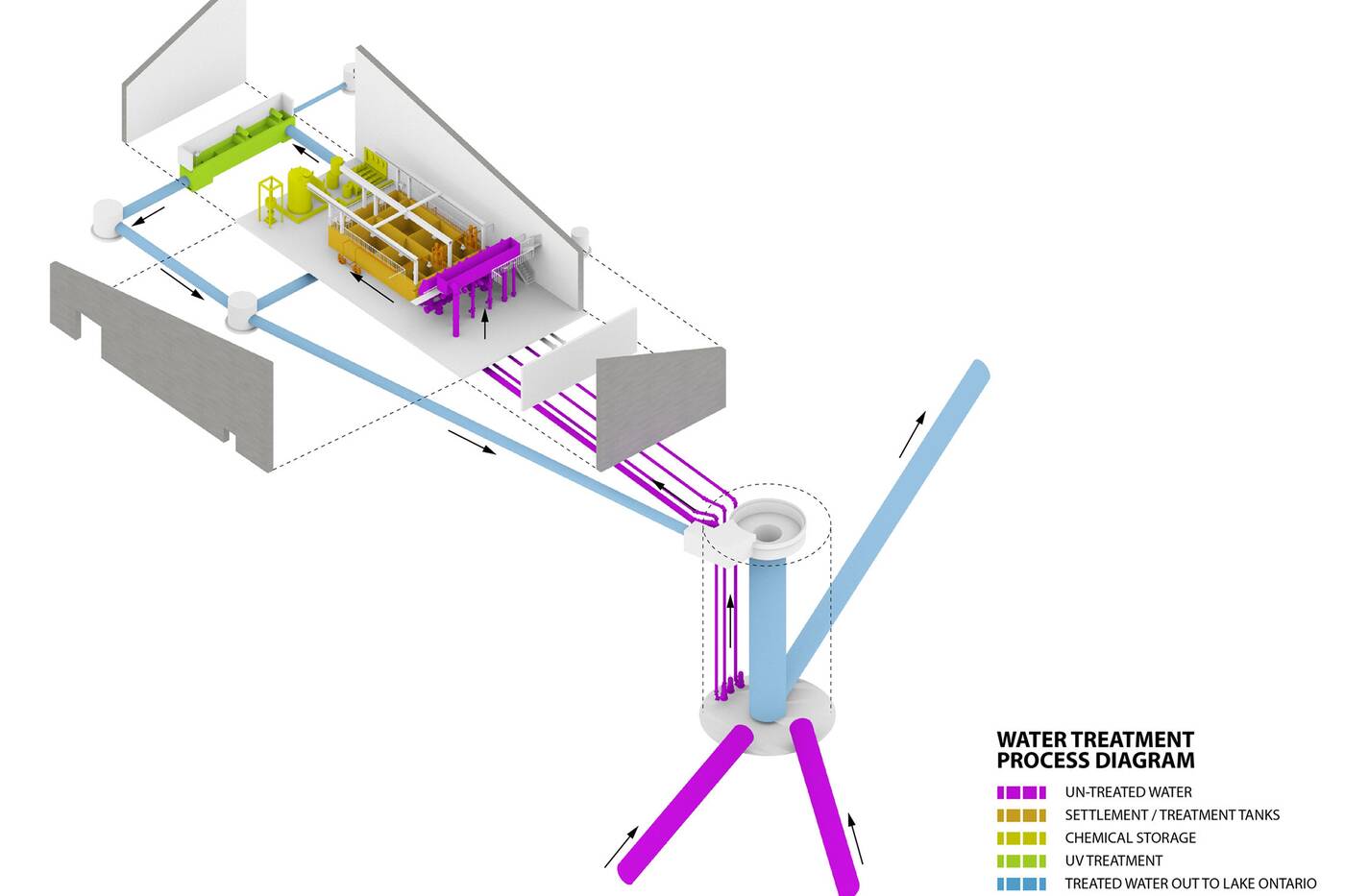 Water will go through a four-part treatment before being released into the lake. Rendering from gh3*.

Water will be sucked in from the growing community of West Don Lands via a 20m wide shaft that is covered with a metal grate that is reminiscent of a grounded UFO. Then, all of the magic will happen behind closed doors — er, concrete walls — and underground.

It's not easy to intigrate aesthetics into a functional building like this on a budget, but it seems that the firm has done so in a way that still somehow communicates that the building serves some sort of integral utilitarian fuction. 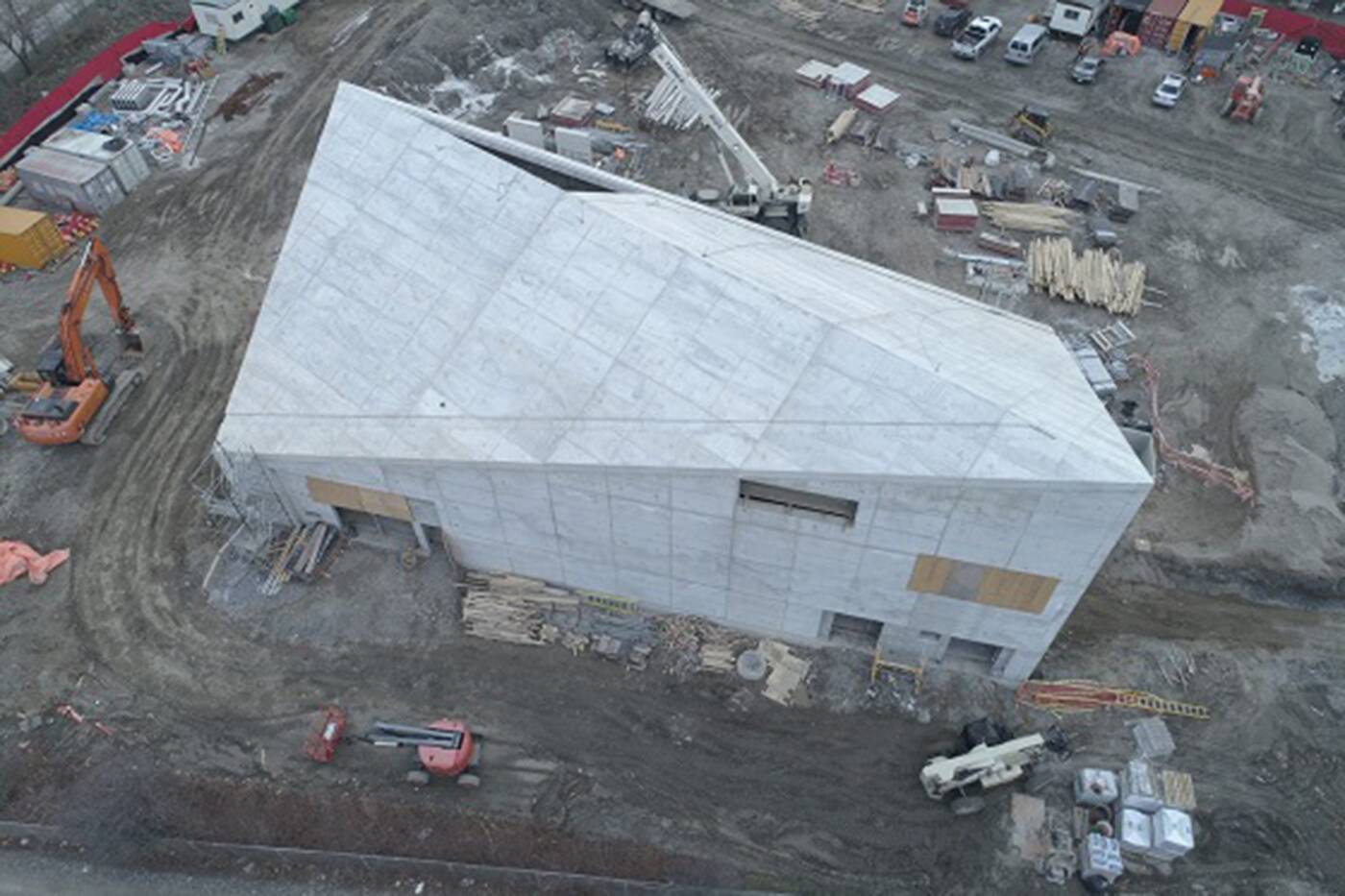 Construction on the structure has already begun. Photo from Waterfront Toronto.

For those who aren't in the know, they will likely be left wondering what the heck the distinctive, mysterious and alien-looking building is for.