Sneaky Dee's may not be closing in the immediate future, but the iconic Toronto punk bar will eventually either have to move locations or transform into a different, less-grungy version of its current self.

Earlier this month, longtime Toronto residents were dismayed to learn that a development application had been filed for a "13-storey mixed-use building" at 431 College Street — the site that's been occupied by Sneak's since the early 1990s.

Declarations of rage and sadness ripped through the social mediasphere, rife with the kind of anti-gentrification sentiment we've come to expect. It seemed as though Sneaky Dee's was next on the long, ever-growing list of beloved local haunts that Toronto would lose to condo developers.

Fortunately, the venue's owners were quick to correct the narrative: Sneaky Dee's won't be closing — ever, if they have anything to do with it.

"There will be two Sneaky Dee's before there are none," the team behind the family-run business told blogTO earlier this month, clarifying that even if they do get booted from their current location, it won't happen for years.

They're right. It can and usually does take developers years to secure all of the approvals they need to proceed with demolishment and construction, even for minor projects.

In the end, though, they always do... and that's not necessarily a bad thing. 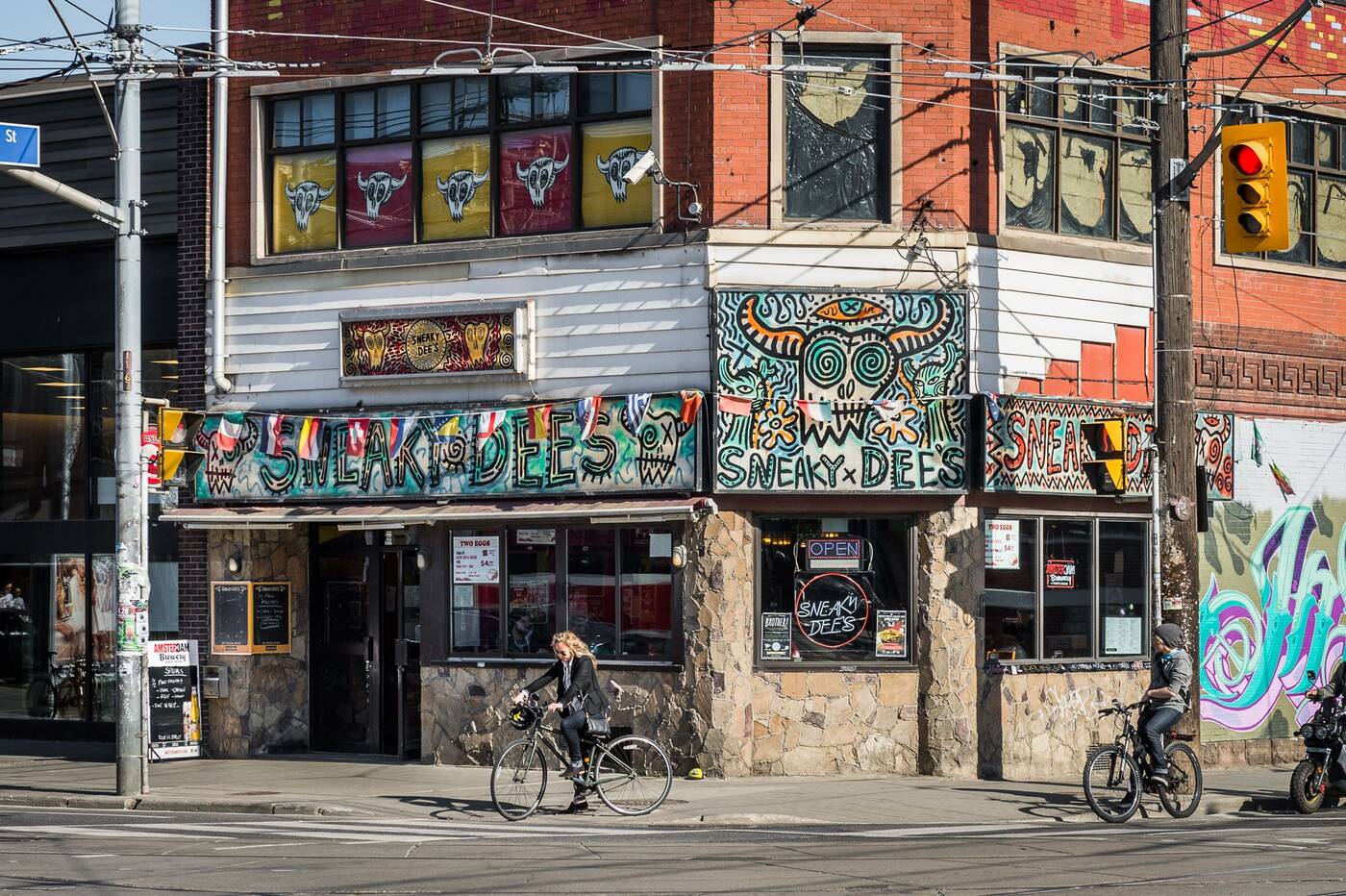 Sneaky Dee's has now been anchoring the southeast corner of Bathurst and College for 30 years. Photo by Matt Forsythe.

The documents, prepared by Toronto's Goldberg Group and the award-winning architecture firm Quadrangle, paint a clearer picture of what developer Ironwood Bay hopes to achieve with the project.

First off, they want to demolish all of the existing one and two-storey commercial buildings from 419 - 431 College St. This would include an RBC bank branch, a law office, and a handful of bar/restaurant spaces, including Sneaky Dee's.

Then, developers want to replace the old venues with a "13-storey, stepped and terraced mixed-use building with retail on the ground floor."

If approved as proposed, the building will have 169 residential units, 62 parking spaces, 186 bicycle parking spaces and multiple amenity spaces equating to roughly 132,500 square feet. Just over 7,500 square feet of space on the ground floor will be reserved for commercial and retail use.

A portion of that space may be the new Sneaky Dee's. 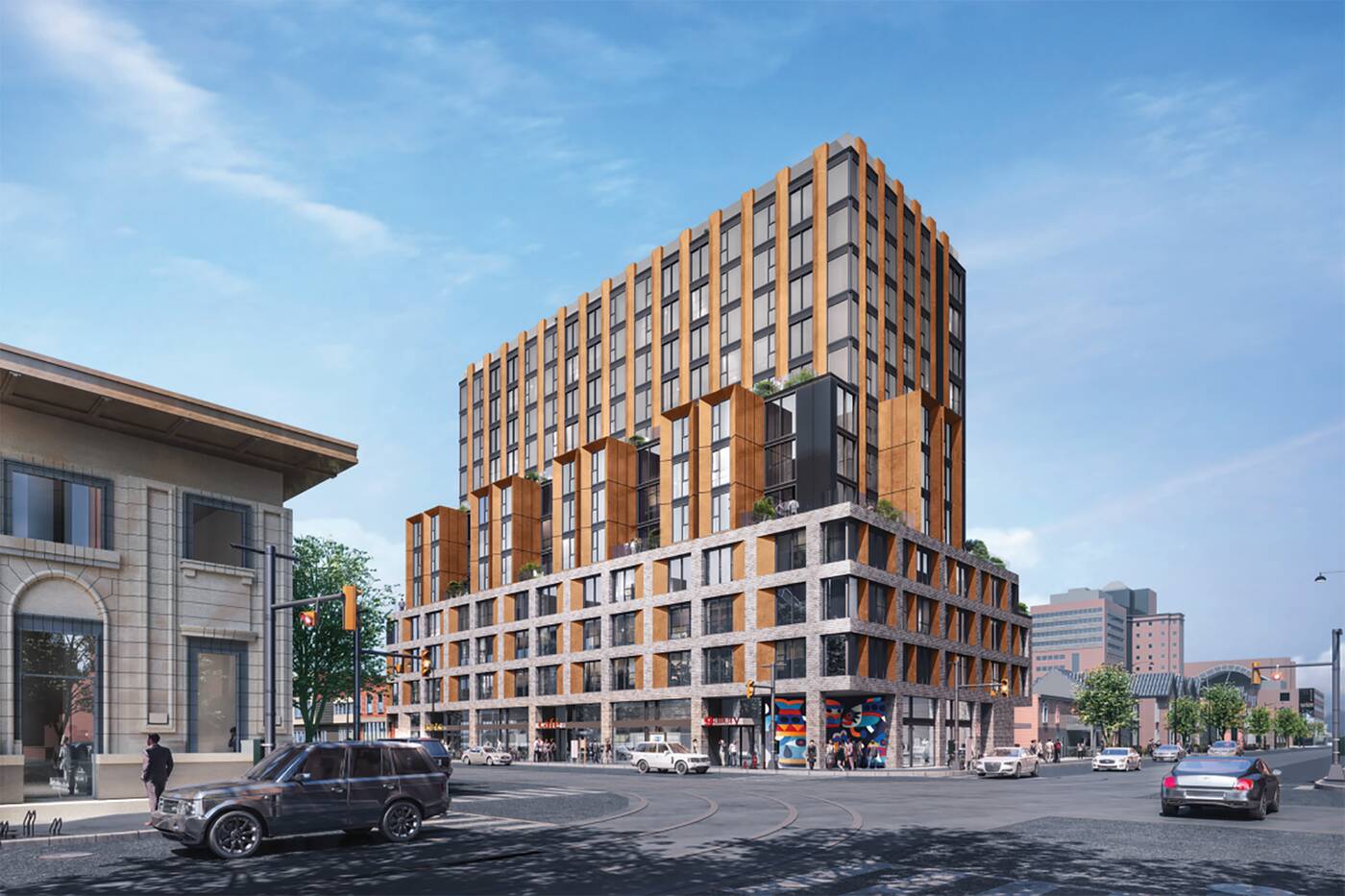 It's no skyscraper, but 13 storeys is still taller than what planning policies for the area permit. Developers have applied for an amendment to bend the rules. Image via Quadrangle / City of Toronto.

"The proposal contemplates the potential retention or replacement of one live music venue on the ground floor along College Street, potentially maintaining a cultural space on the subject site," reads a 123-page-long planning rationale document.

"Noise concerns from this potential new live music venue will be addressed at the site plan stage."

The proposal points out that the retention of live music venues is encouraged for mixed-use areas under the City of Toronto's 2019 Downtown Secondary Plan. It also notes that the building's proposed ground floor height of 5.4 metres "is appropriate as a possible music venue."

Only time will tell if the city agrees, and if Sneaky Dee's would even want to stay at the base of a brand new condo building.

There's still plenty of interest in saving the unique tex-mex restaurant, bar and live music venue as it stands: Nearly 20,000 people have collectively signed a pair of petitions calling upon Toronto Mayor John Tory to thwart the development in its tracks.

Tory and Ward 11 City Councillor Mike Layton have both expressed their support for the idea of saving Sneaky Dee's.

"Late Friday before the long weekend a developer submitted an application that includes the site of iconic Sneaky Dee's," tweeted Layton when the initial application came in.

"I've watched friends bands upstairs and eaten kings crown at brunch for as long as I can remember. We can't lose institutions like these."