Weekend events in Toronto is our guide to events happening this Friday, Saturday and Sunday. Here's what's happening in Toronto this Jan 25-26, 2014.

Toronto Design Offsite
Toronto Design Offsite (TO DO) is now officially underway - expect to see venues all over the city decked out in design exhibitions, immersive installations, and more by both emerging and established Canadian designers. Take a stroll in the Junction on your day off to contemplate the cluster of window displays, visit the Fermenting Cellar to peruse local artists' reinterpreted kitchen appliances, or enjoy an open bar before presenting your creative work at PechaKucha Night. Read our guide to the fest here. Until January 26, various venues.

The 2014 Toronto International Design Festival
This 16th annual design fest is now underway, and there are plenty of exhibits and activities for both the tradeshow-averse and their more tolerant counterparts. The festival seduces some of the best designers and craftspeople from around the world, while also highlighting Toronto's stars in the realm of interior design. With 300 hundred exhibitors on the show floor, something is bound to dazzle you. January 23-26, Metro Toronto Convention Centre North Building (255 Front Street West), various times, various prices.

Come Up To My Room 11
Attention fans of art and design: Come Up To My Room 2014, one of the year's most anticipated art events, has filling the Gladstone with curious installations. $10 gets you in to see 25 installations by 40 Artists. See a photo gallery preview here. There are a couple of parties, too: The opening reception is Sat Jan 25 from 7-11pm, and the Love Design Party later on Saturday (10pm-2am) is free. Until Sunday, January 26, Gladstone Hotel (1214 Queen Street W), $10, various times. 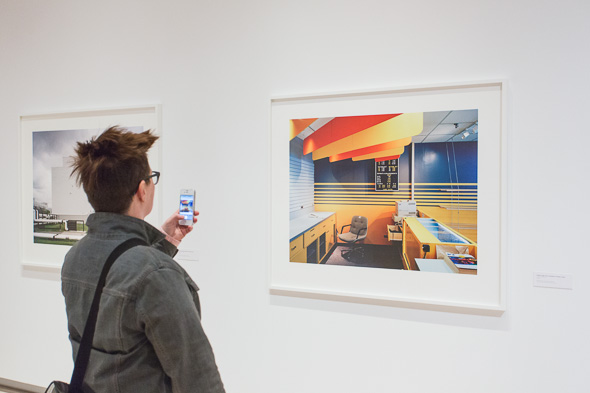 Roundhouse Winter Craft Beer Festival
Bundle up - and I mean gloves under mittens, people - because the outdoor Roundhouse Winter Craft Beer Festival is on this Saturday from 11am to 5pm at Steam Whistle Brewery. A new block of tickets were released earlier this week, but they're sold out and only a very limited number remain available at the gate. Saturday, January 25, Steam Whistle Brewery (255 Bremner Boulevard), 11am.

Midnight MRKT at 2nd Floor Events
You know what's better than shopping during the day? Shopping at night. Full disclosure: I'm actually a vampire who can't enjoy most things the city's shopping scene has to offer, which is why I love Midnight MRKT. Check it out here. This pop up market will take place on King W and feature music, drinks, street style food, and tons of stuff to buy - but no hand crafted coffins? No artisanal blood? My niche, someone needs to fill it. Friday, Jan 24 9pm - 1am, 2nd Floor Events (461 King St. W.) $5. 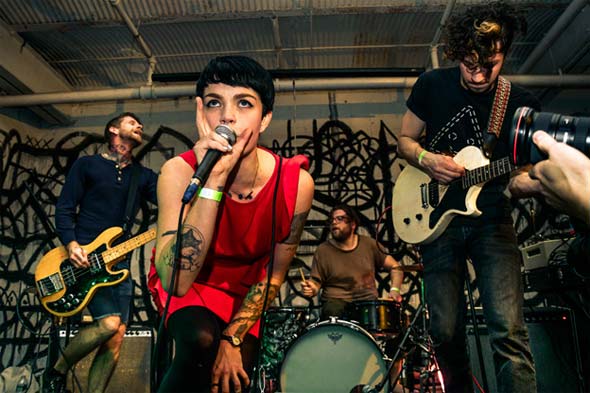 Perfect Pussy
This Syracuse punk band, recently signed to Captured Tracks, has the name you wish you came up with and the sound to back it up. Perfect Pussy have screwed with noise in just the right way to achieve that illusive hype blisspoint that isn't annoying (it will never not feel fun to Google Perfect Pussy), so this should be a great tour for them. I'll stop talking, just go. January 25, Silver Dollar (486 Spadina), 9pm, $10.50

SINS' I Die vinyl release
We named I Die as one of Toronto's top albums of 2013 and called it "too dark for a summer album" - now Pretty Pretty Records is releasing the album again, this time on vinyl and during the dead of winter. Check it out: "Possibly Toronto's most overlooked album of the year is ϟ†Nϟ' debut full length. The disc features guest spots by Anna Coquette, Rich Forbes (Mauzoleum), and Ell V Gore, and while the retro-meets-internet production alone is bliss for the blissless, the decision to bring on guests gives it an extra push." Huren, Vierance, and Candle Eater are on the bill as well. Friday, Jan 24, White House (277.5 Augusta Ave), 8pm, $5.

Akua at Class of 2014
Akua's solo career is off to a promising start, having received musical comparisons to Rhye and Jessie Ware, and opened for Katy B, Solange and Cody ChesnuTT. She spent 2012 making herself seen and heard at NXNE, Pop Montreal , CMW and Tinderbox Music Festival. Following that, 2013 saw the debut of One's Company EP, which caught the attention Pigeons & Planes, Okayplayer, MTV Iggy, Exclaim!, Yours Truly, IndieShuffle and Earmilk. She'll play tonight at the Class of 2014. Friday, Jan 24, The Silver Dollar Room (486 Spadina Avenue), 9pm.

Flesh + Blood: The Films of Paul Verhoeven
There are two likely occasions that prompted this retrospective (other than the fact that there has never been a Paul Verhoeven retrospective in Toronto before, but that's a criminal matter for another time and place): one is the the upcoming release of the RoboCop remake, which is destined for equal parts 'why God why' and 'yes Oh yes' reactions next month; and the other is the mid-April release of local critic Adam Nayman's book It Doesn't Suck. January 24 - April 4; TIFF Bell Lightbox (350 King St W) various showtimes. 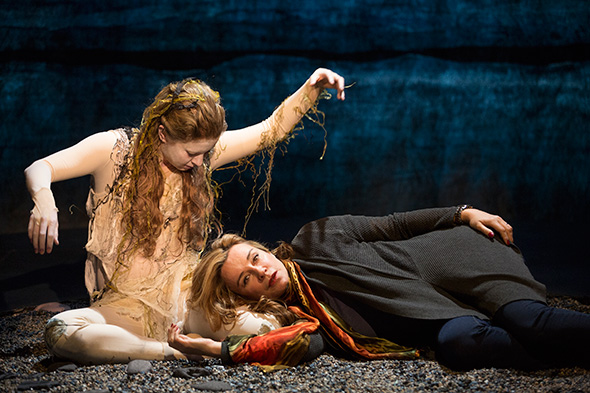 Flesh and Other Fragments of Love
At the centre of Evelyne de la Chenelière's Flesh and Other Fragments of Love lies the pale, lifeless corpse of a young woman which has washed up on the beach of an Irish vacation village. The body presents less an invitation into the events that led to her demise and more an entry point into the relationship of a married couple transfixed by her discovery and by that which she represents. Read our full review of the show here. Until February 16, Tarragon Theatre, various showtimes.

The Toronto Zine Library's 2014 AGM and Potluck Party
I love the Toronto Zine Library, and you should too. This potluck will help determine the next 365 days of the library's goings-on, which are a mystery to most. While this event isn't really free (you should bring food and zines to share) there won't be any money changing hands. Unless you want to reward your favourite zinester for writing your favourite thing ever. Which you should. Tranzac Club (292 Brunswick Avenue, 2nd Floor), Saturday January 25, 6pm, free.

Boozy Bingo
The addition of booze to bingo is something grandmothers and favourite aunties have had figured out for centuries, but now the rest of us are catching on too. Hit up Second Floor Events on Sunday where the first five Bingo cards are $5 and apparently there will be food. Sunday, January 26, 2nd Floor Events (461 King St. W), 3pm, free.

Debra Digiovanni
Debra's followed the career path of many successful touring comics from Toronto. A graduate of Humber's Comedy program, she went on to compete for the Tim Sims Encouragement Fund, win the Canadian Comedy Award for Best Stand-up, and tape a Comedy Now Special for CTV back when that still meant something. Appearances on CBC, MuchMusic, Canadian Idol, and even Last Comic Standing followed. She's one of a select few Toronto stand-ups that performs her own theatre shows - no easy feat. Friday, Jan 24, Winter Garden Theatre (189 Yonge), 7pm, $50

Beerprov: The Main Event
Beer and improv - need I say more? Armed with audience suggestions, you'll see an all-star cast put on one of the best shows this month. Your producer, Jim Robinson, is himself a veteran of the improv scene, having performed in numerous Second City shows and seeing his troupe Fratwurst play at the NYC Sketch Comedy Festival. Luckily, the audience's suggestions are handed in before the show, because given the late start time, and the day of the week, and the name of the show, it's best not to ask the audience members to be coherent after the first 20 minutes. Friday, Jan 24, Comedy Bar (945 Bloor), 10:30, $15.

Kaytranada
Monreal's KAYTRANADA has been DJing since age 14 and now you can shake your stuff to the results of his relentless dedication to sound. Expect (via the man himself): Hippy Hop, Stuff that'll make you dance, Stuff that'll makes you do moshpits, stuff that makes you wanna have sex with and neckbraking beats." (sic) Tonight you get get as weird as you are physically able to get with him at the Hoxton. Friday, January 24, The Hoxton (69 Bathurst Street), 10pm.

BNE Winter BASS Guide
While it's not quite time for the Toronto Jungle Party, you can see Toronto's guru of everything DnB, Marcus Sills a.k.a. DJ Marcus Visionary (whom re recently interviewed about Toronto's drum and bass scene) do his stuff at Detour tonight. Detour Bar (193 Baldwin St), Friday Jan 24, 10pm, $10.

2014 LunarFest
The Harbourfront Centre will bring in the year of the horse this weekend with - wait for it - the largest rocking horse on earth. "The Horse and I," will be a two-story-tall installation. There will also be lantern decorating, dumplings, and more. Can you ride the rocking horse? That is the million dollar question - but the event is free, so just go and find out. Harbourfront Centre (235 Queens Quay West), January 25 - 26, 11am - 7pm, free.

Uber-SWAP
Join Nathalie-Roze & Co in Leslieville this Saturday for the winter edition of Uber-SWAP: an eco-friendly clothing exchange. If you ladies have at least 10 pieces of gently used clothing or accessories you're ready to part with, bag it up and bring it over along with $10 for admission. Spend a couple of hours scavenging for new treasures and leave with a brand new bag of stylish garb! Saturday, Jan 25, Queen East Presb. Church (947 Queen Street East), 11am - 2pm.