Get to Know a Chef: Sean Riehl, Seven Lives

It seems there are few things Torontonians won't eat out of a corn tortilla, and Sean Riehl, chef of the tiny taco stand Seven Lives in Kensington Market isn't one to disappoint. After spending years enjoying southern California's finest tacquerias, Riehl is eager to recreate his experience here. Riehl shares one of the best tacos he's ever eaten, why his taco will survive the trend, and what his future restaurant might look like.

I've always wanted to be a chef. I don't 100% consider myself a chef right now; I've been doing it for 10 years, and went to school and did all the training, but I still think that's a title that should be given to somebody, not something that somebody gives to themselves. My mom's Korean, so I've grown up with a lot of good food, and my grandma cooked everything too.

I've been in Toronto for almost 3 years. My mom's family is out here in Toronto. I always wanted to do a taco shop, but it isn't realistic to open one in Southern California because there are so many. 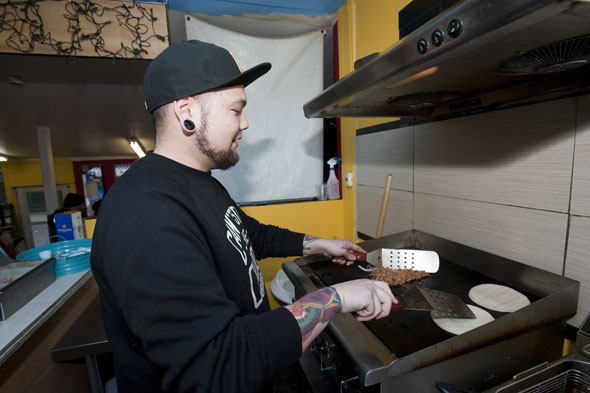 Where did you learn to cook tacos?

I actually taught myself. We would always go out and eat them when we were younger. I'd go to Tijuana with my friends and eat tacos there. So I just knew what flavours to look for, and when I came up here I just had to kind of make up the recipes myself and figure out how to do it and do some research.

What was your first memorable taco experience?

It's hard to say, because I was so young. One of the most memorable tacos I've ever had was at this place in San Diego. My friend Alex took me there, and they specialize in smoked marlin tacos. I ordered one, and the first bite I took was amazing; there was all this flavour, so much texture, and as soon as I ate it I knew I had to learn how to make it. That's our signature dish right now and it's inspired by that restaurant.

The taco trend exploded last year in Toronto. Do you think the obsession is fading out?

I think it is dying out, and I think that's a good thing. I think it went a little too crazy; there are all kinds of gourmet tacos coming up--gastro-type things--and tacos should be really simple. One thing I wanted to do was just bring it back down to earth, and make it simple and tasty again.

Any predictions for the next big food trend of 2013?

What makes a good taco?

The most important part of a taco, I think, is the filling. The filling should have a lot of flavour and texture. A lot of times people get too caught up in sauces and what's going to go on top, but the most important thing is that the filling and two or three good toppings complement the flavour. 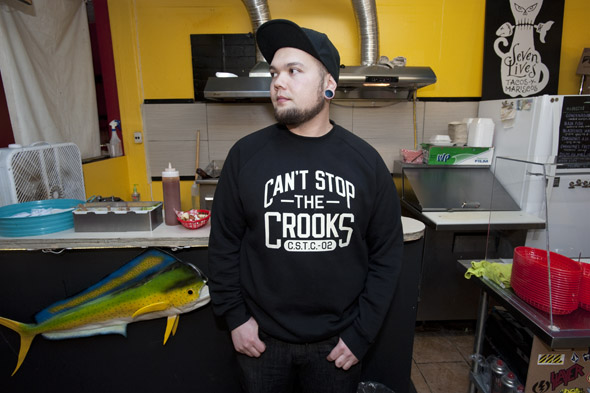 What are the main challenges associated with operating out of your Kensington Market stand?

On weekends we can get really busy, and then when we do prep, storage is a big issue. A lot of times, halfway through the rush, we'll have to re-prep again which is really challenging. There's hardly enough room for two people, and I have to bring a third person in on the weekends. Sometimes the lines get out of hand, and I feel really bad for everybody else here, because we'll take up the whole area with our line, so that's a big problem.

Is moving to a larger, more permanent location in the works?

We're hoping to expand later on this year, in September or October. That's when our lease ends here, and then we'll be looking for our own place--nothing big, nothing fancy, just someplace to call home.

Any specific neighbourhood you're drawn towards?

I love Kensington Market, and I've gotten to know a lot of people here. Everyone's really nice, so I'd like to stay here; I mean, I have some really great customers. But I really like the east end--Leslieville, that's where I live--and I think it's really an untapped market. There are too many Irish pubs out there. (Editor's note: we agree. Please open in Leslieville)

What's next for you as a chef?

Besides Seven Lives, we have a couple of other ideas we want to do. Mostly Mexican-style, but then I've always wanted to do a Korean restaurant, so that's a big thing. That could happen in the future, like the next ten years.

What do you like to do for fun when you're not in the kitchen?

Normal things: watch football, go drinking, eat. I like to eat a lot. I like to go to the cottage and go fishing. I'm a pretty normal guy. 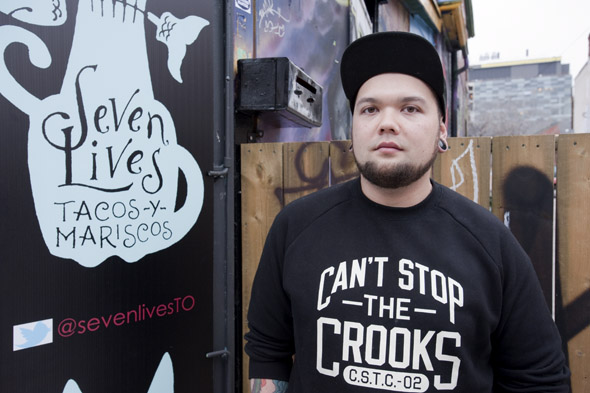 A chef that inspires you? My friend, Alex

What's one dish you can't live without? Japanese curry

What would people be surprised to find in your fridge? There's not much in there

One food trend that needs to end? Asian-inspired tacos