Get to Know a Chef: Zane Caplansky, Caplansky's Deli

For Zane Caplansky, it's not just about great food â it's "great feelings about great food" that make a restaurant. And that authenticity and comfort is exactly what this deli owner and food personality strives for in his own little corner in the city's west end. But that isn't to say his renditions of many Jewish classics aren't top notch; his smoked meat sandwich is arguably the city's best, which Caplansky spent years developing after being inspired by one of his favourites, the legendary Shwartz's.

I don't call myself a chef. To me, the term itself has a very specific connotation and I think of myself as being an important member of the food community of the city, but that doesn't qualify me as a chef. My dream had not been to be a chef or a cook, but to open a restaurant. Most of the recipes are my own, I love food and I love cooking, but to me there are different roles. When you're a great chef, it's something that requires consistency, creativity, constant technical learning and improvement, and it's an adherence to that craft that my interest has always been broader than that.

My brother taught me how to make some very basic things, like tomato sauce and how to grill sausages off a stovetop when we were in university. After that, I was pretty much self-taught, I did a lot of trial and error, following recipes, making what was in the fridge. And then when I was in Australia working in the coffee shops, I would have my head in the kitchen learning from the chef as much as possible. I went to George Brown college, worked under a chef when I was in BC who taught me a lot, and worked at Lolita's last year and learned quite a bit there. But I would say it's a combination of family. I learned different dishes from different people over time.

What's the best deli you've ever been to?

The best deli I've ever been to was Switzer's deli on Spadina where King Noodle is now.
On Sundays, I would always go to Switzer's with my papa, Sam. That's that place where deli attached itself to my DNA, the place where it was about my relationship with him. It was about fries, which were our secret because my nana would never let my papa eat fries. So it was always two corned beef sandwiches, fries and two cream sodas.

The reason that I sell cream soda here is because of that experience. Were there better delis or better food someplace else? Probably. But to a little kid, to have that one-on-one time with your grandfather, someone who you just adored, that's where those memories are shaped and formed, and that's probably why I'm sitting here today. 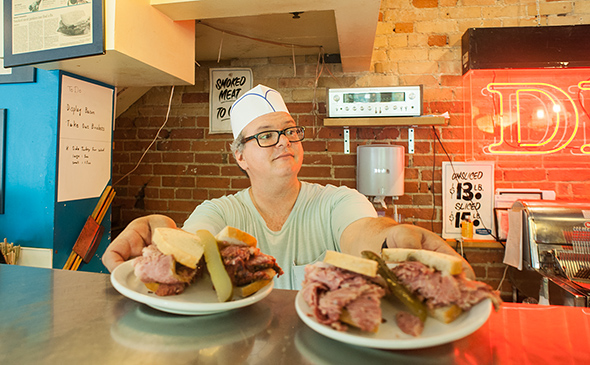 What's the secret to an amazing smoked meat sandwich?

Curing by hand is part of it. The fact that we select all the briskets, we cure them here in house, we apply our own spice rub, we smoke them here in house and we hand slice it. We go through the entire process ourselves, and that's what makes us special and that's what makes Schwartz's special as well. Corned beef that's made by a machine in some factory and that you warm up in a steamer or an oven and you put into a machine and slice it, it might have a nice flavour and it might be a great looking sandwich, but my trademark, my signature, is handmade the old-fashioned Jewish way. Kickin' it old shul, that really is what we're all about. 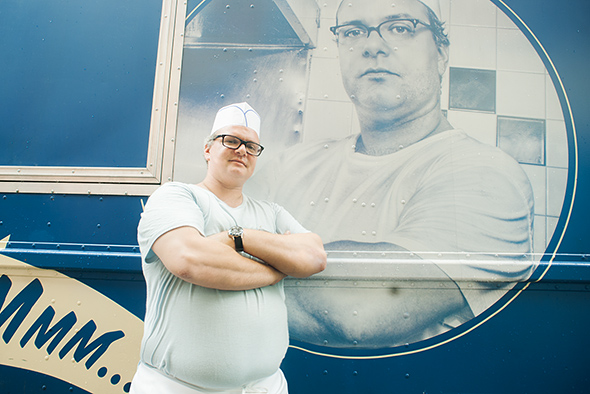 How's the food truck going? Are you still planning to launch a fleet of 'Thundering Thelmas?'

I love the food truck business, it's a great extension of what we do. There's so much potential, so much excitement, so much business to be had from these food trucks. Every weekend there's multiple festivals going on, and within a short radius of Toronto there are so many things that you could be doing. I could definitely see having four to six trucks in the Toronto area, between Mississauga, Etobicoke, Markham, Vaughn, Woodbridge, Thornhill, North York, Scarborough.

There's schools, businesses, parks, and just so much hunger for what we do. In those areas, I would like to have company owned trucks, and outside of those areas, franchised trucks. I've had inquiries from Victoria to St. John's, but I really want to make sure that it's consistent and we know what we're doing before we teach somebody else.

Beyond food trucks, what's next for you and the deli?

Back in the winter, a friend of mine had suggested that I should open a bagel shop, and it made perfect sense to me. And I had actually identified a store in Kensington Market that was available and was in intense negotiations with the landlord to take over the space. But the negotiations took three months longer than they should've. A bakery buyer for Loblaws called me and essentially placed an order for hundreds of dozens of bagels a day, without ever tasting a bagel.

And I was speeding down that track and then I realized we've worked so hard to get this place functioning properly, so hard to build a catering business, and to build a truck business. And to take your foot off the gas to learn the bakery business...maybe that isn't prudent right now.

So I kind of looked at that as a sign of maturity that maybe I'm starting to learn some of my lessons and that I'll be able to do it at the right time. My message is always the same: quality. And I don't want to do anything that's going to sacrifice the quality of this place, the catering business, the truck business. And when I put my name on a product I want people to know that it's going to be the best one they ever tasted. 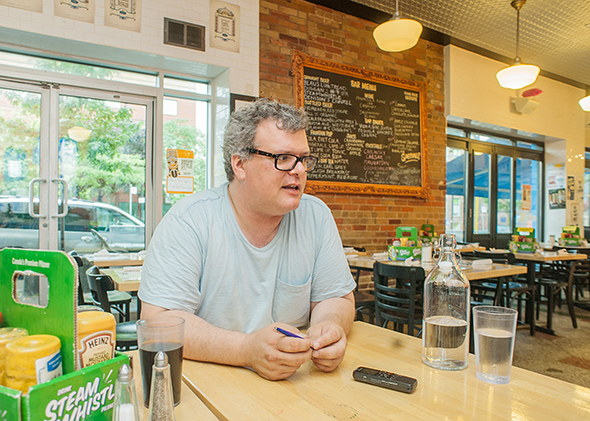 Is the deli still an endangered species? Or like barber shops, are a new wave of entrepreneurs going to ensure its survival?

David Sax wrote a book called Save the Deli that was originally supposed to be called "Death of the Deli." His publisher convinced him to change the title and the focus from the disappearance of delis to looking at the resurgence through people like myself, and a bunch of us in North America: Portland, Brooklyn, Berkeley. The Wall Street Journal wrote an article about artisanal delis as the next global food trend. I know that what we do here is really hard work. You have to have such incredible attention to detail and do it on a wire that's so high because of the volume that you're doing. It's just tough, I work six days a week and I care passionately for what I do, sometimes even too much.

I tend to eat at other people's restaurants, usually at least four nights a week. I go to the gym a lot, love to go to live music shows, and I love dance, movies, books. I love to cook at home and with friends. And I love conversation, and learning from people. I think I love the city more than most people do. Having spent so many years traveling around the world, I have an intense appreciation for what the city has to offer. I love the multicultural opportunities that this city has, the people that you get to know, the flavours that you get to experience. And I spend my time now becoming deeply intimate with the people and the places of Toronto. 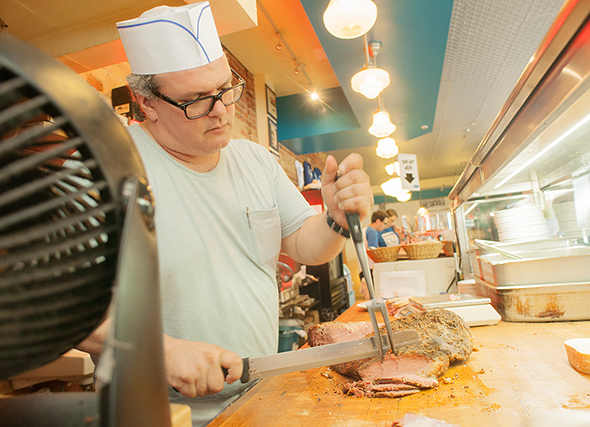 A chef that inspires you? Nathan Isberg

One dish you can't live without? Hot and sour soup at Lee Garden

What would people be surprised to find in your fridge? Mango pickle

What's one food trend that needs to end? Vegetarianism