Get to Know a Chef: David Neinstein, Barque Smokehouse

Chef David Neinstein of Barque Smokehouse knows barbecue is serious business. That's why he's taken time to perfect his tantalizing, carnivore-friendly creations with the techniques he's acquired south of the border. His restaurant in Roncevalles Village serves his renditions of the classics: chicken, ribs and the essential brisket. Neinstein shares some of his secrets to smoky, slow-cooked goodness, advice for the aspiring pit master, and another barbecue preparation he can't live without.

No, definitely not. My passion was in the business and hospitality industries, but I never imagined I would be a chef; I didn't think I was good enough, I didn't think it would work, I was scared. I thought I was going to be a lawyer.

Where did you learn your craft?

Mostly in Oklahoma and northern Texas. I lived in a small town in Oklahoma for two months working at a barbecue restaurant. It was one of the only restaurants in town, and it ended up being a great fit because they were really busy. I catered the one high school prom and a banquet. So it wasn't just a little barbecue restaurant, it was sort of an institution.

I learned a lot there and on my free days I learned how to compete at the Kansas Barbecue Society and became a certified judge. I just immersed myself in barbecue. And after I left I just went across the entire continent and just spent a lot of time eating and talking to people about barbecue. And then when I got back I got hired by this restaurant in London to turn it into a barbecue restaurant, so that kind of solidified it. 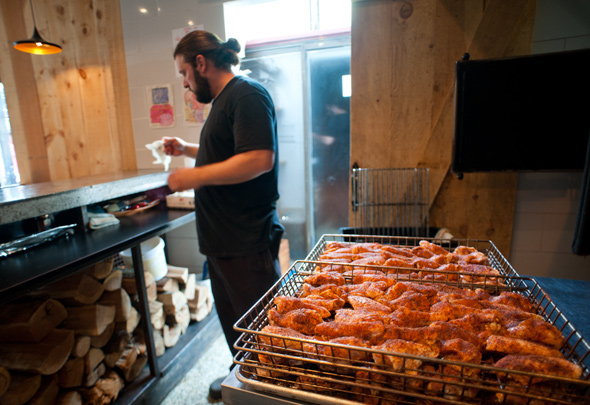 What's the secret to great barbecue?

The quality of the meat goes a long way, and you can't rush barbecue. If people take their time to cook things properly then they'll be rewarded with a great result. It's a very time-consuming process especially with the bigger cuts like pork butts or briskets. There are ways to save time, but in general, patience is a virtue.

What makes a great barbecue sauce or dry rub?

A sauce is a nice addition to barbecue, in my opinion. I'm very proud of our sauces, but I'm also happy if they don't get used because I believe that the meat is great on its own, and only enhanced by the rub. The very simple secret to our sauce is ketchup, not tomato paste, and I believe it enhances the product. The secret to my rubs is that I make them almost daily with fresh spices that I blend myself with the spice grinders. I cater every spice to every meat, and spices are easy - it's essentially just a third sugar, a third salt and a third spice. 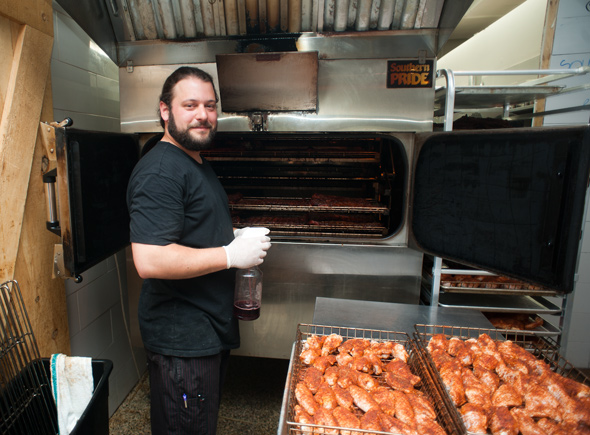 What cut of meat do you like to cook most on the barbecue?

I would say brisket because it's the most challenging, and I'm still trying to perfect it. It's really finicky and I'm happy where we've got it, but I think we can do better. There's a very short window for it to be done in the right way and I've screwed it up many times. To this day, even though we try to do it the same way every time, it's unpredictable. Some are seven pounds, some are fourteen pounds, some are a little more muscular than others, some are fattier - it's a tough meat.

A lot of the beef is from Texas, the chicken's from Ontario, and the pork is from Quebec. Our vegetables and fruits are sourced from a local company, but it depends on the season. We do serve corn year-round which means we're getting that from California in the winter - we'll go local whenever it's in season. We pay a little bit more for our fruits and vegetables, but we get better quality and end up throwing out less.

Any tips for barbecue chefs at home?

Trial and error. It's taken me literally thousands of pounds of meat to start to understand it, and I still have lots to learn. I would recommend starting with one dish until you get it right - don't go from chicken to ribs to brisket to pork butts. It's not hard if you do it enough to figure it out, because it depends what you're working on.

Most recipes are tough: the temperature, the smoke, and the airflow are very different on every barbecue, so I would recommend the home chef pick one ingredient and make it all the time until they get it right, then move on.

Where do you like to eat barbecue in Toronto?

I love the Stockyards, so that's where I would go for sure. Their fried chicken's amazing, the barbecue itself is fabulous, the fries are great - it's a great restaurant. 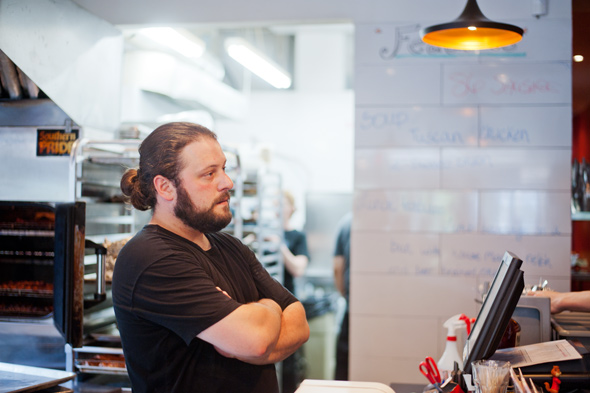 A chef that inspires you? David Chang

What would people be surprised to find in your fridge? Kewpie

What's one dish you can't live without? Peking duck