Nick Auf Der Mauer won't call himself a foodie, in fact, he doesn't think the term accurately describes the level of interest people have in food. But the chef isn't any less passionate about his product, now running the widely popular Porchetta & Co., a tiny shop on Dundas West serving humble, yet rightfully addictive pork sandwiches Auf Der Mauer developed in his own kitchen. I sat down in a nearby diner to discuss his original aspirations, his reservations over the food truck hype, and of course, his love for pork.

No. At first I wanted to be either an architect or an archaeologist, if you can believe that. I just had an interest in both of those things growing up, but I guess becoming a chef kind of evolved naturally from cooking with my mom at home. So that's where I think my passion and interest in cooking originated from.

My first restaurant job was at McDonald's when I was fifteen.

Why are you so into pork?

Pork is one of those animals that's so versatile, if not the most versatile animal that you could choose. And it's one of those foods that appeals to a wide range of people. A lot of people like pork culturally, ethnicities have pork as a major part of their diet. And especially where we're situated in Little Portugal, bordered with Little Italy and Chinatown, you have three cultural communities that all consume pork. 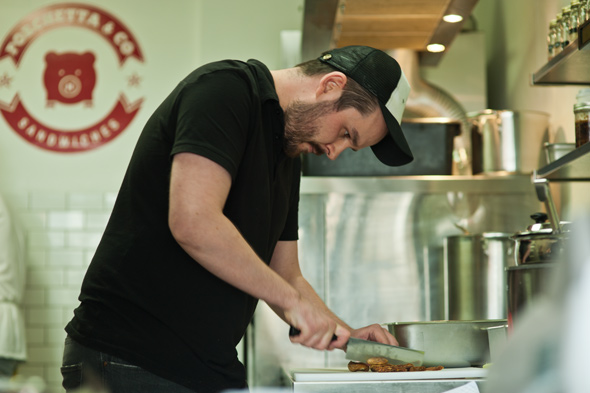 What's your biggest tip for those preparing pork at home?

Don't overcook it, essentially. I think a lot of people have the tendency to cook it through until it's well-done, dry and rubbery, and it's not necessary. You can have a great, well-marbled Berkshire pork chop that you could go get at your local fine butcher shop and you could cook that to medium and you're not going to have any issues with it - it's not going to make you sick. It's just so different from what you've been used to growing up, like your parents cooking pork for you and just cooking the hell out of it.

How do you test new sandwich combinations?

For the most part, they slosh around in my head for a couple weeks or months. And by the time they come out to me making one, it's kind of where I want it to be. But ultimately, we try it on ourselves. We make them as a team and we all say what we can improve upon and how we can make it different or better, and how it's going to function in the service. Just as a team, we kind of break it down and figure it out.

We get suggestions all the time. I get told that I should have applesauce and roasted peppers and sautĂŠed onions, all these things. And all those things would be great, but at the end of the day we still have to keep in mind what the concept is and stay within certain parameters to a degree. And some things, as good as they may be, aren't going to work. And we have such limited cooking area and space that it's difficult to throw in monkey wrenches here and there and keep everything moving efficiently and consistently. 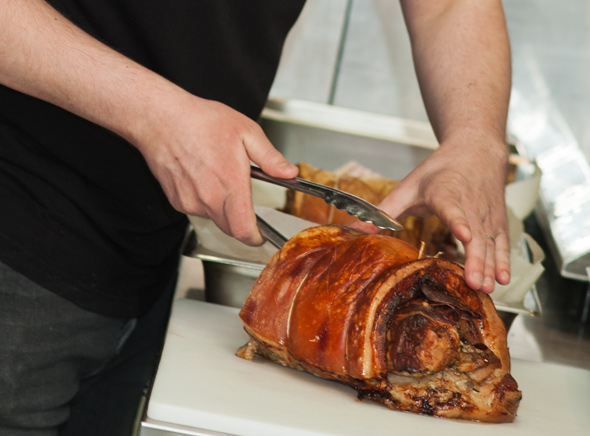 Aside from you, which restaurant makes the best sandwich in Toronto?

I'm going to cheat a little bit and say Burger's Priest. It's not technically a sandwich, but I think they make an amazing burger. And if I wasn't open I would be supporting them on an even more frequent basis. I just like how it's simple, fresh, and just naturally tasty. There's no pretentiousness in the food, it speaks for itself and it's just good stuff.

I don't know. I like all protein, but I guess if I had to say one, maybe turkey? It's tough for me to answer because I would eat anything pretty much.

Would you ever launch a Porchetta & Co. food truck?

At this point, I would have to say no. I'm very skeptical about the whole food truck scene. Right off the bat, you have the City that's working against it. You can't park it in certain boundaries, there's a whole lot of licensing kind of issues around all that. But for the most part, we're a winter climate. We have bad weather except for this winter, you know, six to eight months of the year. And I don't think it's a very suitable food truck climate. And it's a lot of work. I give my hat to all the food trucks that you see in Vancouver and New York and San Francisco.

I'm happy where I am with the shop, and we have more than enough work to dish out. And I don't want to make it more complicated than it already is and I think the food truck would just be maybe too challenging this stage in the game.

Any plans for additional locations?

No plans as of yet. We're still wanting to improve upon our current brand as we have it now, always trying to make it better any way we can. So, who knows? There could be, but as of yet there aren't any plans to expand beyond our first location. 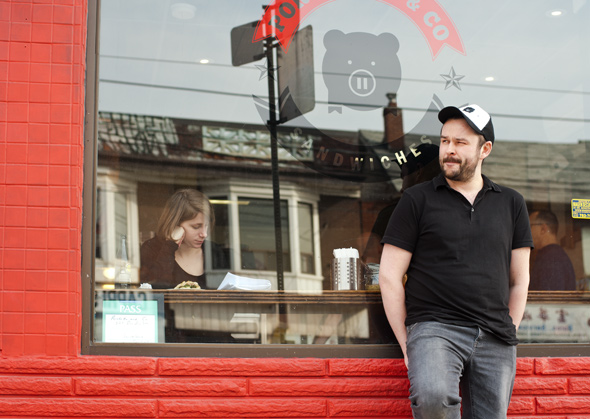 Can you win friends with salad? Yes

What would people be surprised to find in your fridge? Miso paste?

What's one dish you can't live without? Nachos

What's one food trend that needs to end? Cupcakes