Get to know a bartender: Scott McMaster of SPiN

Scott McMaster got his start in the service industry just down the street from his current digs at SPiN Toronto. 12 years ago, after a stint as a camp councilor he found himself unemployed and with lots of free time. His sister was bartending at Montana at the time (now The Ballroom) and as luck would have it, they were in need of a bus boy. McMaster quickly found his way behind the bar, first as a bar back and then, later as a bartender. Since then he's worked in more than half a dozen distinguished restaurants and bars, along side the likes of Susur Lee, Mark McEwan and many others.

Eventually he made his way into the competitive circuit, testing his creative mixing prowess against his peers — a process at which he's fared quite well. His next appearance will be at the Made With Love competition in the Distillery District at the end of the month.

I caught up with Scott for a quick game of ping pong and to talk about life on both sides of the bar.

How did you get into bartending?

It goes back about, oh, 12 years now. My sister was bartending at a place called Montana and they needed a bus boy at the time so I did it. Not even out of necessity, I just needed something to do to stay busy, so I just sort of fell into it.

Slowly, I learned more and more and more and suddenly one day you turn around and you're like "Hmm, I've been doing this for a long time, I guess I'm gonna keep doing it." Only in the last three or four years have I gotten into the whole competitive circuit. I've done fairly well, the owner of BartenderOne and myself won one of the events a few years ago, which got us a free trip to Poland and London. 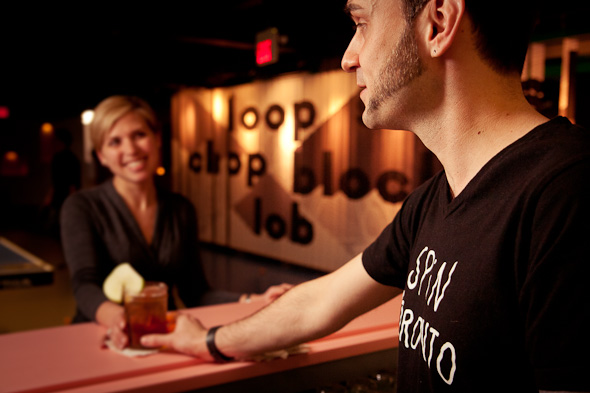 How often are you competing?

In a year I'll probably do four, but there are all different levels. Some will literally just be put on by the brands [like Bacardi], just one night, five people, no big to do. Other times they're big ticketed events like the one coming up, Made with Love. We just had the preliminaries last month and its coming up at the end of this month. There's 13 bartenders competing and, yeah, it's a lot of fun.

What do you like to do outside of bartending?

If I'm not on this side of the bar, I'm on that side of the bar. The running joke is that a bartenders best friend is a beer, just because if you spend a night making a ton of complex cocktails, or if King West shows up and you make 4,000 vodka sodas, all you want to do is sit down, relax, and crack open a beer.

Other than that, my lady and I have been collecting house plants, you know, we're very domestic. I've also recently taken up biking again. In the summertime is great, I don't live too far away from here — probably 10-15 minutes by bike — but probably 30 by TTC.

And when you're on this side of the bar, what do you drink?

Honestly, Labatt Blue. It's just something I grew up with, my Grandfather's dog was named Blue and I found out years later he actually named it after the beer. It's just kind of stuck with me, it's one of those things that's familiar and comforting. That's actually the hard part about creating a cocktail, people already kind of know what they want. They're not always ready to try something new. So that's my job to create something familiar, but still new.

Take for example, vodka soda drinkers. We've got a cocktail on our list called the York. It's a combination of vodka, grapefruit juice and a German apple liqueur. Super simple, three ingredients; it makes it easier for them to try something new. You know, vodka sodas have almost no favour, so we add a little something to it to make it interesting. 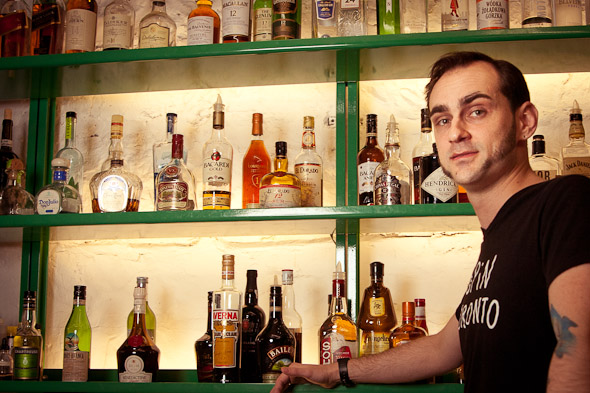 What is your approach to developing a new drink?

It changes, you can start with your brand (your spirit) and start there, or you can come at it the other way and look at what's seasonal or what's been canned or preserved. You know, you go around to markets and it's literally scratch and sniff. That's when the wheels start turning and you get the ideas and then you get home and remember you have this bottle you haven't used in a while.

For me, I'm always buying weird mixes. I'm the guy who actually buys that bottle of beet juice, just to see what I can do with it. When I'm developing a list, I like to try and do something with every major spirit on it — just so if you do get someone who is really stuck on what they like, you have something to offer.

How long have you lived in Toronto?

What's the next big thing in cocktail culture?

Right now, I hate to say it, but we're going back to bright colours and blenders. The daiquiri, but not the proper daiquiri, the blended abomination. I think we're going back in that direction — bright and showy. I hope I'm wrong, but it is going on. 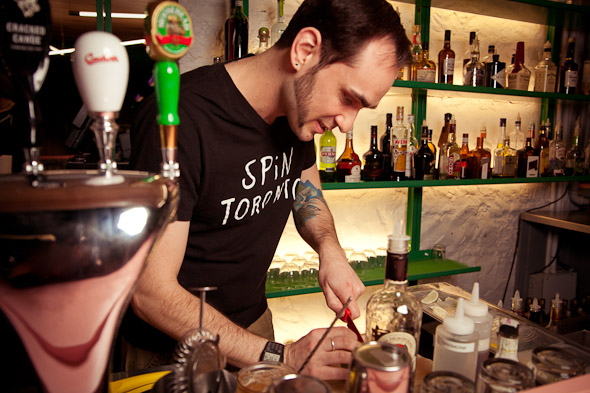 Where do you like to hang out when you're not working?

I like the Harbord Room, it's got everything. The food is fantastic, the cocktail list is wonderful — it's got everything new and old — they've got a great beer selection, their wine selection is on point for the neighbourhood. It's great. I'm also a sucker for seafood, so I love Big Daddy's Crab Shack downtown, you can't go wrong with a Caesar there.

I tend to know people at most of the places I go, so I just go places to visit my friends.

So what do you do on your days off?

I think, making people happy. If they're already having a great night and you make that one cocktail that just elevates it all or if they come in and they're in a terrible mood and what you have to offer cheers them up. Sometimes people are just looking for someone to listen to them, so you give them three or four minutes of your time and that just gets them back out of their rut.

And what is the worst part?

Making people happy (laughs). No, the worst part about bartending is probably the hours. You're living in a different timezone than everybody else. I would love to go to a nice vegetarian restaurant when I'm done work, you know, that's good for you and you feel reenergized, but at 4:00 a.m. the only places open cook everything in a fryer. So that's probably the worst part, the diet it kind of forces upon you. 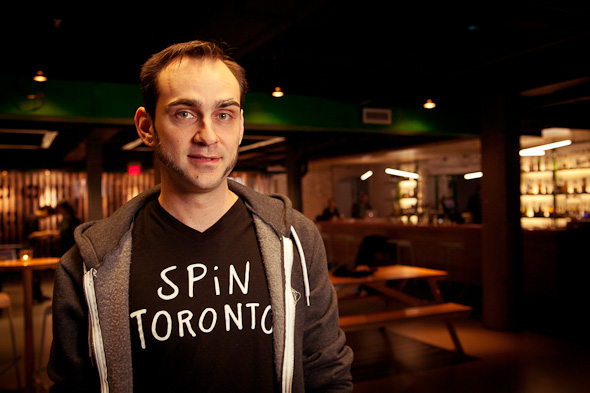 Straight Up or On the Rocks? Rocks

With a twist or olives? Twist