Toronto Through The Eyes of Charles Pachter

Charles Pachter is proudly and unapologetically a Canadian artist, whose paintings embrace national icons and force them through a pop art filter. He's also a Torontonian born and bred, and a lifelong booster for the city's potential, most of which was barely imaginable when he was born just before New Year's Day in 1942, in what felt like a town struggling to be a city, still in the grips of its very Anglican reticence and Presbyterian rectitude.

A childhood encounter with a docile moose at the Canadian National Exhibition - helpfully filmed by the National Film Board and documented by press photographers - gave Pachter his totem animal, and a lifelong amateur historian's obsession with the country's founders and pioneers have inspired countless canvases. The best thing about Pachter's work, however, is that you don't have to struggle to "get" it - rare among living artists, he doesn't hide behind thickets of artspeak or theory.

He's also that rare thing - a financially successful artist, and one who invested his earnings back into the city, building up an "empire" of renovated homes and warehouse spaces in the '70s, before losing it all in the early '80s recession. His current home, a modern marvel just a short stroll from the Art Gallery of Ontario, is his vote of confidence in the city's downtown - and Chinatown in particular - as the repository of Toronto's soul.

Here are a few excerpts from a long conversation with Pachter, just after the launch of his Luminato t-shirt for Roots, and the convocation ceremony where the artist received an honourary doctorate from the University of Toronto, his alma mater.

On being an artist in pre-Beatles Toronto:

"My little immigrant grandmother who called me 'Charle' because she thought Charles was plural told me, 'First you're going to university see if you want to be an artist, but a doctor is better.' Somewhere today she's smiling - now I'm a doctor.

"In prim, middle class Toronto in the '50s the last thing a person would have wanted to do was become an artist. My mother came into my room one summer morning and saw me on the floor painting and she said, 'You should be outside with the other kids - if you want to paint, paint the bridge chairs. Do something practical.' It was not something that was easy for me to come to terms with."

"My greatest pride is whenever people ask me about the moose - I say number one I grew up in the period of Andy Warhol but I pet a moose at the CNE when i was five years old. It was for a movie made by the National Film Board and I had the illusory impression that everything Canadian was glamourous. I was taken down to the Ex every day in a Chrysler woody wagon convertible and this was just on the cusp of the beginning of television, but the NFB was our MGM studios - they had orchestras and composers and Lorne Greene narrated this thing.

"It was a bombastic little movie about the wonders of the Ex after it had been closed for 6 years during the war. So there i was at age five being kissed by Barbara Ann Scott and meeting Joe Lewis, the world's heavyweight champion and I pet the moose! It left some sort of seminal impression on me. I grew up in an era when all Canadian art magazines were full of stuff about Americans, and the very idea - I was always dumbfounded that they wouldn't put us on the same level field. That was the post-colonial thing. Was it my fault my grandmother emigrated to Alberta instead of Montana? That's when I began to study the whole phenomenon of the loyalists and WASP culture - I said how come, if you're from here, you're deemed to be inconsequential? Where does that mentality come from?"

On Toronto's creative bohemias, and his real estate empire:

"I grew up at Bathurst and Eglinton and I came back from France determined that I was going to be in the Toronto equivalent of Paris - not that it existed. But I rented my first home and studio down on Shaw Street at Essex near Christie Pits. It was a little old blacksmith shop and grocery store and I turned it into a printmaking studio and I had all these draft dodgers living there, kids from the states who were coming up in the '60s.

"Then I bought my first house at Shaw and Marchmount and we made an enclave - everybody from Margaret Atwood to Maya Anderson to Janet and David Hunter - all these people in the arts, we all bought houses on this one little street, Marchmount, for $24,000, $28,000. We had volleyball teams - the Marchmount Morons versus the Shaw Street Crybabies. that was our bohemia. Then in 1973 I bought my first building on Ryerson Avenue, right beside Theatre Passe Muraille and renamed it Artists Alliance. Atwood loaned ten grand - 20,000 square feet plus parking for $100,000. Today the same building would be $3 million.

"That was our bohemia around Theatre Passe Muraille - I helped Paul Thompson buy the building, and I called it my ten loft years, because from '73 to '83 I built up an empire only to lose it all in the recession of '81 and '82. Kids today don't know what a recession was - interest rates are still four per cent. They went to 24 per cent and we were just killed. Decimated.

"As you know artists - and Richard Florida has picked up on this in such a big way - artists generally go where others don't. We see the potential where the average middle class person wouldn't dream of going. I bought my first house in the heart of Chinatown in 1977, an old dump around the corner. Why? Because it was near the AGO and Queen Street. By the time I'd gotten over Queen Street I decided I needed some peace and quiet, enough with all the craziness. The craziness was in my '30s, and by the time I reached my forties I was ready for something a little more stable.

"I've renovated over 24 old dumps in Toronto over the years and loved every one of them. Fanny (Silberman - Pachter's late real estate agent, mother of Supreme Court justice Rosalie Abella) used to say 'you don't fall in love with your real estate - it's dangerous.' But I did, and then when I lost it all my friends thought I was going to kill myself. I said nah - as long as I've got my health. It was a rough go, to watch my empire crumble, and now I'm feeling so philosophical because kids today don't know who I was or what I did.

"Somebody did this thing at the Power Plant about the Queen Street years and I wasn't even mentioned. I didn't take it personal - they just didn't know, or I wasn't part of their knowledge base. This too will change because I've been asked to do my memoirs by Cormorant Books and I've gotten so much visual material from that period. All the people who came to Gracie's - that was my restaurant."

On Toronto's recent architectural "renaissance" and the AGO:

"I am somewhat concerned that for all the boosterism, we haven't really done anything phenomenally original. For me, and with all due respect, when they hire international starchitects - I worked at Expo 67, so I can tell you that, for me, the AGO looks like the Italian pavilion from 1967. It's this very in your face facade which is too close to the street for me.

"What are big public art institutions supposed to do? For me they're the repositories of the wealth of very, very influential capitalists, and that the public has to go in there and look at 11 galleries of Cornelius Krieghoff because that's what (Ken) Thomson's proviso was when he gave them money - hello? One gallery of Krieghoff would have been enough, with the Currier & Ives toboggans and the prints and all the rest of it."

On his neighbourhood, and why he loves Toronto:

"On a cold January night I can walk across Grange Park with snowflakes on my nose and I'm at the opera or the ballet - this is unbelievable. Up the lane, right now - three boxes of strawberries for a dollar. It's all right there - in the middle of winter my neighbour Marci is saying, 'Did you see - five cauliflower for a dollar!' I say, 'What am I going to do with them?' She says, 'We'll make soup!' It's amazing how industrious and benign the Chinese are, and what a joy it is to be living in a refuge like this in the middle of the city.

"You walk out the door and it's cacophony and noise and industry and Spadina, twelve peaches for a dollar, so you can have everything you need if you're a single guy like me, just go out the back door and everything's there. That's the New Yorky thing, and it's wonderful. And there's a decency about our culture that is nothing we should take for granted. It's part of that whole Loyalist legacy, how they came up here after the British had lost Boston and Philadelphia and New York, they created Toronto." 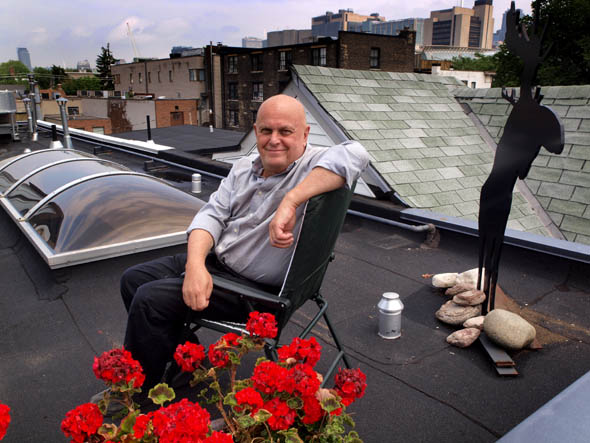