Toronto Through The Eyes of Mayor David Miller

Mayor David Miller announced his intentions not to seek re-election back in September but just because he has less than a year left in office doesn't mean he's ready to kick up his feet.

After his recent trip to Copenhagen, our big blond mayor seems energized about his last year in office -- garbage strike detractors be damned. Here he weighs in on the current state of the city and his role in shaping it for the last seven years.

Some time has elapsed since you announced your decision not to seek another term as mayor. How do you feel about the decision?

I'm happy... it was the right decision. I pretty much made [the decision] after the last election, because when I first started running for mayor, my daughter was seven and my son five. If I ran again and won -- and I was absolutely certain that I would've won -- my daughter would be in university.

It's such a privilege to be a mayor because you not only get to pass things at council, you actually get to see them happen on the streets in real time. But it's even more of a privilege to see your son and daughter blossom into a lovely young man and lovely young woman, respectively. It's time for me to spend more of my energy being dad, and less pursuing my own career.

How does it feel, now as a bystander, to watch other candidates throw their name into the ring?

I think the new candidates are going to have to answer a pretty powerful question: "Why?" None of them have [answered this question]. Not one. Go look at their remarks. When asked "What is it you want to do?" they can't articulate it. I've always thought that in politics you should run for office because there's something you want to accomplish... that you are uniquely in a place to accomplish.

I'm going to be in the interesting position in the next year of being the mayor, doing the right things, implementing my mandate, and telling people why. And the people who seek to be my successor are going to be held by Torontonians to the same very high standard. 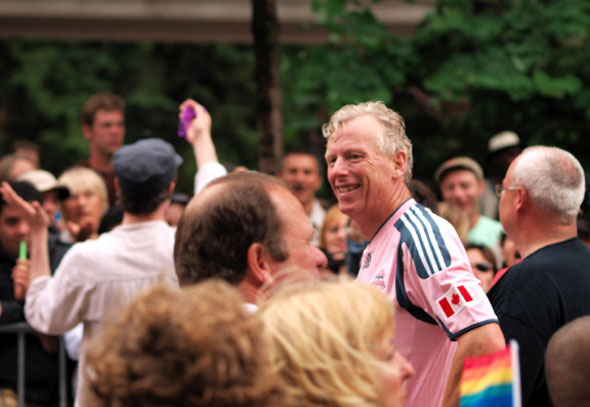 You live in High Park. What is your favourite part of living in that neighbourhood?

I love it because it's so incredibly diverse, both from the perspective of residents' personal backgrounds and economically. [There are] people from all walks of life. You have people from working-class backgrounds, well-off people (although I don't spend too much time in that area), and you have middle class folks. It's a microcosm of Toronto, which is a microcosm of the world... which makes it exciting.

It's located close to Lake Ontario, and I like to run. I run down by the lake as often as I can -- four to five times a week (when I'm not nursing minor injuries). The neighbourhood is centered by High Park, so you've got beautiful, natural features. And it's within walking or a short transit distance from BMO Field at Exhibition Place, the home of Toronto FC, the best show in town.

What are some other favourite parts of the city for you?

I like the Danforth; it's vibrant, alive and interesting.

I love Gerrard India Bazaar. At Nucreation, people come from all over North America to get their wedding clothes. [It's] a fantastic little store in Toronto.

You just came back from Copenhagen. What are some of the things that Toronto can do to address the environmental issues facing us all?

The good news is that we're already leaders. We're one of the best cities in the world because we're doing everything.

Some cities like Johannesburg and Jakarta are improving public transit; they've got rapid projects similar to our LRTs, but using buses. Some cities are building retrofits; some are doing LED lights; some cities are doing electric cars, and in Toronto we're doing everything.

What I took back is that we've got all the right strategies, but now we've got to implement them. For example, we passed our energy strategy a couple of weeks ago at council. It says that our greenhouse emission goals are Kyoto plus -- i.e. Kyoto, and then 80% reduction by 2050. We can beat that -- in buildings, transportation, and energy. [For] buildings we've got a strategy like the Mayor's Tower Renewal, and if we can complete that strategy, in things like our green building code for new buildings, we can meet the goal for buildings.

For, transportation, Transit City is helping us meet our goals and is literally under construction -- the groundbreaking was Dec. 21. And energy... that's the key for the remainder. Our energy strategy puts conservation first, because if you conserve, you never need the energy in the first place. We also have demand management and green generation... for example wind, solar, and geothermal.

One of the things that I saw in Copenhagen was the scale to which cities are making efforts. We had cities representing about 700 million people in their regions there... that's one out of ten people in the world. Scale that up a bit with some partnerships with national governments, and you can make a huge impact on reducing our footprint on the planet and creating good jobs at the same time. And we can do it now. We don't have to wait for some theory. We don't even have to wait for an agreement. 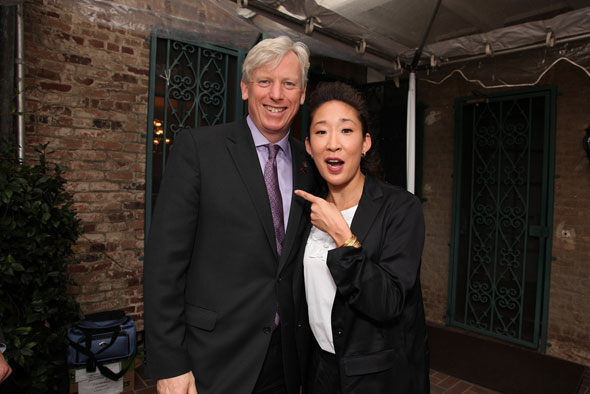 What other lessons can Toronto draw from progressive international cities?

I think the big lesson is about taking action. We've got the right strategies. We're cautious here historically; we do a lot of pilot projects. It's about turning those good ideas into action. That's the lesson to take from other cities.

You have your fair share of detractors. Do you feel like you have to defend your record?

Well, I've got another year as mayor, and I think people will look and see. In any position like this, you've got critics, [but] on the other hand, I got nearly 60% of the vote last time. I must have been doing something right.

You've been part of some ambitious projects. Which ones are you the most proud of?

Transit City, our environmental initiatives, and our Community Safety Plan. We've reduced crime in every area, moving from what was already a safe city, to one that is much safer. [We] haven't completely grappled with the gun violence, coming from the drug trade, but our safety strategy was about a partnership with the police who are preventing crime, instead of just punishing people. Also [it's] about building on the strengths of neighbourhoods by focusing on young people to help make sure that they have real opportunity. I think that's the way you build a city.

What are the odds we're going to see you in furniture commercials when you're out of office?