Toronto Through the Eyes of Mark McEwan

Mark McEwan, Toronto's homegrown celebrity chef, is currently on a quest to grow his food empire across the city. He boasts over 30 years of experience in the fine food industry, and opened his first restaurant, North 44 in 1990. From there, he set his sights on downtown and opened Bymark in the Financial District in 2002. His gourmet food (and gourmet prices) then seemed perfectly at home in Yorkville when he opened One in the Hazelton Hotel. If that weren't enough, McEwan recently opened up a gourmet food market at the Shops at Don Mills, called simply McEwan. You're also not safe from McEwan's food domination at home. He can be seen on his Food Network series The Heat on Fridays.

What neighbourhood do you currently live in?

I live in Yorkville. We live at the Hazelton Hotel. We live above the store, as they would say.

Why the switch of neighbourhoods from Forest Hill to Yorkville?

We're emptynesters now and we really didn't want to take care of a big backyard that we seldom ever use because we run to the cottage or we run to Florida. The house is where we live during the week and sleep.

You have restaurants all over the city. What drew you to Yonge and Eglinton, Yorkville, The Financial District and Don Mills?

I looked for a demographic. I looked for my client base. Don Mills for example was sort of an unknown entity because the old mall sat there for so long. With the new concept it has become a real hub that will develop more influence as time moves on so I'm very pleased to be there.

How is the Don Mills store doing?

The store is doing really well. It's my first foray into retail so I certainly had a lot to absorb. We're almost at the end of our first six months, and it almost feels like a year and six months. It has gone incredibly well and I'm pleased where we are and I'm very excited about our offer. I think it makes a real difference out there. It's what I've envisioned for some time and it's fun to see it functioning every day.

Any plans for any other store locations?

I certainly hope so. Once I get this exactly where I want it then I'll certainly look to expand the brand for sure. I like the center of the city so I'll probably move directly downtown.

When not eating at your own places, what are some of the restaurants you frequent in the city?

I went to Yuzu last night. I like Sotto Sotto. I still like Rodney's Oyster House. I like to park at the bar and eat 24 oysters. I'm a pretty simple character. I don't usually go out for extravagant meals. I'll go to Terroni for pizza and keep it fairly simple. Otherwise I eat at my own restaurants or I eat room service at the Hazelton.

Where can you be found in your free time?

I'm usually out of the city. I have a cottage on Georgian Bay and I like to go there. In the winter we ski and in the summer we hang out and garden, go biking. We have a very fast pace from Monday to Friday so if I can leave and be up north for Sunday, I really have that as my preference. 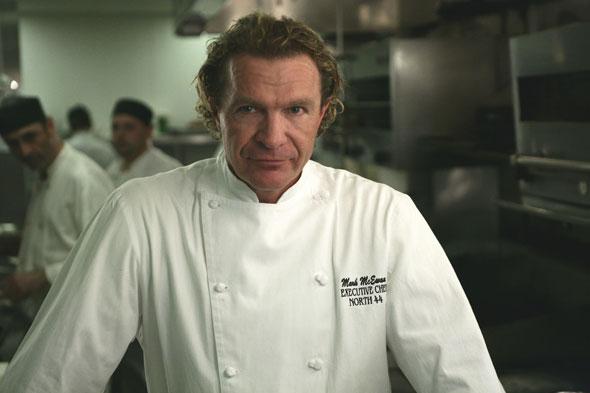 What was your take on Marc Thuet's Conviction restaurant? Is that concept something you'd ever try?

[Laughs] No, it's not my style, but it's certainly Marc's style. It fits him well and is very much a part of his character.

What's another passion of yours besides food?

I'm a bit of an exercise nut. I enjoy gardening, I enjoy road biking, I just love to be on the water.

You love biking, so how do you get around the city?

[Laughs] Not on a bike. Anybody who takes their life in their hands riding a bike in Toronto should have their head examined and then line up for a medal.

How does Toronto's cuisine shape up against other cities?

Over the course of my growing up in the city as a business person, there was a time that we looked elsewhere for inspiration and we still do, but when I go to New York I don't have as thick a notepad as I used to. I think Toronto is really doing well. It's right on the edge of being a very dynamic city.

Where do you see growth?

Well I'd love to see a casino in town. I'd like to see the city have some vitality in terms of bringing Americans up for weekends and tourists into the city. I'd like to see it somewhat energized. I think from a restaurant standpoint, we have wonderful restaurants and we have great clubs. If there were other things for people to do to draw them into town, I think it would be of great interest and something important for Toronto.

How important is the relationship between food and the city?

I think food sort of legitimizes a city. It gives it a sophisticated edge and Toronto certainly has a wealth of good restaurants. There are many, many places you can go for fine food in this town, whether it be on a casual level or a fine dining level. We hold our own to any other city, I believe.