Toronto Through the Eyes of Steve Munro

Steve Munro is a transit geek with an edge. His Santa Claus beard and twinkling eyes signal natural warmth, but the click of his badass leather motorcycle boots as we walked through his neighbourhood around Broadview and Danforth reminded me that this guy does more than just salivate over streetcars.

An intricate shaded tattoo of a grapevine starts on his right foot winding all the way up the side of his body and down his arm. On his back a tree grows up his spine and across his shoulders. He got the tattoos in his fifties because he loved the artist, Daemon Rowanchilde, and chose them partly because they're symbols of inherent strength without the nasty aggression.

A proud trainspotter, Munro's been riding the rocket for kicks since he was a kid. He parlayed that love into a life of transit activism, crafting a reputation at City Hall for his reasoned ideas and ability to recall any streetcar on the line. It also makes him Yoda to up-and-coming urban planners and transit fans in the city, penning columns for Spacing Magazine and getting phone calls from reporters and city planners hours after publishing his latest blog post.

In March, Munro retired from his IT management post at the Toronto District School Board. Now the 60-year-old is busy cleaning out some of the transit ephemera crowding his apartment and spending even more time indulging his other big passion - theatre, film and concerts.

When you think of Toronto what three words come to mind?

The city was a lot smaller than it is now. Because I was a streetcar fan, one of my weekend treats with my Dad was to go out for a ride somewhere on the streetcar system. So I got to learn about the city by riding the streetcar lines. The Yonge subway opened in '54, and I was only five-and-a-half then, but the Bloor Subway opened in '66 so there were large parts of the city that still had streetcar service.

Was your Dad a big streetcar/train guy?

Not really. But that was what I was interested in, so that's what we did.

My Dad was big into trains, and that was like the essence of our family vacations. We always had to go train museums and things like that. He had four girls who weren't interested in machines or trains of any kind, and now he has a grandson who loves Thomas the Tank Engine and can't get enough of machines. I'm wondering... do you think that this is a boy thing?

I've met women who are machinery nerds but there's a long history of rail fans being guys, and not necessarily the most socially well-equipped ones either.

You've met a lot of other so-called "transit geeks" in Toronto... is it mostly a male community?

Very much so. There are a few women but they come into transit through a side door, through interest in green stuff, and they say, "Hey! Transit's an important thing."

Spacing magazine has sort of created transit fandom among young creative types in the city who value the old TTC architecture, the font... I mean there's buttons, and there's the Every Station Club. What do you think of all this?

A friend of mine... one of his great aims in life was to have a picture of every single streetcar that the TTC owned. Well, he had many pictures of every TTC streetcar the TTC owned before he died... so that's a rail-fanish approach to transit.

Spacing is a mixture. You get people who are connected to the ephemera, to the type font, the look and feel of the transit system, but there's also an interest in how the transit system is a part of the city. And that's one of the things I like with the new crop of activists... they're not just looking at the streetcars or buses, they're seeing the transit system in the context of how it serves the city.

Rapid transit, without the world "light" preceding it, is any mode in which an integral part of the way it operates is that it has to have its own private right of way... so you can't have level crossings, you can't run in mixed traffic for short periods, and people can't walk across the tracks. That's rapid transit.

When you tack the word "light" on to it the distinction is that you do not require a dedicated infrastructure as a prerequisite. A very, very low-end example of that is the Spadina Streetcar... because it's a streetcar running in its own lane. It's faster than it would be if it were in mixed traffic, but just that. The next step up from that is to have a line with the stops further apart. You could also have a route that has some parts of the line grade separated. A good example is the Eglinton line that will be underground and basically a streetcar/subway from Weston to Eglinton, but from Weston out to the airport it will come back out on to the surface.

The strength of LRT is that you don't need the most heroic infrastructure for parts of the line that don't really require it. In terms of the Transit City Plan I think David Miller's on the right track because you could not possibly build as much coverage of the city with subway technology as you could with LRT. 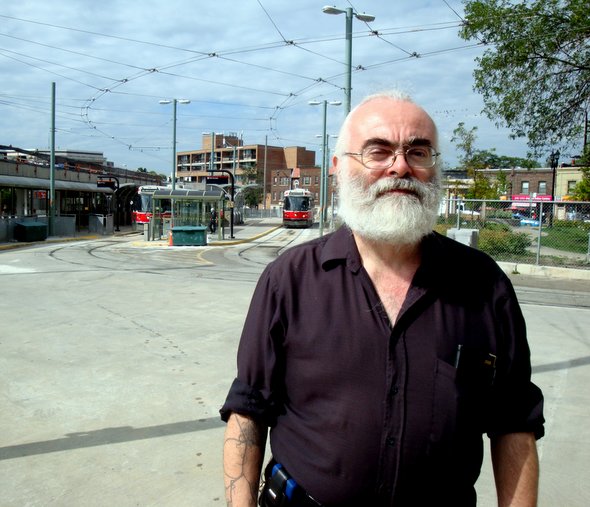 Do you have a favourite building in the city?

I have to pick one?

Well you can pick a couple.

Oh, that's really hard. You've got Commerce Court North, which was the height of deco style. I really like the tension between the old style office building and the original TD Tower. Of all the new buildings downtown I like the [TD Tower] the best because it is what it is.

There are lovely little streets where you'll come on a row of houses from the 1880s and '90s, like Wellesley Cottages.

Describe how you would spend an ideal Sunday afternoon in the city?

It depends on which hat I'm wearing. If I were wearing my city-person transit hat then I might go wandering around the city mainly on streetcars because I am a streetcar fan, but I don't' have a kind of religious objection to riding buses. It's not just to ride on the streetcars but to look at how the neighbourhoods I'm riding through have changed. I visit the St. Clair construction project quite regularly... it's a text book example of how not to do a major public works project... it's just a nightmare.

I go to a lot of movies, theatre, and concerts. One of the lovely things about retiring is the word "matinee" suddenly becomes part of your vocabulary.

There's stuff I do - I don't' want to get into the intimate details - but there are things I do with friends in the privacy of one's home and that can be a nice thing to do on a Sunday afternoon as well.

And then, of course, when all else fails, I blog.

What are your favourite restaurants in the city?

Bonjour Brioche. If I wanted a French restaurant I would go to Batifole over on Gerrard. There's a place called Easy on Queen and Roncesvalles, for great brunches.

What about the GTA, do you hang around outside the city at all?

Do you have a Metro Pass?

Yes... I can proudly say I have had a Metro Pass since they were first available in May of 1980.

I noticed you almost always wear all black, is that right?

A variety of reasons. A friend of mine who is a rather amply-proportioned lady of colour and who always wears black said, "Black is such a slimming colour." I don't have to worry about coordinating my wardrobe all the time. Although I have many different shades... careful observers will note that some of them are blacker than others, some of them are slate grey. And you may get denim, or you may get leather. Denim more commonly; leather is awfully hot.

That's another hat that I wear.