Opening Soon: Sushi Bar, Le Papillon on the Park, Nadege Patisserie, Mitzi's on College, Uzel, What Are You Looking At

With summer officially here, a number of new businesses are clamoring to open while the weather is good. At the corner of Queen and Broadview, Sushi Bar takes over in the space formerly occupied by SOMA Restaurant and Lounge. It seems that in a matter of months Riverside has gone sushi-mad as Sushi Bar joins the almost open Sushi District as the new competition in the 'hood challenging the much loved Sushi Marche. 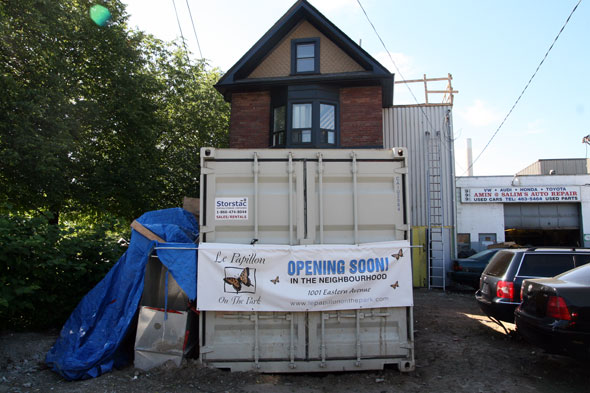 Further east at 1001 Eastern Avenue, Le Papillon in the Park is still under construction inside a restored brick house that would be easy to miss save for the massive Storstac container out front. The owners, formerly of Le Papillon near St. Lawrence Market have been updating their progress on a web site and promise the space will be opening in a few weeks and feature 3 wood burning fireplaces, beautiful french doors that look out onto the adjacent park, and a dining room and bar that will seat 120. 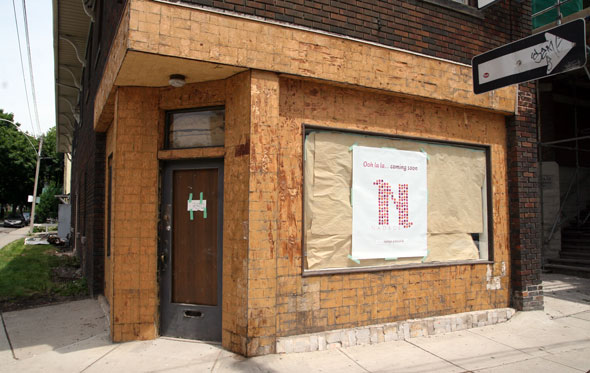 At the corner of Queen and Gore Vale, right across from Trinity Bellwoods Park, Nadege Patisserie is prepping to enter the local cafe and pastry fray, competing with popular nearby options Clafouti and the White Squirrel Coffee Shop. The new patisserie is still under construction and takes over from the photo studio that occupied this spot at 780 Queen St. West for as long as I can remember. 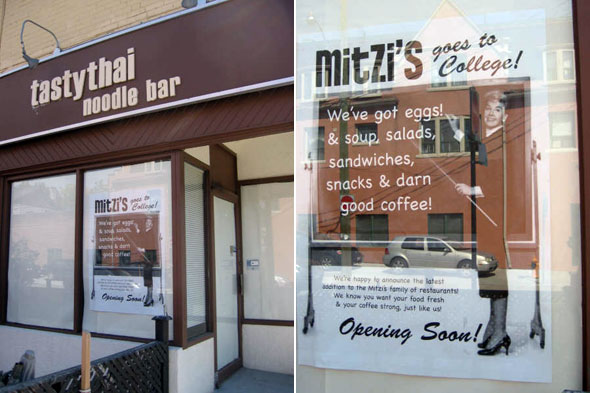 At College and Dovercourt, the owners behind Mitzi's Sister and Mitzi's Cafe are expanding their empire to three. The new brunch and lunch spot will feature a lot of the same menu items as the Sorauren spot including french toast, pesto club sandwich and signature oatmeal buttermilk pancakes. 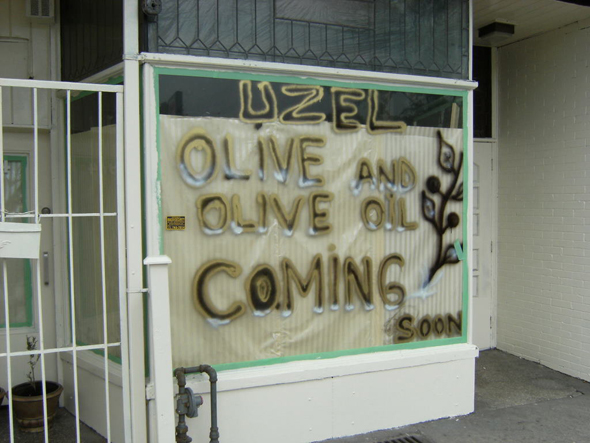 Trekking along Danforth, past the sexed-up storefronts of the mecca for all things Greek, you'll find the mecca for all things conservatively Middle Eastern as fashion, chicken briyani, shawarma and everything halal carve up Toronto starting around the 900 block. Tucked in across from the Madina Masjid Mosque and adjacent to The Only Cafe lies a "Coming Soon" sign I've had my eye on for a while. Uzel, at 974 Danforth Avenue.

Formerly the Chocolate Heaven Cafe, two freshly watered plants on the front stoop indicate that someone has been here recently despite what seems like eons since I've been waiting for this shop to open.

Peeking my head through the window and precariously balancing on a propane gas fixture, I spot a dusty interior complete with dozens of industrial-sized cans of organic olive oil, along with a store layout that screams, what else, olives. Massive Bagci and Siyah Zeytin drums indicate Turkish origins. Inside lay three and five gallon tins everywhere and nary a plastic olive drum to be found. Good news for martinis. 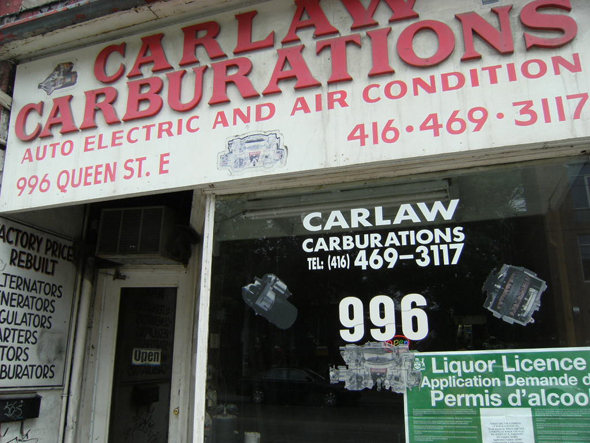 Carlaw Carburations appears frozen in time. Arriving just as the former owner was cleaning out the last of the tools and oily old carburetors, I couldn't help but think this was a sign of good things to come for Leslieville in terms of transformative business development pushing Carlaw and Queen away from its greasy past.

A true broom and dustpan moment to be had as even the previous owner's final cup of tea was left sitting on the counter behind a new Liquor Licence notice for 996 Queen Street East, soon to be known as the "What Are You Looking At Bar And Lounge". With nothing but the official green government notice to go by, my mind flashes to those ridiculous new General Motors commercials.

I wonder if the end of a manufacturing era in North America means anything in terms of old-timers like the shopkeeper inside making that final decision to sell based on all these dagnab newfangled economic ch-ch-ch-changes (with apologies to David Bowie). 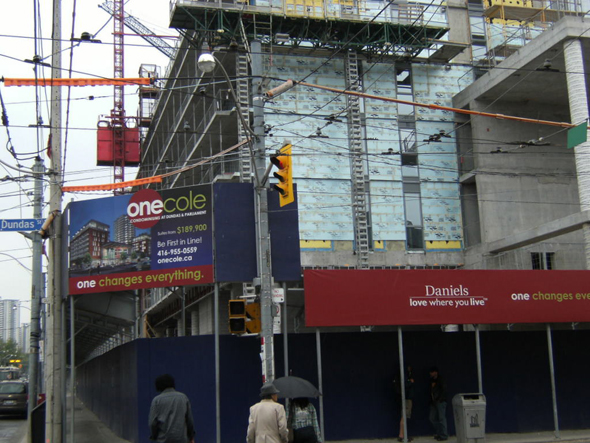 The Regent Park Sobeys seems close to fruition as the giant obnoxious chain-link wall hoarding covering One Cole at the southwestern corner of Regent Park appears two to three months away from unwrapping.

I already curse the intrusion of private security guards employed to walk the apartments and sidewalks at Sherbourne and Shuter Street so I wonder how all the new jackbooted thugs patrolling the former Toronto Community Housing Corporation property combined with the superbright, superpricey, non-unionized Sobeys will encourage a pleasant shopping experience for anyone who doesn't look "new and improved".

Methinks this experiment in massively multiplayer gentrification is going to go haywire as the lure of fresh concrete gets replaced with the lure (by some) of fresh crack cocaine.