The Annex is about to get in on the Neapolitan pizza craze. But it won't be courtesy of the folks behind Pizza e Pazzi, Queen Margherita Pizza or Pizzeria Libretto. Vacant since a bailiff's notice was posted on its front door last June, the space that used to house the anything-but-Irish James Joyce pub will soon be home to a Famoso Pizzeria, a franchise that established roots in Alberta back in 2006 but is now making a push east. Along with the Annex location, the company's website also promises a restaurant at Yorkdale Mall in Spring 2012. 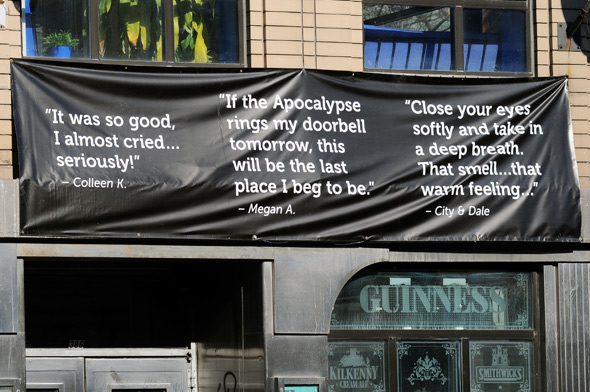 That should offer at least some indication as to what type of restaurant Famoso is for those who haven't heard of it. As one Edmonton Sun columnist put it, these franchises are kind of like an upscale, Neapolitan-style version of Boston Pizza, complete with corporate branding and sights on national domination. In other words, a perfect fit at Yorkdale — but what about the Annex? Not to be an asshole, but there are obviously just a few more options for Neapolitan pizza in downtown Toronto than there are in Jasper.

No doubt some will bemoan the further corporatization of the neighbourhood — though, in truth, that happened long ago and has ebbed and flowed for the last half decade or so — but one wonders if that attitude will carry much weight should the pizza prove as authentic as the company claims it is. Will the cookie-cutter interior and family-friendly atmosphere lead the Annex crowd to venture outward for its pizza fix (sorry, Hey Lucy)? Or is Famoso's just what the neighbourhood's been waiting for?

Thanks to reader Daniel Alter for the tip