This Toronto party goes around the world in one night

"The party is an interesting anthropological thing. To me it's a phenomenon. There's a lot of magic in it." That's Johnnie Greco talking about Turning Point, a monthly dance party that's been plugging music, beats and sounds from around the planet into Toronto for nearly 13 years.

"The music on the dance floor is the main thing," the almost 60-year-old promoter says. "And it's probably music you've never heard before."

What is Turning Point? You've most certainly seen the posters around town in shop windows and city surfaces. It's usually a gorgeous photo of someone in a rural, tropical setting, walking away with a bike or a stick, looking for something new. Greco has worked with the same designer for the posters and flyers since day one. They're also all over Facebook.

The event itself is a special one. It's a dance party promoted by Greco involving DJs and an army of vintage vinyl collectors scattered around the globe who fly in to play. Music from Central and South America, East and West Africa, Jamaica, Ghana, Haiti, Bali, the Caribbean islands and Trinidad all make up a genre Greco can only describe as the Turning Point sound. 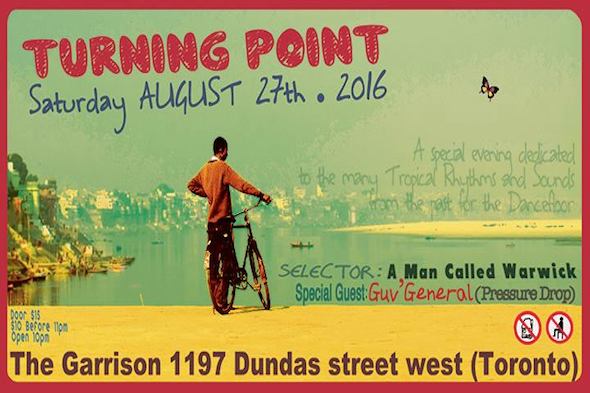 DJs come everywhere from Brampton to Paris to play their finds. It's definitely a crate digging group who plays, and rare world music sounds crowd who comes to dance.

"These guys have a fetish... they can't stop looking for hard to find stuff," Greco says proudly of regular DJs like Will Holland and Miles Claret. "One DJ is out of Paris (Superfly). He's got his own record store there. He once said to me 'Johnnie I can't believe this! People are dancing to this music!'"

Greco, who is full of stories and musical wisdom, has a hard time keeping a conversation going in one direction during our talk. A Colombian percussionist he knows walked by on the street as we spoke and everything halted so they could catch up and compliment each other.

He's charming, friendly and surrounds himself from people all over the world who have landed in Toronto and somehow play music and dance together.

"I struggle with describing [the party] because .... If you want an intellectual charge and to talk about the music we can do that, but we can also talk about a dance party with sounds you've never heard before on a powerful sound system," he says before saying goodbye to another lady friend leaving the room.

"We're known for our big sound system. We spent extra money to bring in a new sound system in the Garrison for the party. We call the shots... it's our system, nobody else touches it." 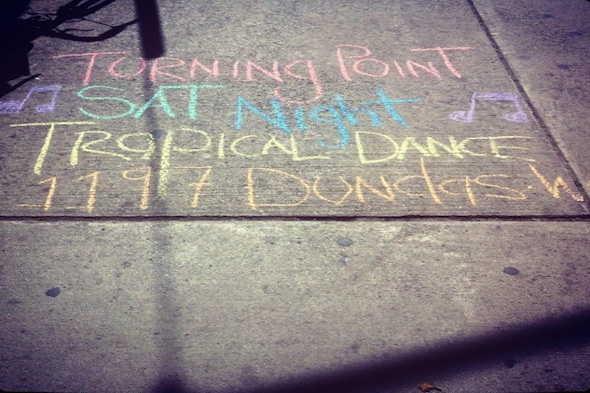 Once a room-filler at The Gladstone, Turning Point now happens at The Garrison, and yup, you read that last point correctly: they bring in their own massive sound system to overtake the room, fill every corner and create a safe, inclusive space where people can dance for hours.

"If you put in a lot of people and hair and clothing, you lose control of your sound in the room," he says only half jokingly. He's a sound junkie and that's how they attract the selectors and music-minded crowd.

Turning Point was already happening when Greco discovered it thanks to two musician friends visiting Toronto. One was from New York and the other from Finland. He went in at 10p.m. and left at 3a.m. and has been deeply involved ever since.

The event is the crown jewel of a collective of parties and groups in the city. Maracatu, Fedora Upside Down, Uma Nota, Lemon Bucket Orkestra, the Black Out Party and the annual Bike Rave are all family.

"You see Japanese, Korean, Portuguese, Brazilian, and Greek, all in one band, all learning Maracatu, a music from Northern Brazil," he says. "Playing drums and percussion together, creating. A lot of these people come to Turning Point. They're musicians and this is their dance party."

Greco ends our conversation with a story about him falling off a cliff last Christmas Eve in Grand River. "I was at a party with some Norwegians, we all had instruments, everyone was dancing in this big house on the river," he says.

"I was so drunk, I looked at the water and fell down this cliff. Luckily there were some mountain climbers nearby who rescued me and I was in the hospital for only a week."

That kind of sums up this man's incredible life and the party he's kept alive for the love of Toronto's diversity.

"Turning Point by necessity is where everyone goes to dance and relax," he says. "We get a lot of magical moments."