Following news of the inaugural WayHome Festival at the Burl's Creek Event Grounds, some of the new festival's neighbours, local residents of Oro-Medonte, started the website SaveOro and began circulating flyers in an attempt to preserve their rural lifestyle and agricultural land.

The SaveOro website states that a temporary by-law exists allowing for the expansion of Burl's Creek Grounds to accommodate large scale events. Section 7.30.1 states under temporary events "a rock music or heavy metal show is not a permitted special event." SaveOro members intend to stop the bylaw, thus preventing WayHome and others (like Boots and Hearts) from holding such events.

The SaveOro group has expressed concerns over the additional noise, pollution, and overall traffic on roads. One resident apparently posted his/her issues in a post on Reddit Toronto. The actual number of residents supporting the dramatically titled SaveOro initiative is not known. Residents and festival goers should know the Burl's Creek Event Grounds venue are privately owned. Republic Live and Burl's Creek Event Grounds remain separately entities, which may have caused confusion among some people.The owner of the grounds is a stakeholder in Republic Live.

In 2013, the Grove Music Festival, presented by AEGLive/Goldenvoice and Arts & Crafts records, was moved from Butler's Barracks at Niagara-on-the-Lake to the Toronto Fort York Common. Some lineup changes happened as a result, possibly due to the touring commitments of participating bands.

While no official explanation of the festival relocation was given, Elliott Lefko, Goldenvoice VP, made the announcement during a public meeting to discuss local residents' concerns over the festival.

WayHome is a product of Republic Live and styled after the Bonnaroo Festival. Before being named WayHome, and before the lineup announcement including Kendrick Lamar, Sam Smith, Alvvays, and St. Vincent, the festival was already highly anticipated.

Republic Live is working with various brand partners to create "a powerful, unforgettable, and eye opening experience using music and art as a catalyst." Some confusion has arisen as online sources list numbers as high as 70,000 people and 45,000 campers. Those numbers reflect venue capacity, not actual festival numbers. The WayHome festival will include camping or parking as part of its, and all people should understand that the allocation of tickets that will be on-sale for WayHome Music and Arts will ensure that every ticket holder will have access to camping or parking. In addition to music, there will be art installations, a "late-night forest," film screenings, a farmer's market, and international and local cuisine.

I spoke with Laura Kennedy, Director of PR at Republic Live, regarding the WayHome Festival and Oro-Medonte.

Laura Kennedy (Republic Live): We have been working with the township and appropriate agencies as part of the planning process in relation to traffic plans, noise levels, etc. and will continue to do so throughout this process.

It's really important to us to be good neighbours and create a forum where we can address any concerns the community might have. Just prior to announcing our move to Burl's Creek Event Grounds we began reaching out to residents in Oro-Medonte to open the dialogue and we hosted an initial information meeting in November along with representatives from Burl's Creek Event Grounds.

We have another meeting scheduled in mid March for the community and plan to host a pre-festival meeting to review all the final plans, as well as a debrief after the festival to get neighbours feedback on their experiences. We can be reached directly at community@republiclive.com.

In regards to the SaveOro group, Burl's Creek Event Grounds have reached out directly to them with the intention of attending their meetings to articulate their plans and dispel some of the circulating rumours, but at this time they have not received a response. 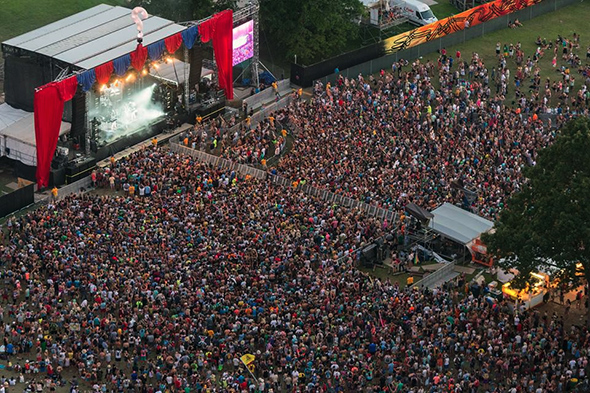 What positives will the festival bring to the region?

Both Republic Live and Burl's Creek Event Grounds want to ensure that there are positive impacts for the region. The projected economic impact, based on the TREIM model, sees Boots and Hearts generating upwards of $20 million and WayHome a minimum of $15 million per year for the region.

The venue is currently exploring educational initiatives with local colleges, developing careers and providing experience to future employment pools. Another aspect for the region is working with local service groups being brought into vending roles, this will allow them to generate funds that are directly injected back into the community as a whole.

It's very important for us as a company to support the community that we are in. Through our partnership with MusiCounts, one local school will be selected as a recipient of a BandAid grant as we earmark funds annually for this initiative. We also have funds allocated for community-based charities, and we will be supporting several non-profits that provide valuable services to the region annually.

Our track record in Clarington clearly shows that we believe in supporting the community as we have donated just over $60,000 in cash and in-kind donations of tickets over the past 3 years there and we certainly intend to support our new home to the same extent.

For such a large outdoor festival, has Republic Live planned any eco-friendly initiatives?

We'll be working with the venue and some key partners to implement a recycling program and engaging with community groups to divert waste from landfills. 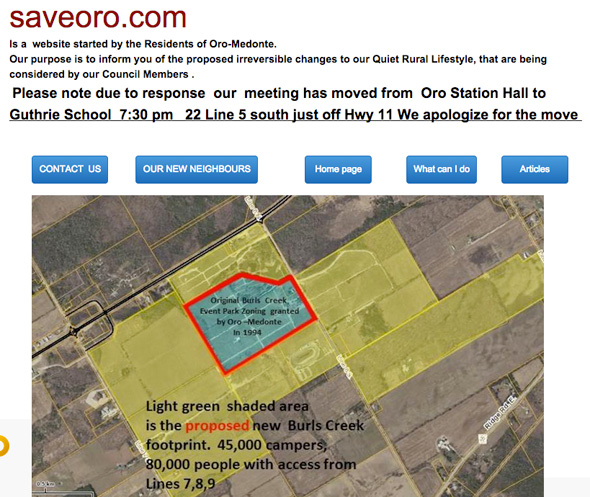 I also spoke briefly with Al Sinclair of SaveOro about tonight's meeting, which he believes will draw a significant number of local residents concerned most, it seems, about the lack of information they received about Republic Live's plans.

Ahead of the February 19 public meeting, have SaveOro spoken with members of government about residential concerns?

Al Sinclair (SaveOro): We have been very vocal with the local politicians to date several of them have been non responsive to our inquiries. Our Mayor has removed himself from any comments due to a conflict of interest.

Do you have an estimate on how many people (including municipal politicians) will be attending the public meeting on February 19?

One never knows, but we have moved to the Guthrie Public School 22 5th line south Oro-Medonte as our response has been good.

Are local residents also planning to attend the mid-March meeting set up by festival organizers to gain local feedback?

I would hope so. They have not been very forth coming with site plans, etc. - at this time as a community, we are very uninformed as to what their plans are.

It was a great PR vehicle for them to try and lull the local people into a sense of false security. It was an information night full of ambiguous plans and motives. No mention was made of other concerts or events at that time.

WayHome takes place July 24-26. A public meeting to discuss the issues of SaveOro scheduled for February 19 at 7pm at the Oro Station Hall has since been moved to Guthrie Public School at 7:30pm on February 19th.

This post originally stated attendance in the range of 70,000 with 45,000 campers. Those numbers reflect venue capacity, not WayHome ticket sales and parking and camping guarantees. Burl's Creek Grounds ownership was also reported in error. It has been corrected.