The history of the Silver Dollar Room in Toronto

The Silver Dollar Room was a place you could trace back to Toronto's early days of rock'n'roll and rhythm & blues. While a new version of it is coming back as part of an apartment development, it was closed back in 2017 after one final epic show.

Back in the 1800s, the first buildings erected at its former site on Spadina were a few small cottages that were part of a market garden owned by Robert Milligan.

The cottages were demolished in 1882 to make way for a three floor YMCA. In 1900, John J. Powell opened the Waverley Hotel (the second "e" would be dropped from the sign in the 80s for unexplained reasons), and for the next 50 years it would be run by his family.

Over the years the hotel was expanded a few times, but it wasn't until 1958 that the Silver Dollar was constructed as a lounge for the hotel, which was no longer operated by the Powell family by that point.

Opening on January 1, 1958, the Silver Dollar was also known as the Buck, and originally featured Tommy Danton and the Echoes as the house band. 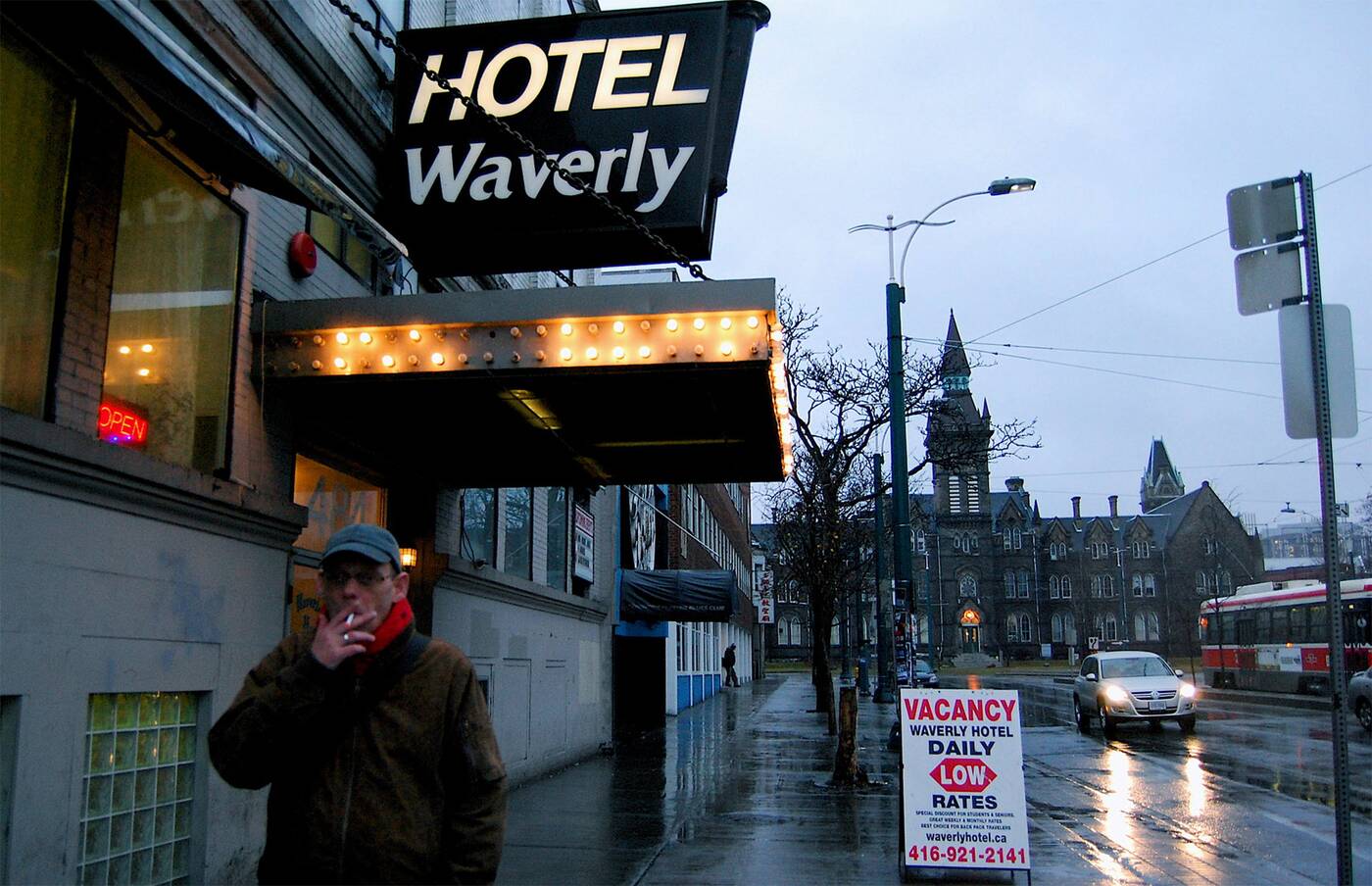 The hotel Waverly in 2010. Photo by Peter Grevstad.

By the mid-sixties, the hotel and bar had become much seedier than the upscale establishment it had started life as.

Martin Luther King Jr.'s killer James Earl Ray is believed to have stayed at the hotel and frequented the bar while on the run from the law, although he later claimed he'd never heard of the place.

Other reports of violence and crime associated with the place litter the newspaper reports of the time, and the Silver Dollar began operating as a strip club.

However, live musicians still provided the tunes, and it was a key incubator for the city's emerging jazz and blues musicians. Sax players like Jim Heineman, Bobby Brough, and Glenn McDonald would often socialise and jam there, and performing musicians were given special discounts on rooms.

By the 70s, the cheap rents and downtown location attracted artists and writers, including the "People's Poet" Milton Acorn.

Acorn lived at the hotel from 1970 until 1977, and even kept a writing room there until 1981. He is said to have frequently changed rooms while I lived there, as he was paranoid that the RCMP were surveilling him. 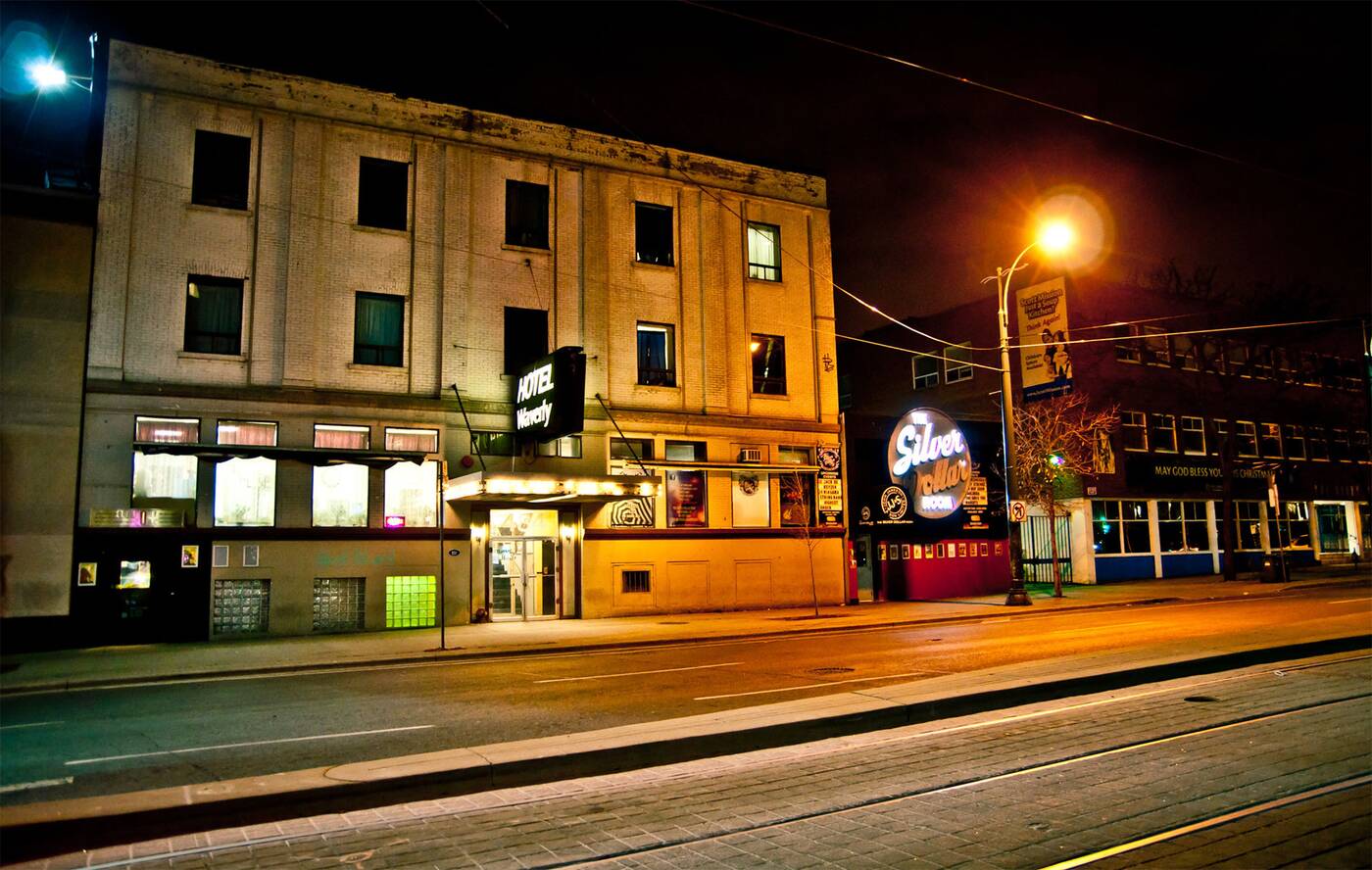 The hotel Waverly and Silver Dollar Room in 2012. Photo by Reneos.

The rest of the 70s and 80s saw the hotel and bar continue to struggle through rough times. Authorities raided the place and laid 233 charges in 1978 for selling liquor to intoxicated patrons, and another bust in 1987 led to 16 people arrested for prostitution-related offences.

The opening paragraph of Elmore Leonard's 1989 novel Killshot immortalized the seedy allure of the bar, which was also featured in the movie version:

"Try to come along Spadina Avenue, see that goddam Silver Dollar sign, hundreds of light bulbs in your face, and not be drawn in there."

That iconic sign was briefly covered up in 1992, when new operators changed the name to Jonny Vegas, but that didn't last long.

The interior murals were redone in 1994, which is also around the point when Downchild Blues Band bassist Gary Kendall took over-booking. 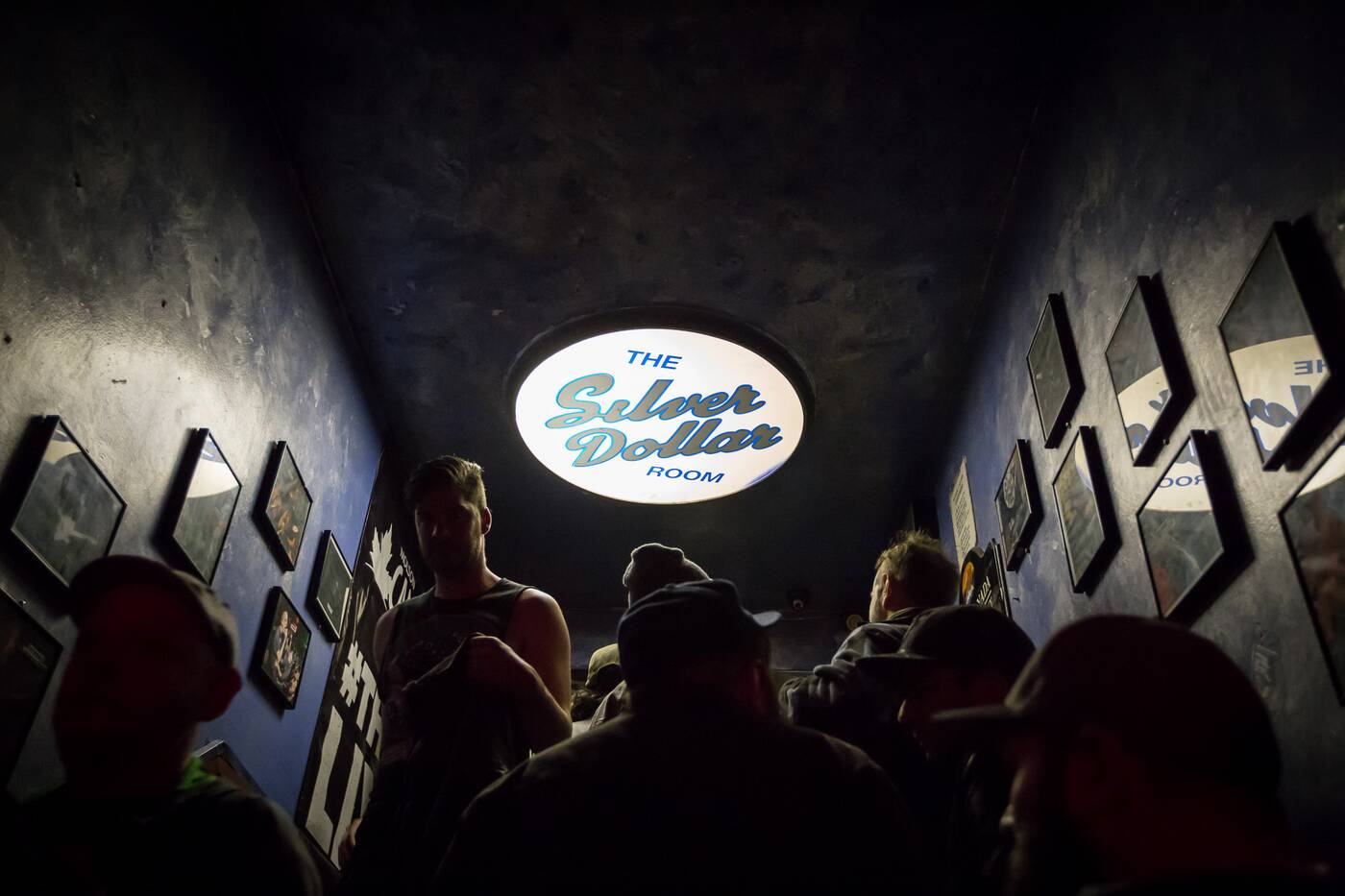 Inside the Silver Dollar Room. Photo by Jesse Milns.

Kendall's talent buying helped the club maintain and solidify its status as a key blues venue in the city, and he continued in that role until parting ways with the club in 2010.

While it was best known for blues, over the years the Silver Dollar also began hosting rock, bluegrass and even punk shows. Long-running indie showcase institution Elvis Monday took up residence there for a while, and garage rock bands like the Deadly Snakes played there regularly.

The basement of the hotel was turned into an after hours dance club, which was initially called Buzz, but later turned into the Comfort Zone.

The Zone's all-day Sunday parties are infamously debauched, and could feel like a time capsule of the original rave era. In some periods it also hosted live music, but was primarily known for DJ music and marathon parties.

The rock'n'roll side of the bar began to be even more of the focus in 2003, when legendarily colourful booker Dan Burke began throwing shows there, mixing his nights in with the bluegrass and blues shows throughout the week.

Over the years he became the primary booker, and turned the Silver Dollar into a key venue for the garage rock scene. For bigger events and festivals, the Comfort Zone was sometimes used as an auxiliary space, and there was a staircase connecting the two venues. 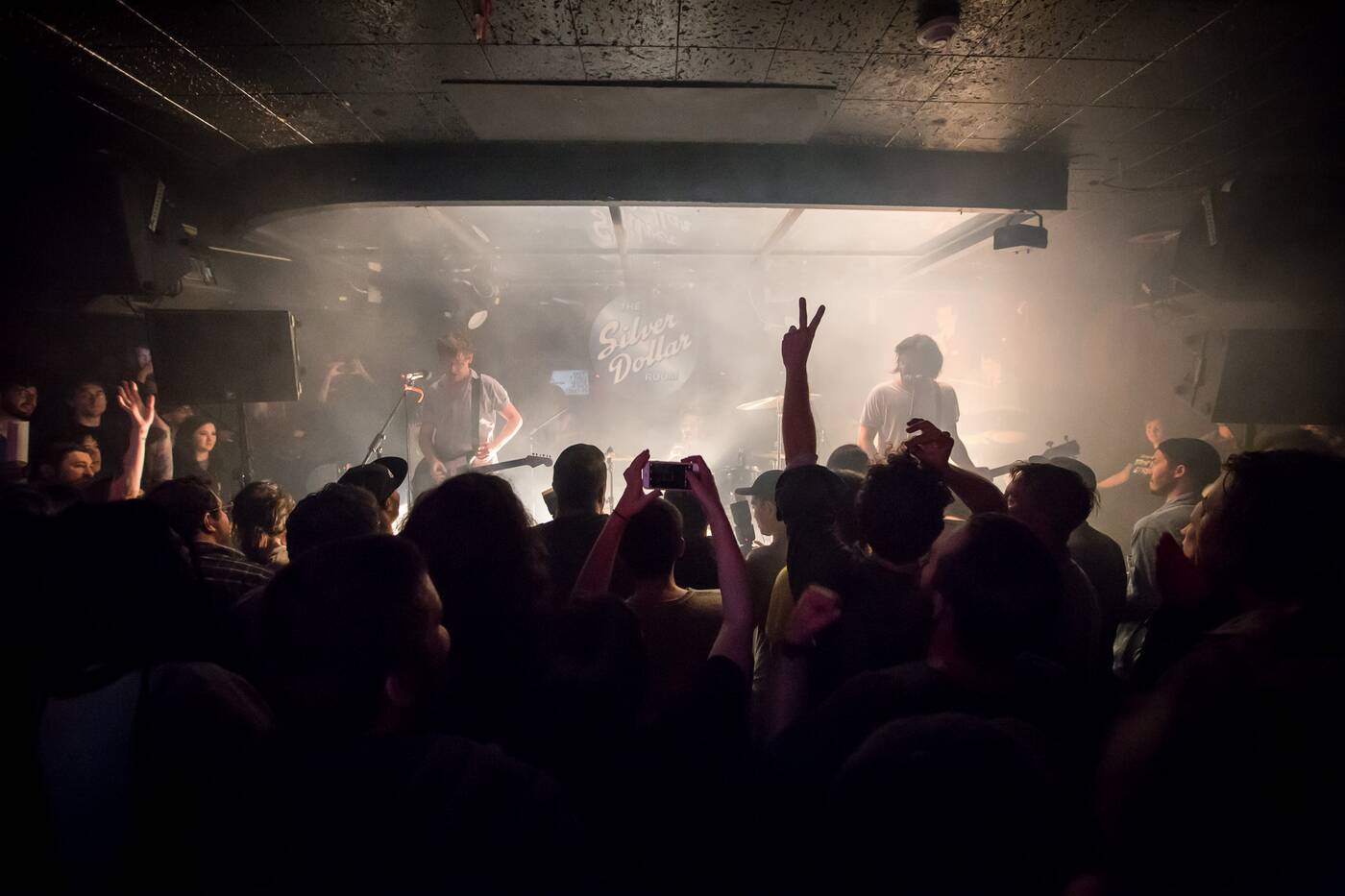 The final show at the Silver Dollar Room. Photo by Jesse Milns.

Over the years the Silver Dollar played host to an impressive range of talent, especially considering how small the room was.

Blues legends like Bobby Bland and Curley Bridges played there (the latter recording a live album), but it was where indie bands like Death From Above 1979 played many of their early shows.

International stars like Bob Dylan and Levon Helm graced its stage, as well as Canadian icons like the Barenaked Ladies and Blue Rodeo.

For at least 15 years the club was owned by David and Elsa Yarmus, and the building itself was owned by the Wynn Group since the mid-80s.

Originally the Wynn family hoped to demolish both the hotel and the bar to build a 20 floor privately run student housing complex, which predictably came up against neighbourhood opposition from residents concerned about the height, as well as being worried about the impact of a large concentration of low cost non-permanent housing. 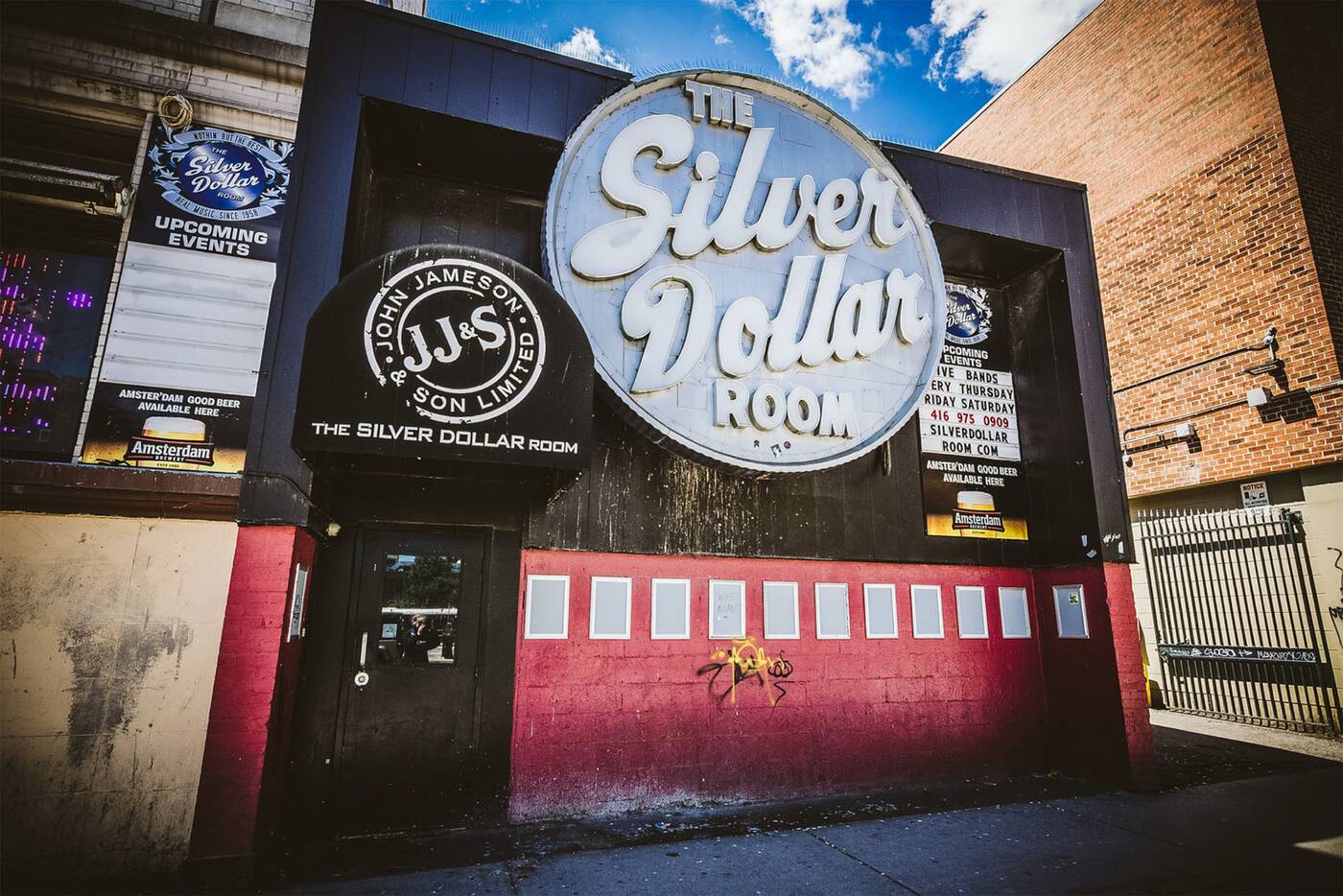 The Silver Dollar Room after it closed in 2017. Photo by Viv Lynch.

The property was then acquired by Fitrovia Real Estate who demolished it and are now building a 15-storey residential complex called The Waverly.

The new development will include an outdoor rooftop pool, yoga room and entertainment kitchen for cooking classes. The Silver Dollar is said to be returning there as a live music venue at some point in the future.