The no-longer-so-divey stage at Smiling Buddha will be rocked and rattled this Friday at Girls Just Wanna Have Punk. The all-ages show will feature ten women-powered punk bands, beginning early on (7pm) with Girls Rock Camp veterans Unfinished Business, and finishing off with in-your-face rock from Terminals.

Proceeds will benefit Sistering: A Woman's Place and Girls Rock Camp Toronto, and the price of admission gets you a copy of the freshly released This is Not a Test compilation, chock-full of female-driven punk from across the world.

This is Not a Test is being released through High Art For The Low Down (HA4TLD), a Toronto-based DIY punk label that has been throwing hardcore shows in Toronto's south end since 2005. The label has been a nurturing force in Toronto's hardcore scene, taking on projects like a punk comp CD benefiting the Books To Prisoners program in collaboration with Girls just Wanna Have Punk organizer Erika Supply. 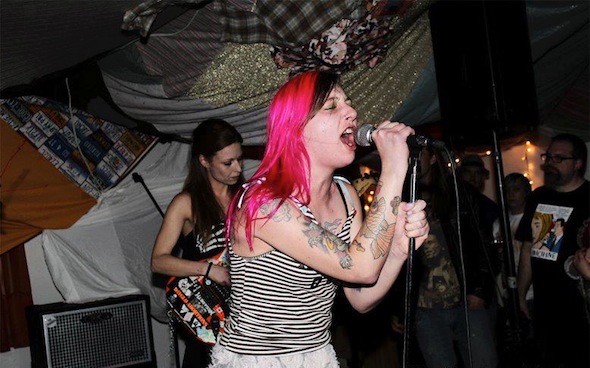 The comp features locals like U.T.I., Anti-Vibes, and City Death, plus bands from Czech Replublic, the United States, and across Canada. I scored a few tracks prior to the release, and spoke to Supply about why Friday's show is important.

Inspiration for Girls Just Wanna Have Punk stems from Supply's immersion in the punk community, where she's seen the presence of women overlooked for far too long.

"My hopes are that this show and compilation are a tangible way of showing that, although the punk scene can seem like a boys' club, women are kicking ass in the same scene. We all need to keep making space for one another by working together and showing support."

With these kind of initiatives, a change in Toronto's too often male-dominated music landscape is inevitable. The support system being built by organizations like Girls Rock Camp (July 14-20 and August 11-17, 2014 at the Tranzac) helps young women to carve out a confident place and identity for themselves as musicians. As time goes on these girls will no doubt continue to give back to the community they've grown to be part of.