The Pixies get a bad rap these days. Despite their seeming best efforts to fully dissolve any mystery that once surrounded the group, it was still tough to know what to expect from the band at Massey Hall Wednesday evening as they embarked on their second stop of a lengthy North American tour.

With the departure of Breeder/bass lady supreme Kim Deal and the rapid torch passing of the vacant position from Kim Shattuck (of the Muffs fame) to Paz Lechantin (also formerly of A Perfect Circle and Billy Corgan vanity project Zwan), it was difficult to glean just what the Pixies mean or represent in 2014 - a full decade since their initial reunion.

It seems as though no matter what the band has done in the last ten years, be it a career-encompassing greatest hits set (the first half-decade of their reunion), a complete run through of one of their seminal records (the Doolittle 20th anniversary tour a couple years back), or even, after long last, releasing new material (the creatively titled EP-1 and EP-2 over the past few months), they just can't seem to galvanize widespread goodwill around their current incarnation. Despite the added credibility of a tour in support of actual new Pixies compositions this time around, the en masse bathroom breaks and cell phone activity during the new tunes seemed to indicate a troubling apathy toward the new material. 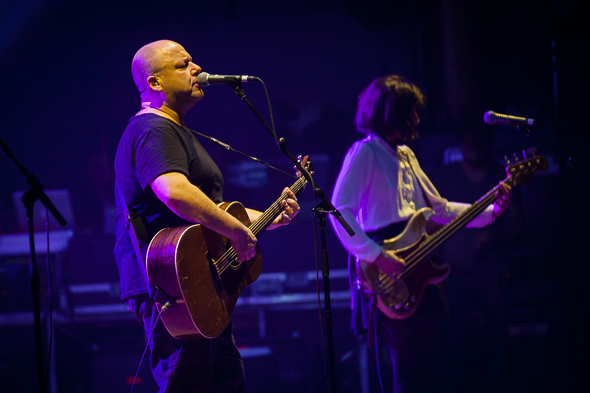 That's not to hoist an unnecessary amount of ideology onto the Pixies (tune in on their next Toronto go-round for our needlessly in-depth exposé on that). After all, this is just rock music we're talking about here. But most of the band's work from their original run does indeed hold a consecrated position in the depths of the rock pantheon, if there is such a thing. Even in the context of a soft-seat theatre some twenty-plus years since the writing of these songs there's still a very direct intensity built into the fabric of Frank Black's early Pixies compositions, and it was this timelessness that brought the near-capacity crowd to their feet for the duration of the set.

Of course, there were some trials to endure before rewards could be reaped. If there was to be any pandering on this evening, it was going to be on the band's terms - the show's opening salvo may as well have been a soundcheck for its lack of intensity. A relatively restrained, Black-sung version of "In Heaven" and a considerably slowed "Nimrod's Son" were crosscut with two new tracks, all of which failed to deliver the rush of adrenaline one would expect from the Pixies. For a band so frequently praised for their masterful control of dynamics, the show's opening was a failed liftoff. 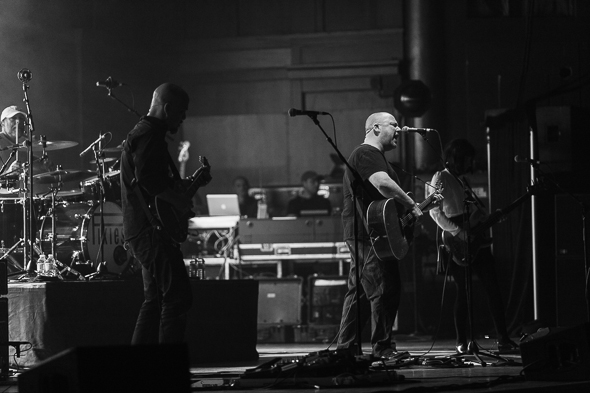 That said, the set wound up being rife with highlights, and it was tough to argue that any hardcore Pixies fan didn't get their money's worth from a 33 song, two hour show. The aforementioned shaky opening was saved by a straightforward but beautiful "Brick is Red," and a subsequent rendition of "Here Comes Your Man" had virtually everyone singing along. The sub-ZZ Top sludge of particularly bad new tune "Blue Eyed Hexe" couldn't even take the air out of their tires following a raucous "Vamos" (the song's middle-eighth mined for maximum jam potential by guitar wizard Joey Santiago), and closing with the raging misanthropy of "Something Against You" and "Tame" was a visceral thrill to say the least.

Was Kim Deal's absence felt? Absolutely. Drummer David Lovering recently stated that she was irreplaceable, and this is true as can be. Lenchantin, for her part, did a formidable job filling in on the strung low-end and sung high-end, delivering a note-perfect performance that netted her a standing ovation and flowers from some dedicated folks at the front. 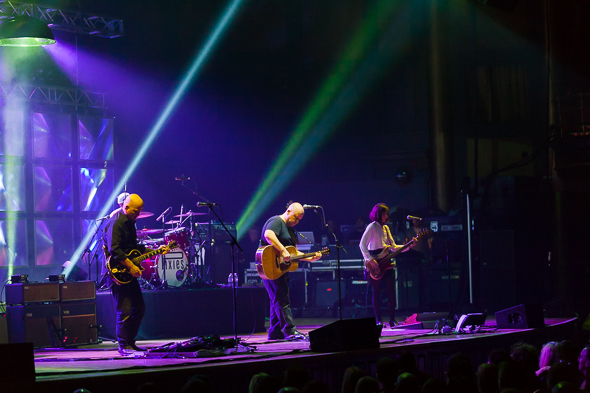 As well as Lenchantin did, though, it felt like a certain essential component of the band was missing in action, especially on Kim-centric songs like "Tony's Theme." The band's quirky charm, like much of the rest of the world, seems to be subject to the law of diminishing returns, and the surgical focus of the performance was only just able to compensate for a palpable lack of enthusiasm from the Pixies circa 2014.