Toronto music fans with smartphones are likely Toronto music fans with Instagram accounts. The grainy world of Instagram can be difficult to navigate — the excitement of following a favourite band can lead to a strained relationship only days later. How much, for instance, do you need to know about what the keyboardist has for brunch? Who is this random toddler you suddenly know every exploit of? Suddenly that song you love isn't so damn great after all. It just makes you crave waffles.

Often accounts like record stores, labels, venues, and bloggers are better failsafes for music fans, yet some artists take their talent for making compelling music and bring it with them to social media. Or they're just leading really enviable lives. Here's our list of 25 feeds that can improve your immersion in Toronto's music scene right now.

Sonic Boom
One of Toronto's most beloved record stores, Sonic Boom is keeping it pretty awesome on Instagram. Live pics and vids of artists performing instore such as Shad and Black Walls mingle with news of upcoming events and new stock.

Chromewaves
Blogger and photographer Frank Yang (aka Chromewaves) goes to every show. Every single show. Or well, he goes to a lot of shows. Follow the well traveled Yang for shots of artists like Basia Bulat and Patti Smith, plus some pretty cute cat pics. 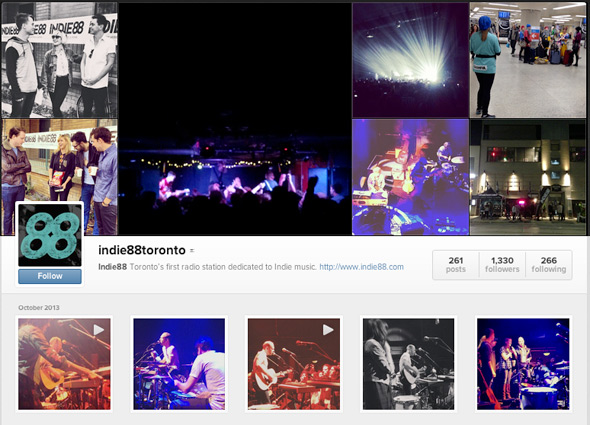 Indie88
Toronto's newest radio station is on the ball with Instagram, posting vids of live bands like The Rural Alberta Advantage along with shots of the station, DJs, visiting bands, and cupcakes.

Cameron Reed
Cameron Reed really does do marketing for Arts & Crafts records, but I'm not sure if he's actually a personal stylist for Avril Lavigne. Better known in some circles as producer Babe Rainbow, this feed is good fun and anti-aesthetic. Come on Reed, slap a filter on some cupcakes already.

Arts & Crafts
If you're into Moby, The Darcys, or Zeus, this is the Instagram feed for you right now. Tons of Moby pics here. Stay up to date on Toronto's biggest indie label by following Arts & Crafts & Moby.

The Darcys
Mostly pics of The Darcys. As one would expect. 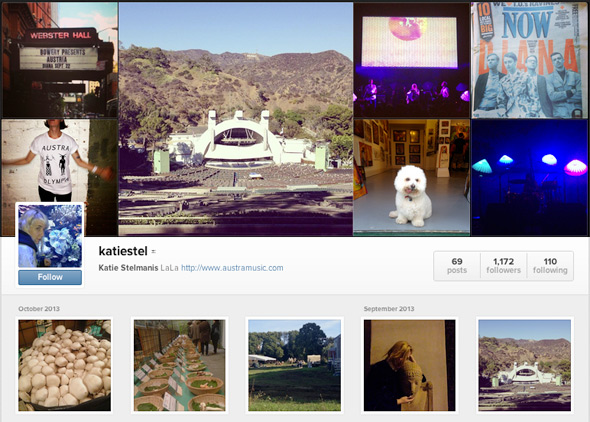 Katie Stelmanis (Austra)
It seems like Austra are on tour like, all the time. Stelmanis's playful feed documents a life of colorful, weird adventures and a behind the scenes look at the life of one of Toronto's best indie groups.

Ell V Gore
Track this gloomy local band's weirdo feed for photos that look like they were taken during or just prior to the apocalypse. Doom is better lo-fi.

Live Nation
Most of the biggest concerts in Toronto are put on by Live Nation promotions, so you're going to see shots (right from the pit, of course) of everything from Black Label Society to The Backstreet Boys to Bat for Lashes.

Mark Pesci
Local show promoter Mark Pesci (of Mark Pesci's Punk and Hardcore Shows) keeps things DIY in Toronto, and has a pretty laid back account. Shots of some of the coolest bands around are interspersed with shots of Hank, one of Toronto's coolest dogs. 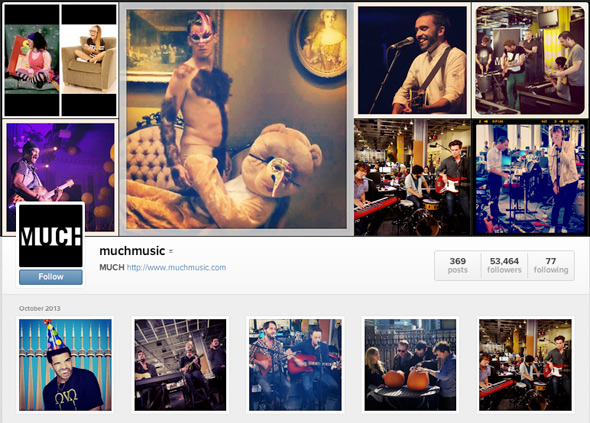 Much Music
Who are all of these people? I can identify about 10% of the so-called humans on this feed. If you want to have pop culture conversations with teenaged relatives over the holidays, follow Much Music now.

Pretty Pretty Records
You need more goth in your life and Pretty Pretty can help. Pics and vids of live bands from PPR's roster like Tarantula X, Kontravoid, and Prince Innocence are interspersed with promos for events, so you can be where the darkness is.

Adelaide Hall
One of Toronto's newest venues, Adelaide Hall has a bumping Instagram. Find up close and personal videos of artists like Maylee Todd and Suuns performing live, plus promos for upcoming shows so you don't miss out on anything fun. 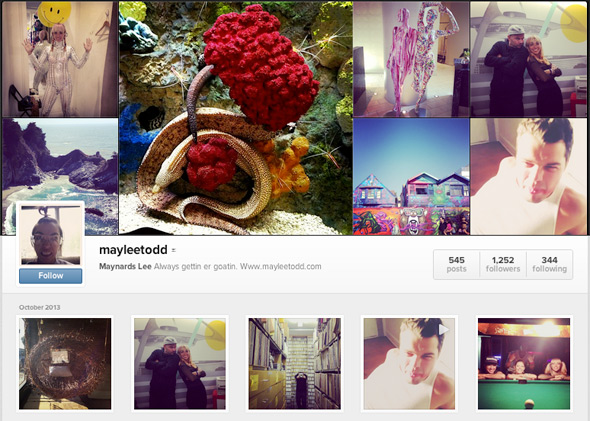 Maylee Todd
Surprise surprise, Maylee Todd's Instagram feed is a vibrant and refreshing as her music. Todd can't help but be awesome 24/7.

Six Shooter Records
This Toronto label's mantra is "Life Is Too Short To Listen To Shitty Music," and who wouldn't salute that. Follow indie label Six Shooter for shots of hip, folky bands playing around the city and some well composed, colourful randomness.

Southern Souls
Maybe Southern Souls summarizes their thing best: " I film bands and instagram nerdy photos." This busy blog is popping up all around western Canada and might just introduce you to some new favorite artists.

Paper Bag Records
Paper Bag's feed is a great look behind the scenes of a small record label. Live vids of artists like Austra and Cuff the Duke will turn up from time to time too. 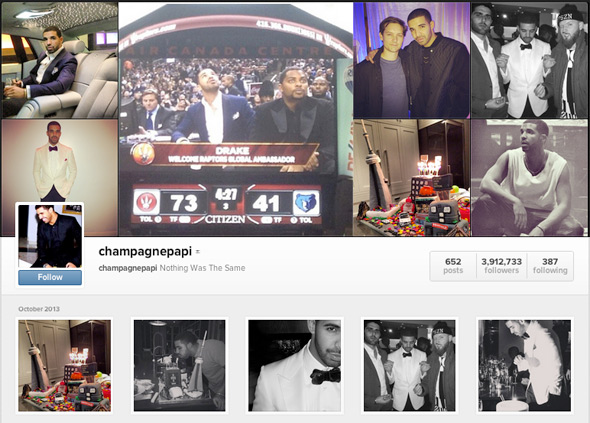 Drake
Drake's Instagram handle is pretty hilarious. What are we, thirteen? I'm guessing most of those 3,903,231 followers don't care, or aren't as amused by this as I am, and are hanging around for shots of Drake living the high life.

Soundscapes
While they don't post too often, the College Street record shop Soundscapes is worth a follow to find out about new releases and tickets in store.

ÏŸ†NÏŸ
Producer/electronic musician ÏŸ†NÏŸ has a keen eye for aesthetics and finding inverted crosses in unusual places, but the best reason to follow him is his dedication to documenting the spookier corners of Toronto's local music scene. Plus he loves squirrels, and you probably do too.

The Dakota Tavern
It looks like the Dakota just started using Instagram again this month. They've been active posting whiskey soaked live shots from the bar (voted best venue in Toronto by our readers earlier this month), so you'll have your more twangin' Instagram needs covered. 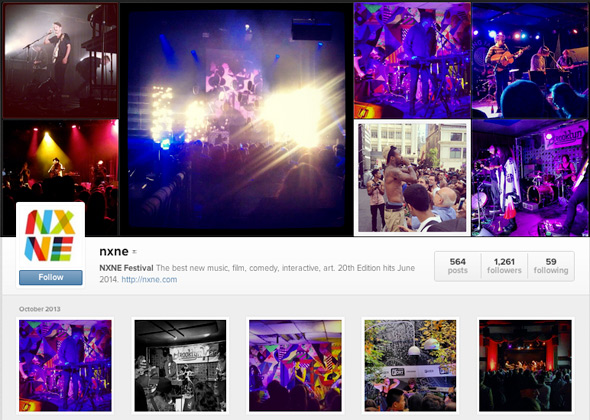 NXNE
For NXNE, the fun doesn't stop when their summer festival ends. They're out Instagramming live bands like Yamantaka // Sonic Titan and The Weeknd all year. As a bonus, you might catch some early bird news about the 2014 festival.

Blogs / Writers / Photographers / Industry Folk (including some of our music staff)

Whether you're Instagramming concerts in Toronto or have your DSLR in hand at every show, we want to know about. Tag your pics #livemusicTO on Instagram or upload them via this page.

We're sure to have missed a few smartphone wielding musicians and music lovers. Help complete the list in the comments.