How the Darcys went from catastrophe to indie stardom

While you won't find them listed anywhere on the Canadian Music Week schedule, there's a good chance that one of Toronto's most promising up-and-coming bands, The Darcys, will play a show tonight (hint: "The Great Hall" would be a good place to look for them). When the band takes the stage, they'll do so with a catalogue of excellent songs, the support of one of the country's most prestigious independent labels, and an upcoming album that promises to bring them even more attention.

So the Darcys find themselves in a good place, though it wasn't so long ago that the band's future was cloudy. Here's the story of how the Darcys went from near collapse to being the toast of Toronto's indie music scene in three short years.

In 2010, the Darcys then lead-singer Kirby Best left the band only days prior to their CMW showcase at the El Mocambo. I ask Jason Couse, the band's former backup singer and current lead-singer, how the group reacted to Best's departure: "Leading up to that show, people were telling us we were screwed. But we then realized that we cared about this project too much to let it go and, whether it was a good idea or not, we decided to keep pushing." That decision led to the four remaining members of band â Wes Marskell, David Hurlow, Michael Le Riche, and the aforementioned Couse â spending several frantic nights reworking their material to accommodate having one less musician in the group, and while tempers flared, they managed to meet their CMW obligation.

In hindsight, however, the difficult week leading up to their show at the El Mo proved to be a blessing in disguise. "I think that [Best leaving] turned out to be one of the best things that could have happened to us," Marskell explains. "We became really close friends because of it, and it also made us willing and able to work through things that came up later down the line that became publicized and were difficult for us internally." In a sense, the band had reached an inflection point, and the experience of picking up the pieces after Best's departure helped them with future crises. It's a good thing, too, because, as Marskell mentions, 2010 proved to be an especially difficult year for the band.

In the span of less than a year, the Darcys were held up at knife point, almost hit by a semi-truck, and had most of their gear stolen. That said, according to Marskell, what the band went through in those moments could not compare to the emotional turmoil everyone in the band felt trying to finish and release their self-titled record after several setbacks. "Obviously that stuff is hard on you as a person, because you feel like it's a matter of life and death, but as soon as you come out of them alive, you keep going. The harder parts of 2010 were going through a number of mixes with our record, and feeling like it wasn't good enough to put out." 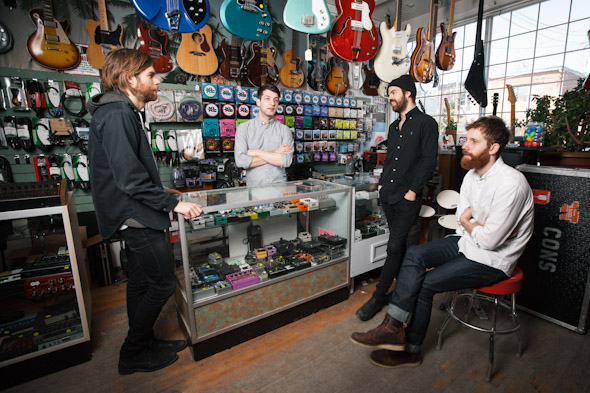 Thankfully, some of the doubt and darkness that plagued the band during the initial recording of their self-titled album was lifted when, at the behest of producer Murray Lightburn, Dave Schiffman signed onto the project to help mix the record. Schiffman, who has helped mix albums for bands like Weezer and Rage Against the Machine, is someone that both Couse and Marskell credit with helping to create a version of the album they finally felt was good enough to release. Around the same time, the band signed to venerated local label Arts and Crafts.

But even when the record was finally released and major music publications across Canada started to publish overwhelmingly positive reviews, Marskell says he still had his doubts as to whether the band had managed to release anything of value. Listening to him talk about it, though, you get a sense that self-doubt is what drives the band: "I always feel like what we're doing could be better, and that motivates us to work three times as hard to make things work."

It was during the trials of the recording process that the group decided to position the album as the first part of an ongoing trilogy. The second part of that trilogy, an imaginative interpretation of Steely Dan's seminal album Aja, was recored over the course of the summer and fall of 2010 at the band's Junction Triangle apartment. As an outsider looking in, it seems at least somewhat bizarre that the band decided to cover Steely Dan, but in Marskell's estimation, one of the more important reasons is that Darcys might not have survived without Aja. "We had finished our self-titled record, which was in limbo, and we needed something to keep us going. If we didn't have Aja, I don't think the band would have necessarily gone on had we just sat around; we would have probably become comfortable with our day jobs and moved on."

The challenge of deconstructing and recreating such a complex record also helped inform the song writing process of LP3, the as of yet unnamed follow-up to the self-titled album and Aja. "On a very basic level, it informed our new record with new sounds. I also think there's a weirdness and creativity in Aja that maybe wasn't there in our first album," explains the drummer. "Initially, Jason and I broke down every song on Aja to essentially a piano song. It allowed us to see what beautiful, intelligent songs they were at their core and how dressed up they became later. And what we wanted to do with this record was write songs that broke down to piano pieces as well." 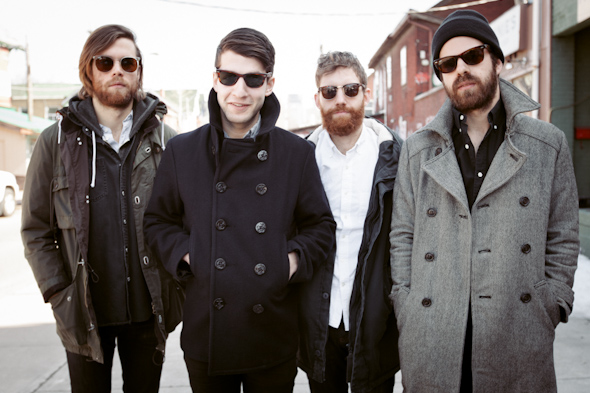 The band now finds itself in knee deep in process of working on LP3. The addition of producer Tom McFall (not to mention to return of Dave Schiffman) has, in the band's estimation, helped them write some of their best songs to date. Still, that hasn't meant that the recording of LP3 has been easy affair. It wouldn't be a Darcys recording session without some type of hardship.

In that respect, Couse describes a particularly revealing scene. During one of the band's more productive days at the studio, the group had managed to turn an initial idea into a complete song, but there was a problem. After repeat listens, both the band and producer realized that the song didn't sound right. What made that realization worse was that everyone only came to it at 6 in morning.

At that point, Couse says that he laid down on the studio's control room floor and told McFall that he was ready to give up. McFall wasn't having any of that, however, and he told the singer to "plug in his Rhodes." According to Couse, McFall even went so far as to prop up him up on his chair as he had one final go at the song's melody. And while much of the material the band recorded that day was scrapped, the melody that Couse played for McFall in that sleep-deprived haze would form the basis of "Horses Fell," one of several songs that's set to make up LP3.

Fans of the Darcys will have to wait until later this year to hear the entirety of LP3, but there's a good chance that the band will play "Horses Fell" at future shows, perhaps even at a show that may or may not be happening at 1am tonight. For their part, the band is excited for fans to hear what they've been working on for the past several months. If what they told me about their upcoming album is true, then the best is yet to come.

If you can't make it out tonight, you can also catch the Darcys at Arts & Crafts' Field Trip Festival this summer.