It was billed as a night celebrating Erykah Badu's debut, Baduism, an album which defined and perfected '90s neo-soul. Nobody was "supposed" to show up due to tickets running a hefty $70 and almost no advance notice. Either way, expectations couldn't have been further off.

Speaking volumes about the undeniable dedication of Ms. Badu's cult fanbase, over 1,500 concertgoers of all ages eagerly packed the Kool Haus. While Toronto visual artist Suritah Teresa Wignall exhibited her "Badu Effect" illustrations at the merch table, DJ A1 warmed the crowd up with a soulful set highlighted by Michael Jackson's "Rock With You." 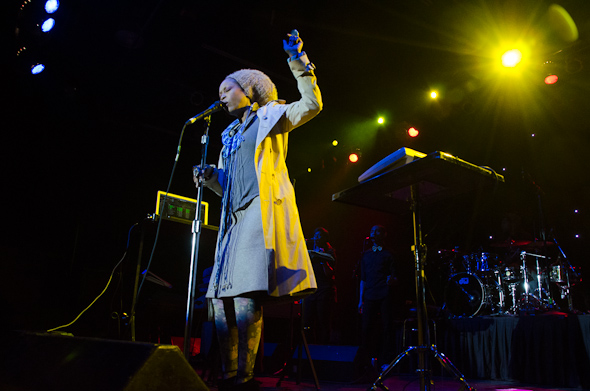 At about 9:30 pm, Erykah Badu came out to "Penitentiary Philosophy," backed by a four-piece band, a DJ, and three background singers. Interestingly enough, one of the vocalists was none other than Erykah's own sister, Nayrock, the one time star of a rather controversial Flaming Lips video; another the daughter of Millie Jackson. The opener concluded to Badu proclaiming herself a "warrior princess from the other sun," as the audience greeted her radiance with a warm ovation.

The band quickly responded with the Dilla-produced bongo groove of "Didn't Cha Know." Being one of the most popular offerings in Erykah Badu's catalogue, it came as no surprise that the packed house would instinctively fill in the words "back there some where" from the song's hook. Meanwhile, Badu removed her jacket to reveal a t-shirt with Harriet Tubman's face on its back. 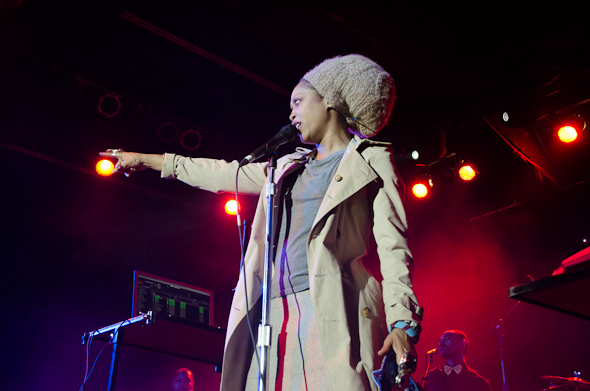 "My Life," "... & On," and "Cleva" would follow, by now making it clear that we would be treated to the entirety of Badu's Soulquarian-helmed sophomore effort, Mama's Gun, instead. The singer explained that the tour was alternating albums between shows, clearing up any confusion. She then rejuvenated herself with swigs of her legendary tea-potion concoction. "I gotta do this sh*t right," she said.

And do it right, she did. The pitch perfect "AD 2000," "Booty," and "Kiss Me On My Neck" marked the more minimal, up close and personal portion of the set. The latter track briefly featured a slowed down, or "screwed" effect, which was particularly astounding to hear re-created live by a full band, as opposed to the conventional method of decreasing the pitch on a turntable. This technique was popularized by the late DJ Screw, so it's no coincidence that the Dallas-born Badu would pay homage to a fellow Texas native. 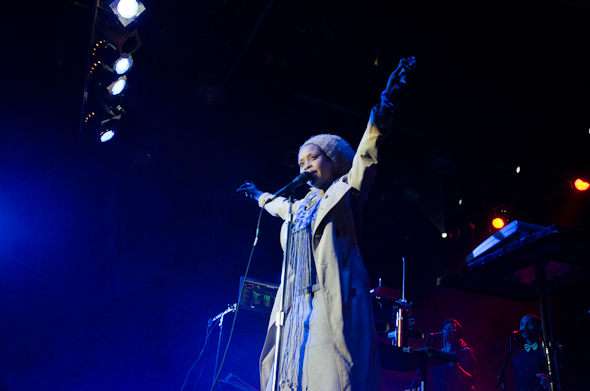 Out of all the songs performed throughout, it was a stripped down "Orange Moon" that tested Badu's voice more than any other. Needless to say, she delivered, time and time again. The Stephen Marley-featuring "In Love With You," came next. "Jah no dead," Badu firmly repeated.

Going into the album's final three songs, it was evident that the songstress was fully warmed up, in a zone, and ready to deliver her masterstroke.

"Bag Lady's" unmistakable Soul Mann guitar riff - also used in Dr. Dre's "Xxplosive" - immediately whipped the crowd into a frenzy despite being delivered via synths. The playful electronic composition, anchored by keyboardist R.C. Williams, validated itself as a fresh, more versatile take on the beloved studio version. Badu jokingly directed all the men - "all my tenors" - to collectively sing the song's chorus before moving on. 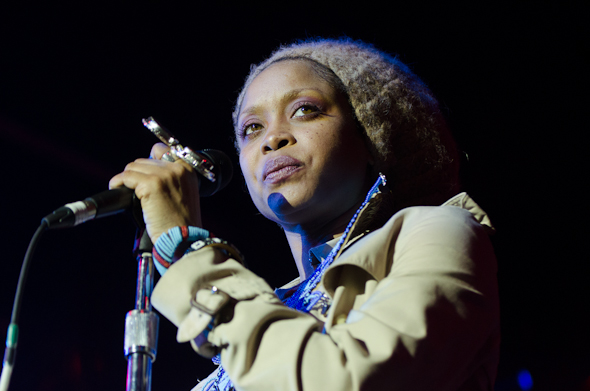 The string-heavy "Time's A Wastin" segued into Badu dancing under a solitary red light before proceeding to yet another showstopper in "Green Eyes." The conflicted, Billie Holiday-esque tune easily turned into the rawest, most overwhelming experience up to that point. "This is my therapy," Badu admitted.

Before wrapping up, DJ/producer Rashad "Ringo" Smith was introduced to the audience. Taking a well-deserved breather, Badu asked him to play some of his best beats. The crowd exploded upon hearing Busta Rhymes' "Woo Hah!! Got You All In Check" and Biggie's "One More Chance." By the time LL Cool J's "Doin' It" blared through the speakers, fans could be heard yelling "go Brooklyn!" in harmony with the beat's vocal sample. 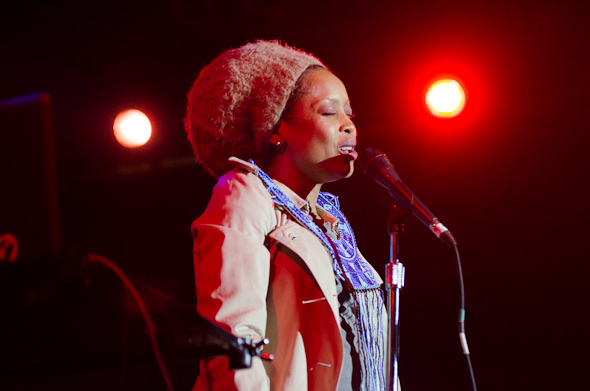 Keeping in line with the beat-oriented interlude, Badu began playing an 808 drum rhythm on her beat pad, while crediting Raphael Saadiq as a co-writer on her celebrated "Love Of My Life." At once, the 808 pattern cleverly kicked into the song's melody, as Badu ad-libbed "freak, freak y'all" to a more contemporary-sounding arrangement. As if that wasn't enough, two verses later, the instrumental evolved into Tribe's "Bonita Applebum," sitar sample and all.

"Toronto, why are y'all so f*cking cool?" Badu asked, with the vibe reaching a fever pitch. In what appeared to be a gesture of appreciation, she finally transitioned into Baduism's Andre 3000-starring "Other Side Of The Game." Remarkably, the rendition contained the funkiest groove of the night - a five-minute bridge, accented by "Still D.R.E."-like piano stabs, "I understand it!" shouts from the background vocalists, and high-pitched scatting from Badu herself. 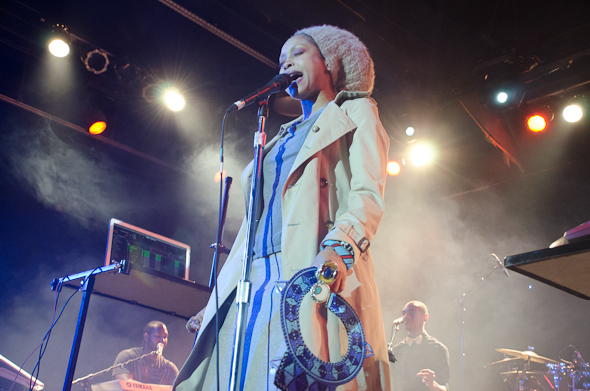 Worldwide Underground's "Bump It," and the Scott-Storch-circa-2004-stadium-status banger, "Danger," closed out the unforgettable performance.

For those lucky enough to have witnessed the New Amerykah Pt. 1 Tour at Massey Hall in 2008, this would have been a perfect companion piece. On the other hand, first-time Badu concertgoers might have preferred the anticipated bill and an encore. "Other Side Of The Game" certainly did feel like a bit of a tease, making listeners wonder just how incredible "Apple Tree," "Afro," or "Next Lifetime" would have sounded in person. Still, set list bias aside, it'd be downright absurd to complain about an essentially flawless showing from the queen of neo-soul.

The nine-member outfit truly did bring about a new appreciation of Mama's Gun, fleshing out more intricate orchestrations of the album's studio production. Most importantly, Twitter reactions going strong past 2:30 am proved to be nothing but positive. Praising her voice, beauty, and unparalleled presence, tweets filled with words like "crying," "inspiring," and "healing" came up more often than not. Emotions definitely ran high. 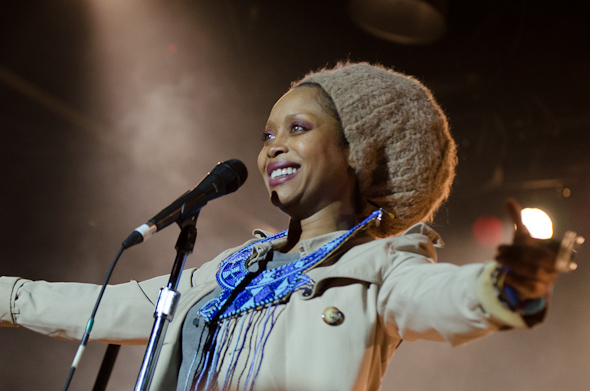 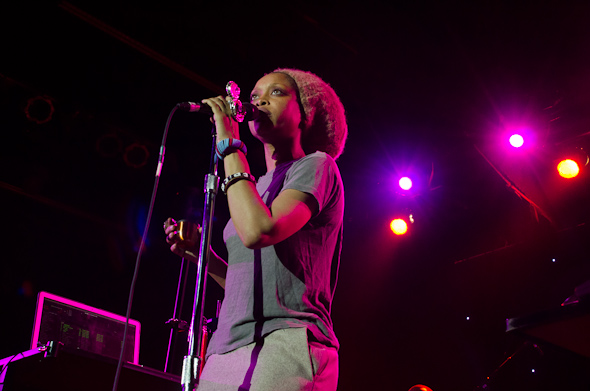 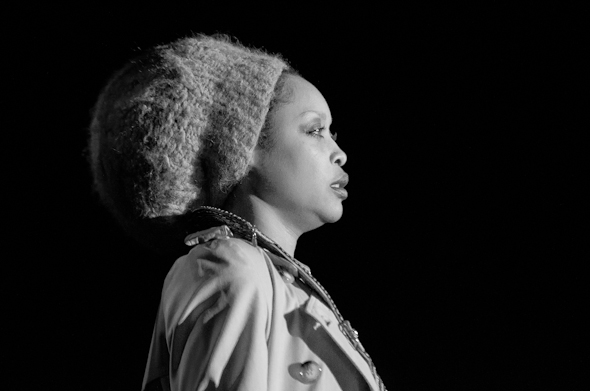