Well, Divine Fits are a pretty much an indie supergroup, if such a label makes sense. The band is composed of Spoon frontman Britt Daniel, former Wolf Parade/Handsome Furs singer-songwriter Dan Boeckner, and drummer Sam Brown of New Bomb Turks.

All formidable talents in their own right, expectations were naturally sky high upon the announcement of the group's existence a few months ago. Let's go right ahead and get the initial reservations of bloat and excess that go along with the supergroup tag out of the way immediately, though. Over the course of an all too brief set at a sweaty Lee's Palace on Wednesday night, the band proved themselves as far more than simply a vanity project of the three busy musicians, leaving a packed crowd clearly pining after a return engagement. 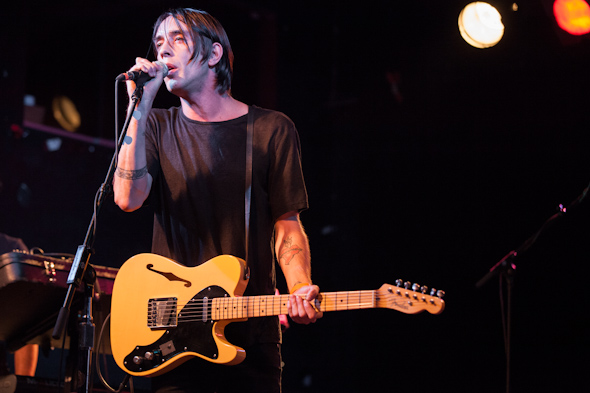 With their debut album, the cheekily-titled A Thing Called Divine Fits, having landed in stores just last week, a short jaunt of major markets was set to give the band its sea legs prior to more extensive touring later this fall. This isn't to suggest that the group were clunky; luckily, quite the opposite was the case as the band effortlessly sauntered through the entirety of the record and a handful of covers during what Boeckner claimed to be their 12th show.

Kicking things off with the jagged, Daniel-led "Flaggin a Ride," the band wasted no time in delivering a bracing sonic mission statement to those only familiar with the group by association. Britt Daniel's smooth, full voice serves as the perfect counterpoint to his minimalist, often groove-heavy songs, and here was no exception: cheers and fist pumps greeted the song's first chorus, on which Daniel showed off his impressive range and frenetic yelps. Over the course of the night the quartet's musical chops were matched effortlessly by their frontmen's wildly commanding delivery, the urgency of which might have well been to inform the crowd the venue was burning down, had the vocals been unintelligible. 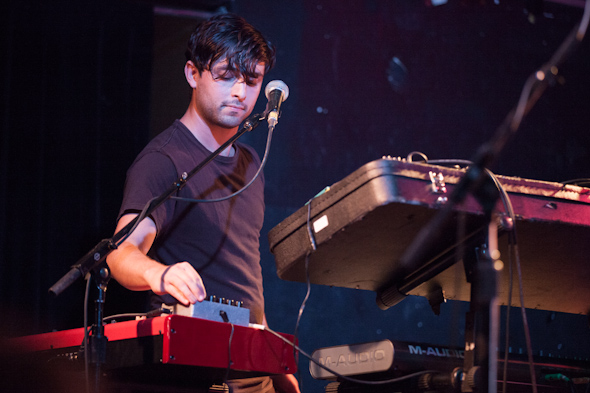 Joined by touring member Alex Fischel, who mostly stuck to a heavy rig of synths (although he did manage to sneak out to lay some guitar skronk on some of the set's more angular material), Divine Fits did a remarkable job of integrating their workmanlike songs with a relaxed confidence, even when the tunes were anything but mellow. The group's onstage chemistry, particularly between Daniel and Boeckner, gave off a convivial air only possible through the familiar comfort of friends, and the grateful thanks directed towards the audience between songs could just have easily been a show of mutual respect between the two songwriters.

The set also foregrounded the restlessness seemingly at the core of Divine Fits, with their propensity for constant reinvention already evident in the retooling of new material. "Civilian Stripes," on record a bare-bones almost-ballad featuring a Boeckner vocal paired only with guitar, was transformed into a rousing full band affair on Lee's stage.

Elsewhere, "For Your Heart" showed off the band's natural prowess and inclination to jam out lengthy instrumental sections, and "Neopolitans" had its haze of clammy production present in the studio version lifted to reveal a surprisingly anthemic, if a bit off-kilter, Pavement-esque pop tune. 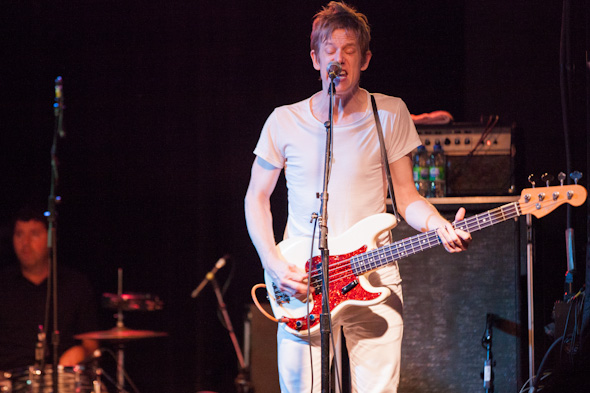 Filling out the set with cover choices as disparate as Wipers and Tom Petty deftly balanced the band's post-punk and classic-rock tendencies, while simultaneously leaving the door open for where Divine Fits could be headed next. Daniel and Boeckner have stated the band will remain their ongoing concern for some time, but when they're already this fully realized, it can only go up from here. 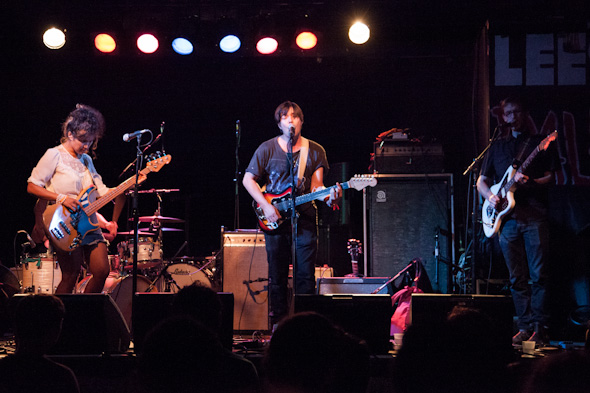 Toronto's own Hooded Fang snagged the coveted local opening slot, and for good reason. The four-piece are no strangers around these parts, and cranking out another set of sunny, hook-laden garage pop was hardly an incompatible choice to match the impossibly catchy work of the night's headliners. As has been the case with the band's live sets for the last year or so, Hooded Fang opted to eschew the twee-tinged indie-pop that marked their earliest releases and the bulk of Album, their first LP.

The surf-tinged, manic guitar pop contained on Album's follow-up, last year's Tosta Mista, anchored the night's set, punctuated with a few new songs that, while rarely deviating from the second record's established formula, held true to vocalists' Daniel Lee and April Aliermo's innate sense of melody. The set began on a bit of a shaky note thanks to a bottom-heavy mix and a stage presence that came off as a mixture of fatigued and bored, but just as they were beginning to find their way, the set was over. Despite coming off as slightly uninvolved, the performance was still potent enough to emphasize the band's keen melodic sense, and a reminder to look out for whatever left turn they may go for in the future. 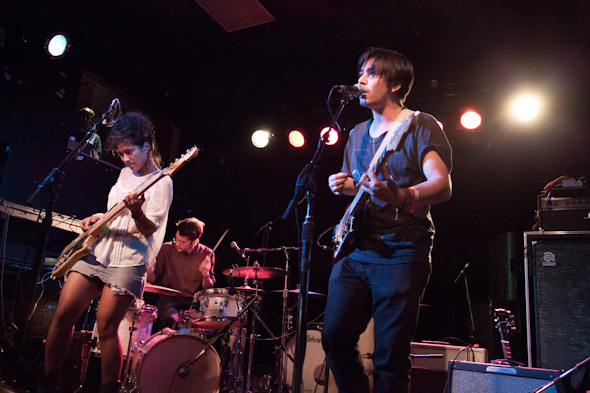