Coldplay really lit up the Air Canada Centre on Monday night. And likely Tuesday as well, if they followed suit in the second of back-to-back shows in Toronto.

Upon entry, attendees were given a Twitter-branded LED wristband that, when triggered, lit up the entire ACC like a sparkling, multicoloured Christmas tree. Perhaps it was a gimmicky stadium trick, which Coldplay didn't really need to do, but this was a big money show, after all. They commanded the audience from the get go with their well-penned songs and rousing choruses. 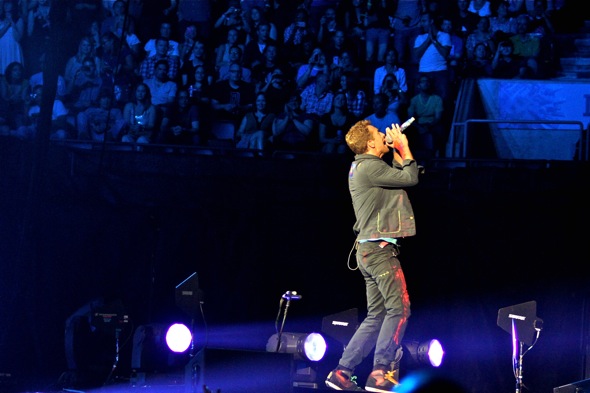 And then there's frontman Chris Martin, who pranced around the stage like a kid in a bouncy castle, enjoying every moment. He won the crowd early on, singing "Where do we go nobody knows? Play a concert tonight in Ontario," altering the lyrics from God Put a Smile Upon Your Face. 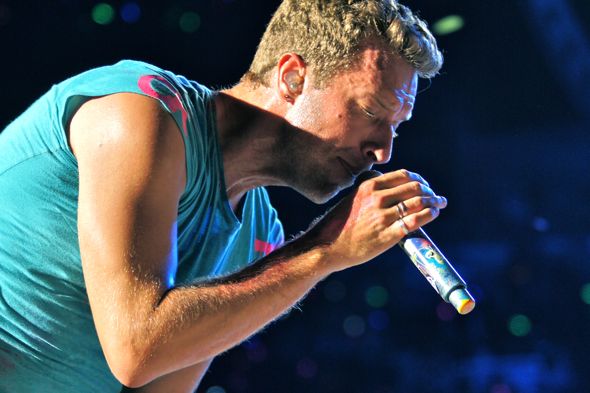 Martin also made good use of the catwalk that jutted out into the centre of the stadium, giving more fans a closer look. 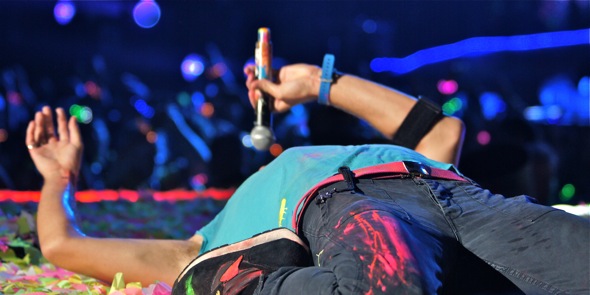 At one stage, the entire band took a spot at the edge of the catwalk and played a few songs from this spot. 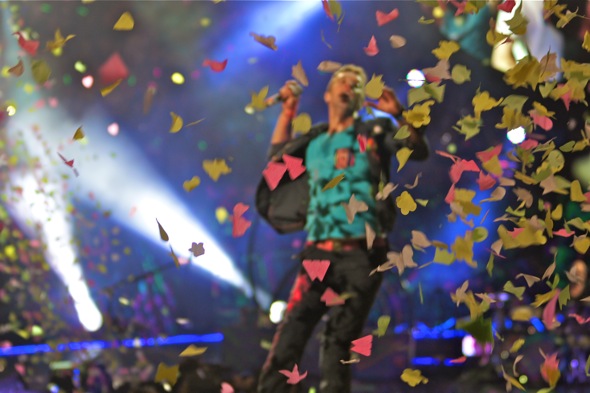 An amazing burst of energy hit the crowd at the start of In My Place, about the third song in, as confetti cannons shot bursts of colourful shapes that mimicked the Mylo Xyloto album that Coldplay are touring. 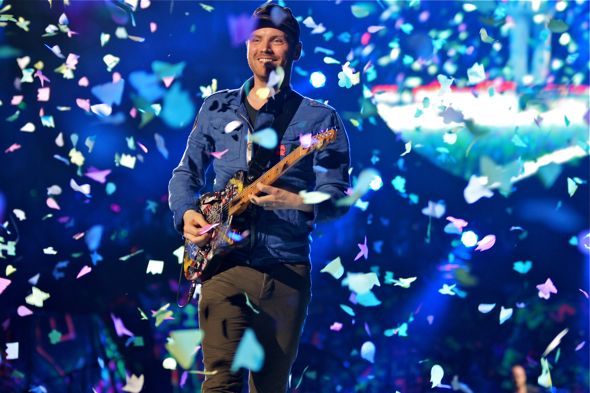 Most bands break out this sort of fanfare at the encore. But not Coldplay. They busted out of the gates running, with a handful of hits, including Yellow from their debut album Parachutes, which started out all quiet and introspective, but achieved massive singalong status in no time. 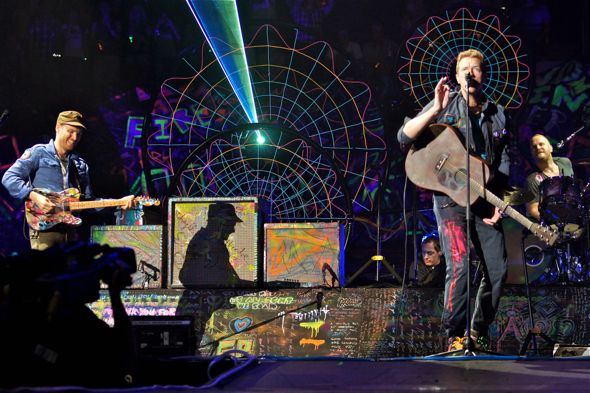 The stage lit up too, with fluorescent Spirograph-like shapes behind a grafitti-styled backdrop. 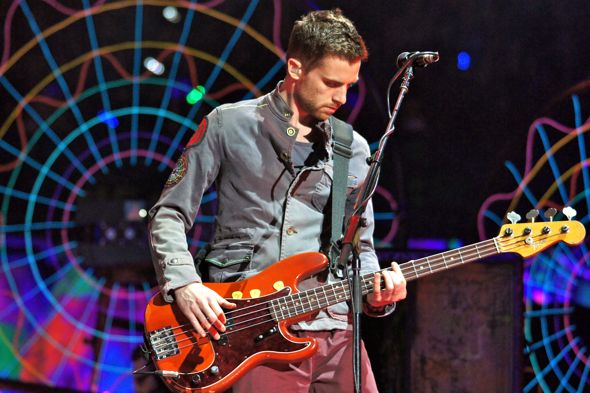 Bassist Guy Berryman and drummer Will Champion kept the rhythm section tight throughout the set. 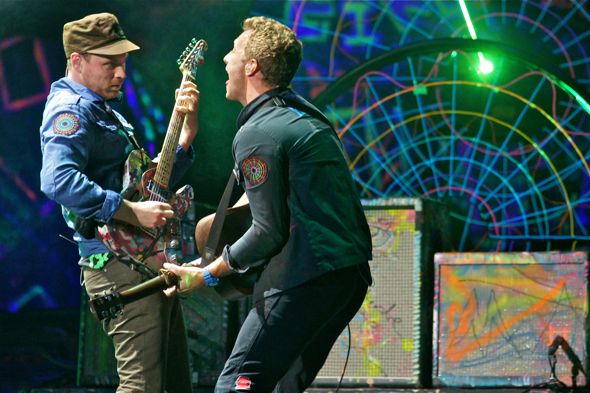 Guitarist Jonny Buckland occasionally rocked out with Martin and you could tell they were enjoying the show as much as the audience. After playing 16 songs, Coldplay disappeared from the stage, leaving the crowd alone with their light-up bracelets, cheering for more. 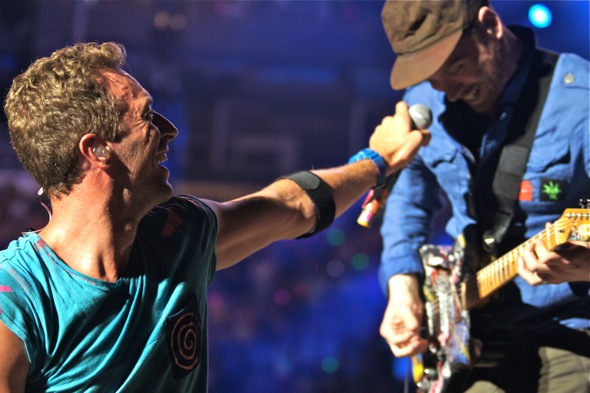 Martin quickly reappeared in the middle of the audience near the cheaper seats and thanked the crowd, saying "It doesn't feel like a Monday night, it feels like fucking Christmas, so thank you so much." The band joined him one by one to sing Us Against the World.

Martin then screws up the beginning of Speed of Sound and asks the crowd not to put it on YouTube. Oops. 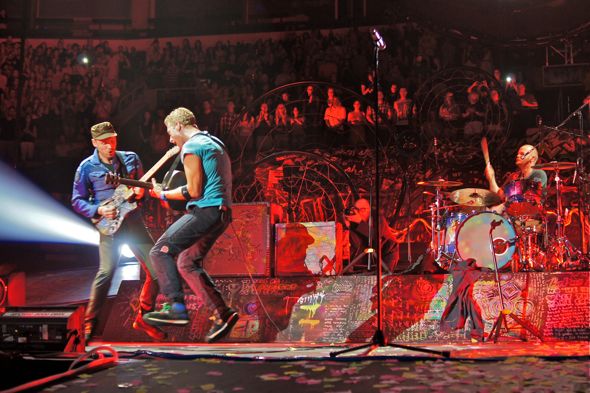 My favourite Coldplay song, Fix You followed, with the band back on stage. And I must say, it was awesome to witness in a stadium setting for the first time, with Martin jumping for joy on the catwalk and fans singing along en massse. Quite the magic moment. 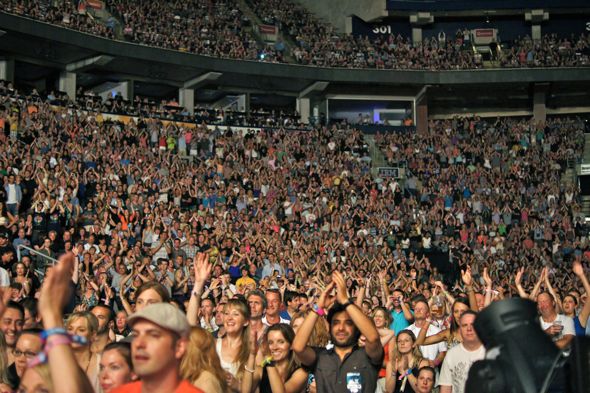 Coldplay ended the hour-and-45-minute show with Mylo Xyloto's first single, Every Teardrop is a Waterfall, with fans all waving their light-up wristbands in unison.