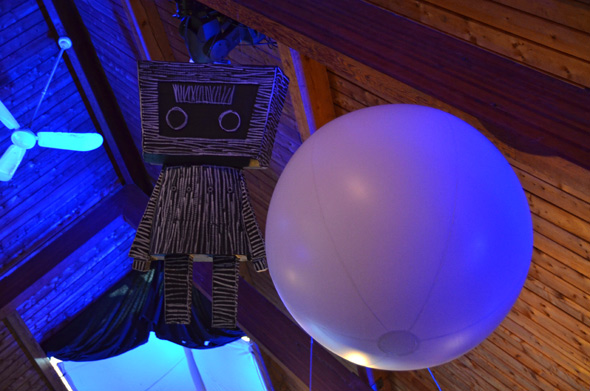 There weren't many clues as to how the set would unfold as the audience wandered into the venue beyond a couple of illustrations from the book projected on three screens hanging above an impressive array of equipment on stage. Everyone picked up a set of headphones as they came in the door and found a spot to sit or lay back on the floor while mellow instrumental music washed over the gathering crowd. I noticed far more children in the audience then I had expected, but was soon to learn why. 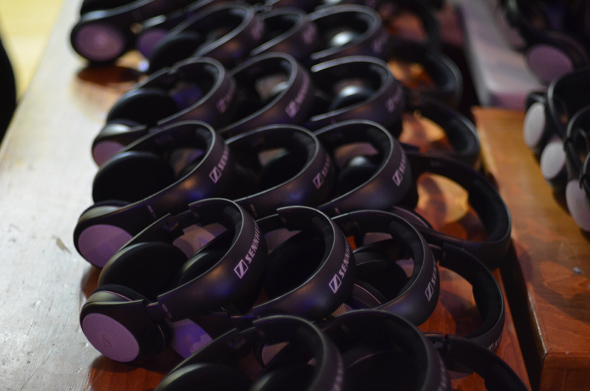 The show started off with an opening set by Terence Bernardo on guitar accompanied by Kid Koala making various contributions using one keyboard in the centre of the room. Koala produced Bernardo's forthcoming album Dirge, and they bantered back and forth during this three song warmup. "How ironic is it that we're "warming up" what's supposed to be a chill concert with songs from an album called "Dirge," Koala playfully wondered out loud.

After a brief intermission, it was time for the main event. At this point we donned our headphones as the rest of the concert was sent over local WiFi direct to our headsets, completely by-passing the acoustic experience and ambience of the room.

Koala told anecdotes about several pages of the Space Cadet book, cracking jokes and laughing maniacally throughout. As he noted, this was like the director's commentary version of the book, though perhaps a bit quirkier than what you get on your average DVD/BluRay. After making it most of the way through the book he launched into "Skanky Panky," followed by the Space Cadet theme song written for his daughter. 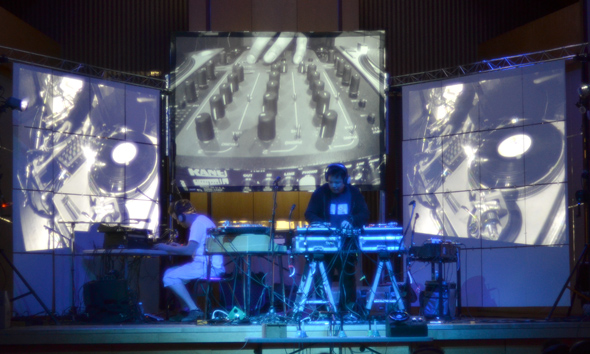 It was at this point that the audience was beckoned to participate. Two young volunteers were brought to the front of the stage and handed contraptions that turned out to be a thumb wrestling game somehow hooked up to a video feed. Judging by the crowd's response, this was a successful little experiment (and the kids got a free copy of the book for their battle prowess). 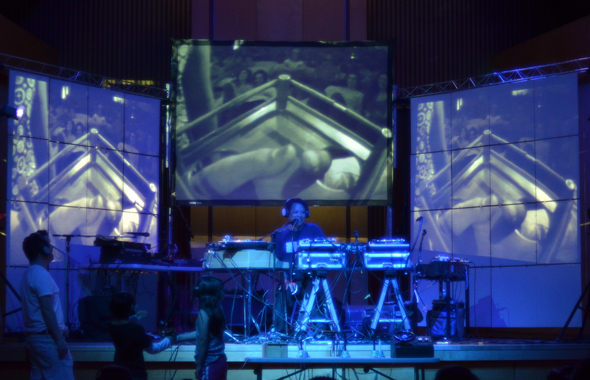 The rest of the evening consisted of some incredibly sensitive and subtle musical moments. Highlights included "Remembrance" from the Space Cadet soundtrack and an incredible version of "Moon River" dedicated to Koala's mother. Some of the interplay he achieved using two turntables and the same piece of music was reminiscent of Robert Fripp's or Adrian Belew's most complex guitar work. Similarly,if you closed your eyes during "Drunk Trumpet," you could easily imagine that the song was coming from some jazz master at the top of his game blowing riffs. Koala has a deep understanding of music and the genres he plays with — yet everything looks almost effortless and fun.

For every serious piece of music he played, he also cracked jokes pretty much non-stop and continued to invite the audience to participate throughout the course of the night. After climbing into a giant Koala suit, he had the crowd on its feet going through the motions for the "Yo Gabba Gabba" theme song, wiggling their fingers in the air and giggling away like a roomful of preschoolers. 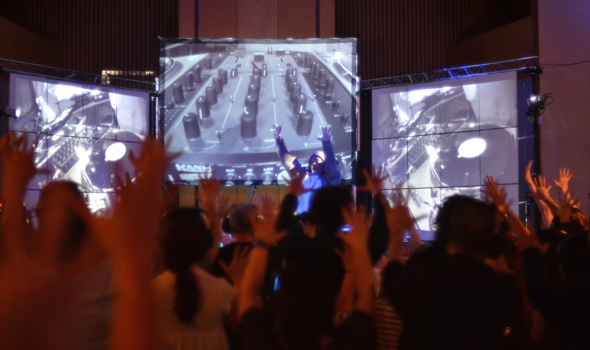 One tasty tidbit the DJ revealed is that work on the followup to 2000's Deltron 3030 is finally complete. Koala even played a bit for us...over his phone. 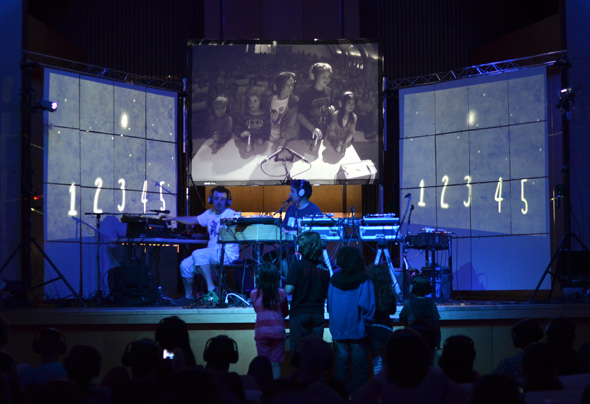 After more songs and audience interactions — including a bit during which kids rang numbered bells in time with the animation — it was time to make room for the second wave of audience members. We collectively removed our headphones and deposited them in a big box on the way out. You might think that having spent most of the last two hours wearing these things would have left us feeling somewhat removed from our fellow attendees, but there's no sense of isolation at all thanks to Koala's great charisma and warmth.