We Were Promised Jetpacks blast off at Lee's Palace

Fresh off of playing two sets at Coachella, We Were Promised Jetpacks brought their brooding, intense brand of rock n' roll to Lee's Palace on Friday night. It must've been a big switch to go from Coachella, with its huge, open stages and mobs of people, to the dark and cramped confines of Lee's Palace, but the audience was a rowdy one, and their noisy enthusiasm probably helped the band forget the difference in scale.

Seriously. This crowd was one of the loudest I've heard. Ever.

Opening with "It's Thunder And It's Lightning" from their 2009 debut These Four Walls, WWPJ were almost drowned out by members of the audience singing along. The band was playing loudly, too; that heavy drone of guitars and frantic drumming nearly blew my head off as I walked into the venue. 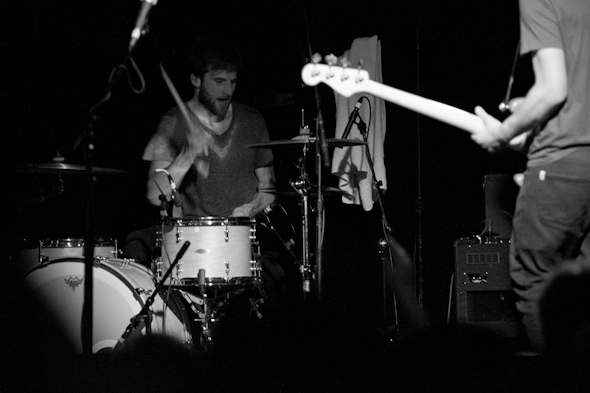 Actually, the audience was singing along so loud to that first one that it came as a bit of a shock when the band flipped to "Boy In The Backseat" next and the crowd kind of... stopped. Singer Adam Thompson delivered lines like "I'm keeping myself to myself / still gathering dust on that shelf" with exactly the gravitas one would expect, but the audience-participation portion that makes such lines anthemic just wasn't there.

Maybe it was because I was standing at the back, but every song WWPJ played from their newest release, 2011's In The Pit Of The Stomach, received a noticeably muted response wen compared with anything from their debut. I found this kind of surprising, as the new record is a focused, hard-hitting powerhouse of a release, the kind that whole careers are built around. 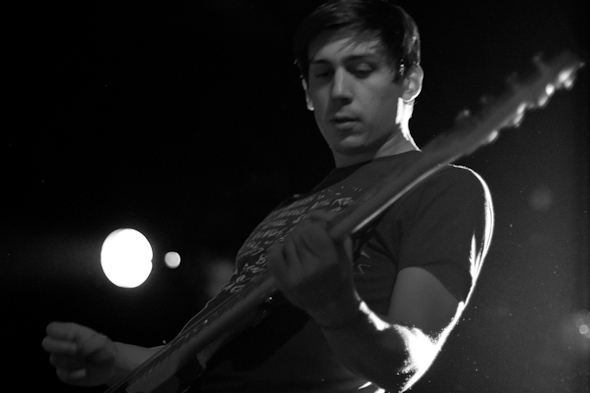 WWPJ got a massive amount of press and media attention for their first record, though, and the audience definitely knew all of those songs inside and out — during the chorus of"Quiet Little Voices" the band cut out and the crowd carried the song. Let me tell you, the phrase "I'll die for you" becomes positively huge when a few hundred people are yelling it repeatedly in close quarters. 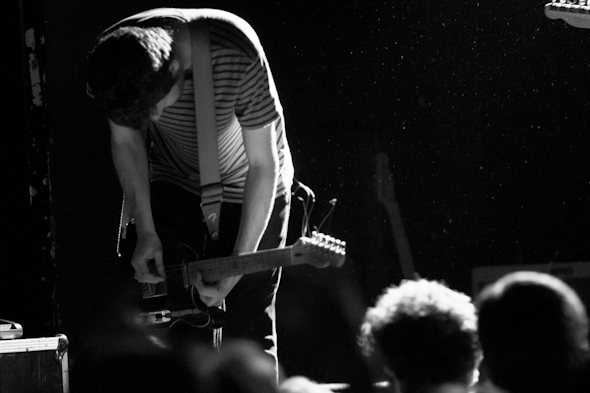 As he played, guitarist Michael Palmer hunched forward, his low-hanging Telecaster almost brushing the floor as he hammered it with his pick. Unsurprisingly, his instrument had to be retuned repeatedly.

Newer tracks like "Medicine" showed We Were Promised Jetpacks at their best — the band playing in lockstep timing, with an aggressive beat underneath one of the fastest hi-hats in the business and the vocal lines just waiting to be picked up by an eager crowd.

Even if they didn't know all the words well enough to sing along, the crowd was moved by the heavier tracks. You could tell because of all the devil horns and yelling. In contrast, when WWPJ tried to bring down the dynamics and play a version of "Pear Tree," the folks just weren't into the vibe. Thompson had to ask people to "shut the fuck up" before they could start.

"We'll guide you home before your curfew / And into your bed," Thompson sings on the studio version of "It's Thunder And It's Lightning." And while they didn't stick around for an encore — according to their Twitter account, it seems to be part of some sort of policy? — I would doubt that anyone got home early after starting the night here. And judging by the crowd at the merch table after they left the stage, though, there'll be plenty more people singing along the next time We Were Promised Jetpacks come to town. 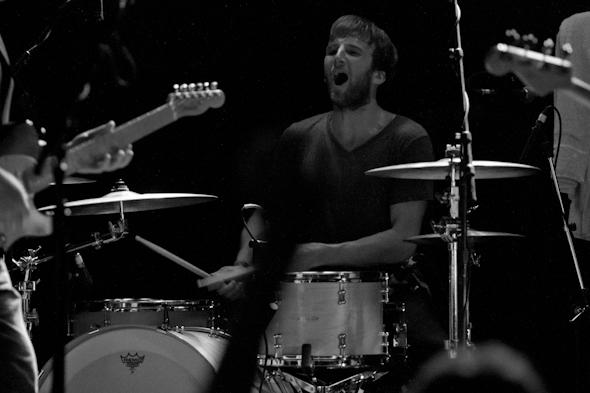 all photos by Bruce Emberley