Toronto's relative lack of mid-size venues is a discussion that pops up often, but what's more interesting is how some resourceful local event programmers are tackling the issue. What's one space that holds a few hundred concert-goers and has great acoustics?

Holding indie shows in churches isn't a new idea, but the twist this weekend at St. Stephen-in-the-Fields was the headliner, Bristol juke producer Addison Groove, wasn't slated until 1AM. This Anglican church near Kensington Market was playing the host to a bona-fide rave (though the 19+ restriction made it clear this would be different than the secreted-away ragers of my teen years). 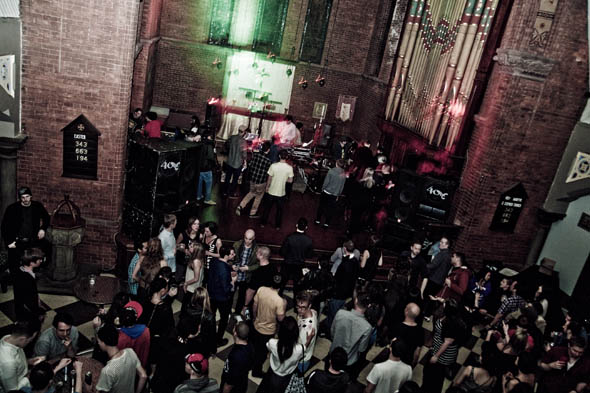 After checking my jacket in the bare front space, the first thing I noticed upon entering the main room of the church was flashing, coloured lights illuminating a huge, ornate, hanging cross - I mean, huge. Below, at the DJ booth between two arrays of massive speakers, Toronto's Vlsonn was blasting shrill tones over house beats, while pin pricks of light coloured the rising fog around the stage and danced on arched ceilings. A fog machine in a church is a beautiful thing. 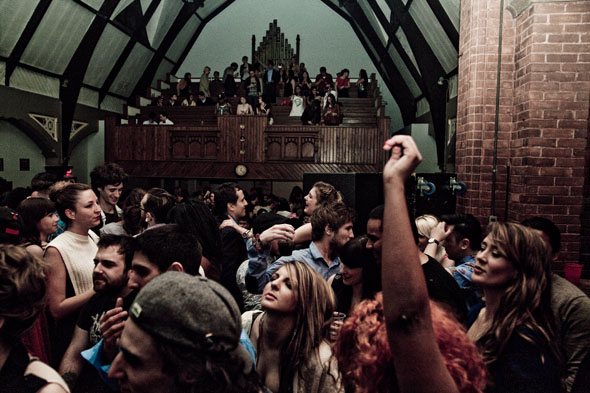 As someone who doesn't end up in churches very often, I realized St Stephen's would be a trip on its own. My photographer and I wandered on the floor for a few minutes, winding our way between early dancers and admiring gigantic organ pipes, hanging lanterns, and stained glass windows, before we noticed groups of party goers above us on a balcony of pews over the make-shift bar. We gaped at each other in joy. 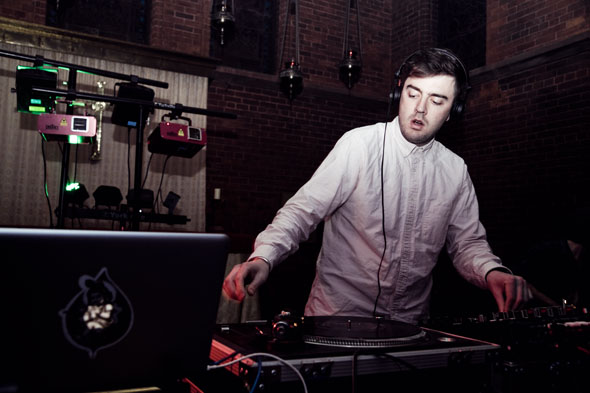 Wales' Doc Daneeka (named after the Catch 22 character) took over on stage just after midnight, priest-like before the congregation of dancers in a white shirt buttoned to the collar. As Doc, aka Mial Watkins (total cutie-pie, by the way), operated with surgical concentration over turntables and laptop, the growing crowd on the dancefloor was quick to push forward and get wild. Watkins filled the room with an infectious energy and brilliant rhythm and bass sometimes overpowered by droning choral chants: perfect for the space. 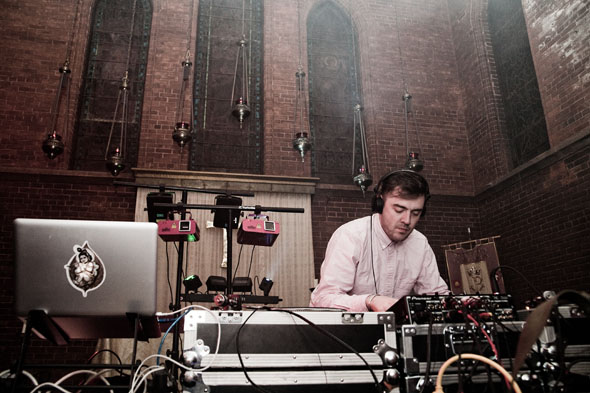 Though I had moments both while dancing and not when I had to pause in wonder at the music emanating from below the giant cross, St Stephens really stole the show. Comments ranged from "surreal" to "blasphemy" to "I'm drunk in a church!" On the balcony, which served as a party zone above the dance floor with its cozy descending pews and ideal vantage point, one chilled out attendee announced we were all sinners on our way to hell, while some girls rocked the pews, drinks in hand. Not to say the vibe was evil; the beats may have lurked in dark territory, but revelry and awe permeated from the pews down to the floor. 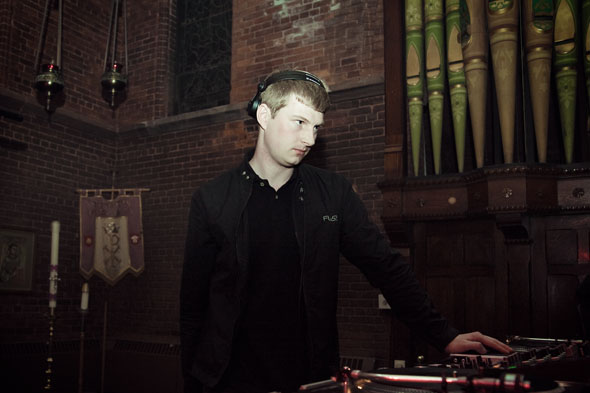 The space was also physically over powering: inside and out, narrow and unexpected stairs tripped heeled and sneakered party-goers alike, and after taking the stairs to the balcony in heels a couple of times myself, and dancing more than I'd planned, I was wiped out. I stayed to hear Addison Groove begin his set with ominous spoken samples vibrating over beats that slid like ooze across the dance floor, then reluctantly made my way outside before the set was complete. I know I missed a sensational finish — feel free to fill in the blanks for me, though it's going to hurt like hell.

The night's location may have been born of necessity, but I think most attendees would agree it was what made the party so memorable. I don't know what possessed St. Stephen's to agree to host Addison & Doc, but here's at least one grateful heathen who'd like to send infinite kudos their way.