Brooklyn noisemakers Japanther stopped by the Garrison Friday night to headline a benefit concert for Whippersnapper Gallery. Specifically, proceeds from the show are being directed towards the funding of the New Traditions festival, a day of arts and music programming taking place on Toronto Island on Saturday, June 30. The day will be the culmination of a month-long Artists in Residence series, during which four selected Canadian artists will be able to live on the island, actively engaging with their environment in site-specific research for presentation at the festival.

Having previously hosted notable shows around town for bands such as No Age and Matt & Kim, the folks at Whippersnapper are no strangers to the interaction between the spheres of art and music. They'll continue this tradition by presenting a live music component of twelve different bands throughout the day, including sets by Lemon Bucket Orkestra, the Wilderness of Manitoba, Lido Pimienta, and many more to be announced.

One of the emphases of the festival is the relationship between art and the world at large, especially when explored in a community setting. The sense of community was out in full force for the gallery's festival fundraiser, serving the dual purpose of showcasing bands with long ties to the Whippersnapper while raising money for the gallery's future endeavours. 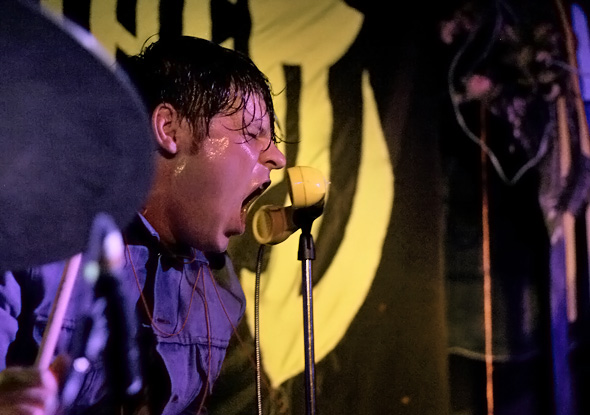 Appropriate, then, that a band that self-defines as an "art project" would headline the show. Japanther's set had more in common with the Ramones than your typical installation, though, as the duo took to the stage to quickly whip the crowd into a frenzy with their brief yet perpetually catchy songs. Bassist Matt Reilly handled most of the night's vocal duties, although powerhouse drummer Ian Vanek provided just as much presence with his incessant kit-pounding. The group displayed a penchant for showmanship and the staging aspects of their work with custom telephone receiver microphones and various voiceover samples breaking up the rapid-fire songs. 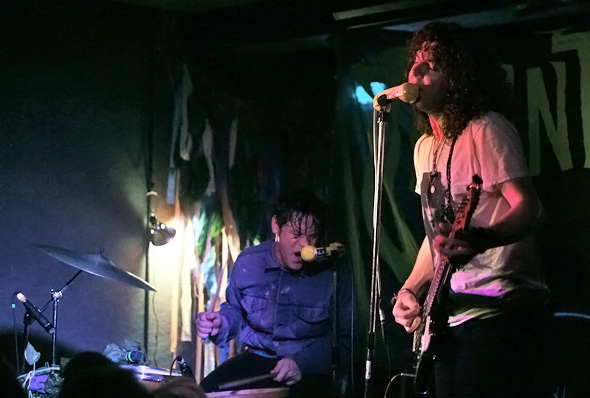 Highlights of the set were the Buzzcocks-meets-Beck skronk of "Radical Businessmen" and a series of tracks from career highlight Skuffed Up My Huffy, including "Challenge," "One Hundred Dollars," and "Fuk tha Prince a Pull Iz Dum." These moments exuded a sense of recklessness and abandon that were bolstered by a necessary amount of hooks and humour, creating a set that seemed to be just as fun for the band as for the many fans packing the Garrison. 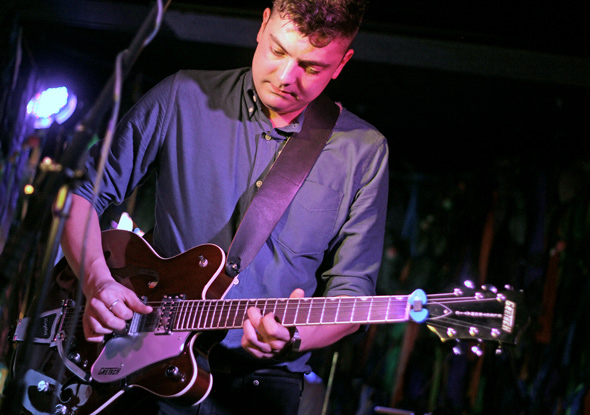 Prior to Japanther's raucous mayhem, the middle set of the night went to locals Boys Who Say No. The connection to the Whippersnapper was particularly pertinent here, as the band is the output for the songwriting of Luke Corriea Damude, one of the gallery's founders. Having honed their folk-pop sound on stages throughout the city over the last few years, the band is getting ready to take their live show on the road with Japanther through North America until the end of the month.

The jaunty call-and-response of "You Used to Get Along" was one of the set's most enjoyable moments, emphasizing their focus on the minute details of pop songcraft. While their sound is guitar-led and embellished with keys for extra texture, this approach was a better fit paired with the night's headliners than might be anticipated. Onstage, Damude came off like a more tempered Carey Mercer, flailing on his guitar while almost barking out lyrics. The set had somewhat of a lack of dynamics, but each song was memorable enough to look past this and towards the potential that the band undoubtedly possesses. 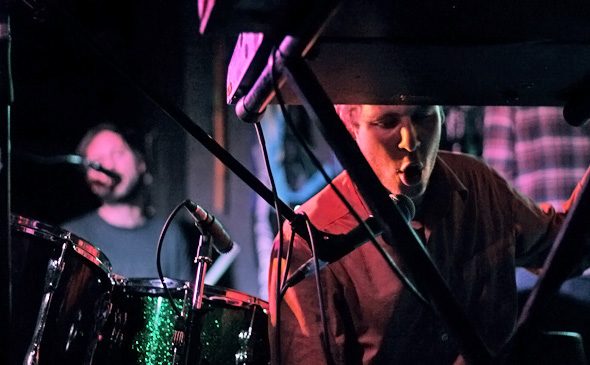 However, the award for best set of the night is, again, going to have to go to Absolutely Free. Having upstaged everyone else I saw on Saturday of Canadian Music Week last month at their late-night Comfort Zone set, the ex-dd/mm/yyyy noise-krauters have been attracting attention with the refinement of the spastic pop that their former band pushed to its limits. dd/mm/yyyy, having never been a band that compromised its complex, synth-driven sound, live on in the musical schizophrenia of Absolutely Free, who at the same time incorporate greater focus on fleshing out individual sonic ideas.

The staggering musicianship of each of the band's four members was something to behold, particularly the dual drumming of Michael Rozenberg and Matt King, which was incendiary in its precision. While none of the band's recorded output is available commercially (or otherwise) yet, songs are on their way and Toronto's music scene will be all the better upon their arrival. For the time being, you can check out a few brief clips on their site, and see them at the Steelworker's Hall (25 Cecil Street) as part of Four Corners IV on May 25.

Ultimately, the night was a total blast with some great bands getting together for a great cause. Stay tuned to Whippersnapper for updates on New Traditions as well as various other programming in the gallery and around the city!