Sting busts out the bass at Massey Hall

Sting's Back-to-Bass tour touched down last night for the first of a two-night stint at Massey Hall.

After his recent reunion tour with The Police, followed by a tour with a full orchestra for his Symphonicity tour, Sting hit the road once again, but with a pared-down ensemble this time. The result is a somewhat self-indulgent set list, leaving out some of the more memorable tunes in favour of Sting's personal favourites, culled from 25 years of solo musical output.

Sting opened the evening with All This Time from 1991's The Soul Cages. His energy and enthusiasm bursting from his skin-tight t-shirt and slim jeans that showed off his yoga-toned muscular frame. He certainly didn't look like he just turned 60. 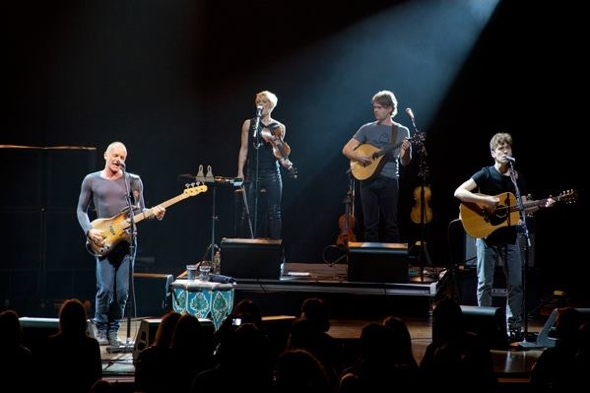 It was a typically appreciative-but-subdued Toronto audience. Aside from the final encore, the near-capacity crowd remained glued in their seats throughout the two-hour set, listening intently to some of Sting's best solo material alongside a handful of Police tunes that included Every Little Thing She Does Is Magic, Demolition Man, Driven To Tears and Every Breath You Take.

The understated lighting throughout the show (mostly white spotlights) allowed me to focus more on the music, which was well executed, with a little help from a formidable touring ensemble, which Sting introduced after just one song.

Sting spent some time between songs, describing life's triumphs and setbacks in missives about things like divorce (I'm So Happy) to buying a house — a castle, rather — in the country (Fields of Gold). He also spouted epithets by Shaw on fox hunting. Oh, Sting, now you're getting all cerebral on us! 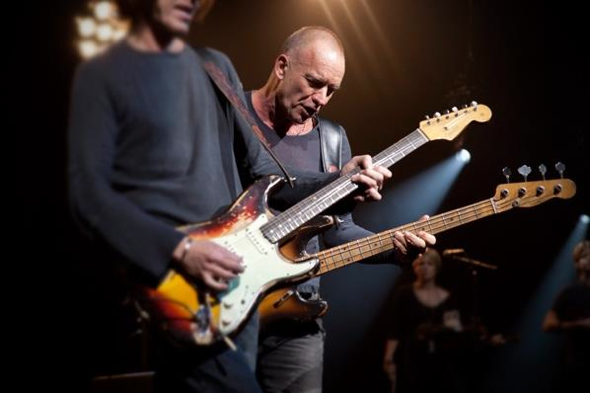 Nevertheless, the aging musician has maintained quite the charismatic frontman persona.

"One of the reasons I'm a musician is because of Toronto," he said, going on to tell a story about his Uncle John who moved to Toronto and bought him his first guitar. But then Toronto was cruel to The Police in '78 when only 5 people showed up for their Toronto debut at the Horseshoe Tavern.

Life can be fickle. As can his fans. I haven't felt compelled to buy a Sting solo album in years. But I've still got a soft spot for Dream of The Blue Turtles, the 1986 jazz-rock masterpiece that launched his solo career. When they played Fortress Around Your Heart, the gorgeous sax solo by Brantford Marsalis was supplanted with a fiddle, which robbed the song of its charm.

Some of Sting's more recent songs were unfamiliar to me. When he asked the audience, "What would you say if I said to you, 'Heavy Cloud?'" to which many shouted out "No rain!" I felt like a lapsed fan who skipped over an album and missed out on the party.

But I'd rather have spent a night with just Sting singing The Police's greatest hits. Judging from the reaction to his final encore, Message In a Bottle — performed solo with just a small, acoustic guitar — I think the audience would too. How about a Back To Basics tour next time, eh Sting?

Photos from a previous show on this tour.