On the front cover of Abigail Lapell's debut record Great Survivor is a diagram of a heart, a suitable image to represent the humble songwriter - the power of her songs and evocative lyrics, visceral and honest. Great Survivor is an emotional chamber, furnished with bare acoustics and anchors around Lapell's confident, smoky vocals. It's an impressionistic debut, one that feels like it comes from inside.

With the record soon-to-be released on April 14th, I took an opportunity to chat with Lapell.

I can't remember a time when I didn't sing and write songs - it's really all I ever wanted to do. As a kid I loved the Beatles, and Bob Dylan and Simon and Garfunkel. Whatever I could get my hands on in that vein, anything with a lot of harmonies. I was constantly listening to scratchy records my brother would pick up at garage sales.

I definitely fancied myself a bit of a flower child, and me and my sister thought we were wicked cool because we hated anything "popular" like N.K.O.T.B. So I sort of refused to listen to anything too new, though our older sister passed on a lot of the current 80s-era British pop cassettes. But I always felt alienated by anything too over-produced.

Then as an adolescent I fell madly in love with Sinead O'Connor. My singing style from that point was basically a Sinead impersonation. Eventually I discovered the Clash and the Pogues, and used to cover their songs on my little guitar - adorable! And Cat Power was a revelation to me. But mostly, I was influenced from a pretty young age by other songwriters I knew, and friends in bands, and anything my siblings left lying around.

You collaborated with a lot of talented musicians in your album. What was is like working with Heather Kirby (Ohbijou) on the recording process? When you started your music career, were you eager to meet a lot of musicians like the ones you recently worked with?

Working with Heather was great. She really helped guide the direction and sound of the album without ever being heavy-handed (as well as contributing her considerable talents on bass). All the collaborators on this recording were a really big source of support and inspiration, especially because I've been playing and writing primarily solo for the past little while.

I actually enjoy playing on my own too but it can be limiting, so there's a bit of tension for me between being a loner and wanting to reach out and challenge myself to work with other people musically. In the end I think we struck a really nice balance on this record between stripped-down, minimal arrangements and more built-up instrumentation.

A lot of the new songs on the record were written as part of an informal "song-of-the-week" exchange with my friend Jessica Moore (Charms), who's a great songwriter and poet and plays banjo and sings on the album. We would meet up each week with the goal of writing and playing one new song each. The title track "Great Survivor" was my first song-of-the-week. A few of the tracks are older tunes from the last seven or eight years that I'd never properly recorded and released before.

In general I tend to draw inspiration from the live music community around me, by my friends and their art. After moving back to Toronto a couple of years ago, I was really moved by all the music I was seeing in the city, and I started playing out and writing songs again for the first time in a while. There's really an amazing community of musicians here that I still feel like I'm just starting to discover after almost two years, in a good way.

Would you say that "visceral" is an accurate description of your music?

To me that would be a great compliment. I definitely want to write and sing from the gut. My music is very personal, despite not really being "confessional" lyrically, so the process of writing and performing always feels like I'm spilling my guts out everywhere. I also like the connotation of something that's a little bit messy or volatile, not too pretty or precious, maybe even "gutsy".

You play with different love conceits, and play the role of the suffering lover in "Yellow Rose". And in "Paper", you sing of longing and isolation, which seems willed at times. How do pain and pleasure work together in Great Survivor?

I like the idea of exploring different metaphors for love, albeit in a roundabout way - such a clichĂŠ theme, yet so potentially fertile. Most of my songs are basically sappy sad love songs, if only because I tend to write when I'm feeling heartbroken or desperately alone, or at least I'll draw on those kinds of feelings, whatever the explicit theme of the song.

And yet it's true that the flip side of that painful experience is a certain pleasure, the memory of or longing for pleasure, or at least catharsis in singing about it all and searching for comfort or meaning and even beauty in the ruins. Plus there's often a real indulgence in that lovesick pain or pathos, which I think can be very comfortable and even pleasurable, especially if you are a bit of a masochist and a closet romantic like me. 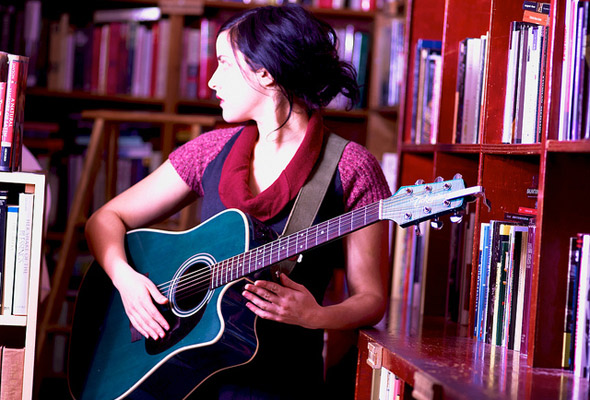 In "Yellow Rose" you sing one of my favourite lyrics in the album, "My tongue is a speeding train, around the world and back again, some depart, some remain." How do you fit writing songs and being a musician into your life without having to give up anything?

I would love to know how! Touring can be tough I think if that's what you mean, though I feel I haven't yet started my touring life in earnest. It scares me a little to think about, even though I like touring, because it precludes a lot of the down time and creature comforts that I crave.

Yet there's something lovely about meeting people on the road, striking up brief, intense friendships that can feel very real somehow, and sort of living in the moment, as it were.

At this point I feel like I might be doing this for a while, so I'm getting interested in how people manage to have things like a relationship and kids, or just a comfortable life, while maintaining a nomadic and not very lucrative artistic practice. I just mean different family models, like a couple I know who travel around in a converted school bus with their young son, and she works full-time as his manager. Or whatever, for some people it might be about getting a "straight job" and a mortgage and just being a weekend warrior.

Either way I can't really imagine not playing and writing songs, so I guess I'll figure it out one way or another. And I've known so many hard-working and uncomplaining musicians, and in the end that's one of the things I really most aspire to.

What changes or progressions do you notice in your approach to performing live after past tours? Where are some of your favourite places to play so far?

Well I have pretty terrible stage fright, so playing every night makes me feel a million times more confident as a performer. I actually think I sound almost nothing like when I first started playing out. At first I really swallowed my words and sang way too quietly. At some point I discovered I could belt it out super loud and basically never held anything back. Over time I think I've learned to modulate those dynamics a lot more, though it's always something I want to be better at. And sometimes my old recordings make me nostalgic for my brattier, more raw-sounding younger voice. I seem to be singing a lot "prettier" these days.

Anyway, in a sense I feel like touring is the only way I can improve as a performer, because no matter how much I practice it's not the same as a live setting. Touring has also taught me how to roll with the punches and deal with different scenarios, perform in different formats and for different crowds, handle the inevitable confrontations with jerks, whatever. I think that is what they call being a "professional."

So far I've mostly played around Ontario, and in Montreal and Eastern Canada, where I've had great experiences. Recently I got to do that singing on the train thing, from Montreal to Halifax, and it ruled! One of my all-time favourite venues is Casa Del Popolo in my former home of Montreal, where I am playing in a few weeks. I'm very excited to play in a bunch of new places this spring and find new favourites, too. 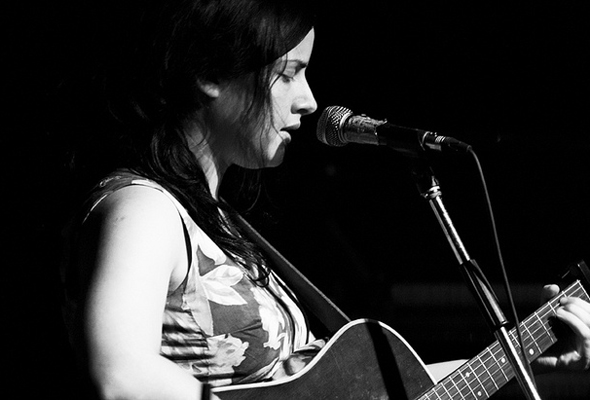 You end the album with the optimistic and open-ended "Twenty-Nine". I love the final strain in the lyric, "You'll be fine without me." How optimistic are you about the future and what does it hold for you?

That lyric is very bittersweet to me because it's such a tough love, cold comfort kind of sentiment. And a little ironic, how it's so sincere yet still maybe rings a bit hollow - "you'll be fine!" Sort of an empty platitude especially coming from the person who breaks your heart or the boss that fires your ass or whatever.

And from the other side, there's a certain false bravado to offering that reassurance when, in a way, what could be more devastating than a lover "moving on" and realizing they're better off without you?

That said, I agree that there is something (cautiously) optimistic there - you're not "fine" now, but you will be fine, and then you won't again, and it'll just keep on keeping on. To be honest, there have been a lot of major life changes for me in the last couple of years: my father died, I graduated from a protracted university career, I got and then left a secure day job, a long-term relationship ended. So the future feels pretty uncertain now, but then there is a kind of hopefulness that comes out of that anxiety. And I have a crazy amount of freedom.

I also think a little faith in the future can be self-fulfilling. I'd really like to take more leaps of faith than I currently do.

Mostly right now I feel really lucky to be doing what I'm doing and getting to travel around playing music, and I'm optimistic that I can keep doing it, maybe even on a bit larger scale now that I finally have an album to pass around. I would like to take more risks musically and maybe collaborate a bit more. And maybe in the future I will write a totally unironic, plainspoken love song, where I drop all conceit of being tough or hard (however transparent) and just ride off into the sunset like a soft-headed, open-hearted romantic.

You can pre-order and download a couple songs off Great Survivor here. Also, check out The Neighbourhood Mixtape: Quiet Hours to listen to her song "Paper".

Photos of Abigail Lapell by mikalmotasikal