I first listened to Heartbeat Hotel's full-length album Fetus Dreams and CoughDrops EP while waiting to depart from the Las Vegas airport, gazing out at the big windows at the desert landscape, past the mountains and the blinking lights.

Like Frank Yang (Chromewaves) theorized in his introduction to Heartbeat Hotel, I also thought the band's 2010 LP Fetus Dreams was the best free downloadable record to come out last year. Heartbeat Hotel mixes organic and electronic instrumentation along with shoegaze vocals, creating the kind of soundtrack you want to listen to when you are in a daydreaming mood.

I recently had a chance to chat with Heartbeat Hotel, and here's what they had to say about the album.

Fetus Dreams is composed of songs and instrumentals. What happens during these wordless track intervals? And what kind of images do you visualize when you play songs without words?

Andy: With "Guitars Kissing" for example, it's almost as if the listener is brought to sleep to go through a dream-world. When you reach "A Satellite's Still Just an Island" the listener wakes up.... But really, when these tracks were first recorded, there were no intentions of using them for the record. They just sort of happened as happy accidents. We thought they worked really well with the songs that ended up on Fetus Dreams and so we had fun including them. In the studio, there are always a few sessions that are all written and performed on the spot, just to see where we can take them - there were many other tracks made during the Fetus Dreams sessions that never made it onto the album.

In "The Hello Barrel," you sing the poetic lyric "Barrelling around the Universe is all we know" while "Windowsill #1" is filled with questions and hints of powerlessness, injustices - something tragic in our times. What themes can be found in Fetus Dreams?

Chris: Funny, that lyric is actually rather synonymous with where I was going with the "Windowsill #1" lyrics, meaning a general feeling of ambiguity towards the world. And the feeling of resenting that ambiguity.

There's something romantic in this album, and I'm not just talking about the idea of love and the image of a love-chase between people - but something deeper: being passionate about the world and not being left behind by it. How important is the idea of love in your music?

Matt: Love is always important. Any artist naturally draws inspiration from love or lack there of... our music is no different...

Chris: ...Back to the bit about being estranged with the expectations that are out there in the world though, you sort of look out your window today and you see all these things that are supposed to be great and supposed to have been great, and all these things that are supposed to be great, etc. And I think in a way this unarguable hope for things unknown is love in a general sense. So hating the idea of "being left behind by the world" is sort of about that - it's all about wanting to believe, it's about wanting to share your dreams, and really, you scarcely get the chance to.

Matt: ...all that being said, the "love-chase" mentality of longing for a specific someone was definitely a big force behind a lot of the songs on Fetus Dreams.

Some musicians - even groups that seem like a tight group of friends - complain about constraints and the difficulty of collaborating in the song-writing and recording process. How would you guys describe your friendship and your creative process?

Andy: I don't really see the point of complaining about it. It's obviously just tough sometimes to agree on very intimate ideas with someone else. We all feel very strongly towards the music we make, and because of that we disagree sometimes. Most of the time we don't though. 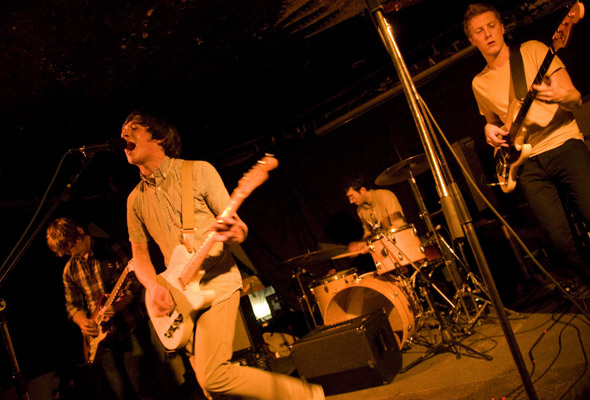 There's a lot of repetition in this album: the idea of circling and the echoing of words and questions. On track "Fins of a Shark", there's the "circling" imagery of the lines, "all the past stuck starin' right back at you" and "the fins of a shark make 'em swim in circles." There's comfort and happiness in doing the same things over and over again. What's the function of repetition in your song-writing and music-making?

Your last release was the CoughDrops EP. Are you guys working on something new?

Dave: Right now we're working with Royal Doulton on a new set of chinaware that should be available sometime this summer. The plan is to have a barcode printed on the bottom of each plate so that you can scan them with your phone and download our new recordings. Stay tuned at http://heartbeathotel.ca

Also, check out The Neighbourhood Mixtape: Against the Tide to listen to their single "Fins of a Shark" and download one of their tracks - "The Hello Barrel" - for free below, courtesy Chromewaves.