The sun shines bright outside, deceiving us by hiding the fierce wind chill in effect. I'm writing, wearing a thick cozy sweater while listening to Shawn Clarke's Like Birds, Too Tired to Fly - an album he released last year and which he sent to me a few weeks ago so that I could include one of his songs on The Neighbourhood Mixtape.

But like a bird who steals bread, I felt guilty for choosing to include one of his instrumentals instead of a track that showcases his vocals. In an e-mail I sent, I reassured Shawn that I would make it up to him because I feel Like Birds, Too Tired to Fly is too good to be adored alone.

2010 was a pretty good year for you. Your debut album is quietly getting good press. How do you feel about people talking about Like Birds, Too Tired to Fly alongside Polaris?

I'm honored that someone would think that. The Polaris lists usually represents some of my favorite Canadian artists.... Patrick Watson, Timber Timbre, Caribou, The Wooden Sky... it goes on and on. I don't think enough of the right people have heard the album for that to be possible, but it's a nice ego boost!

You mention Timber Timbre and there's a lot of collaboration in this album with bands you've worked with in the past - Olenka & the Autumn Lovers, The Wilderness of Manitoba. What are your feelings with how the album turned out? What would you have done differently looking back?

I was very happy with how it turned out. I went into it with very little direction, I had a handful of songs and a goal to have an album out by the time I was 30! Any project is only as good as the dumbest person connected to it, I felt like if that was always me, I'd be happy! So I just asked some of my friends to join me. Luckily they all said yes. I don't know if I'd change much at all given the chance... and if I did, it would be all on my end, stronger vocals maybe.

Canadian musicians often sing about Canada that is this vision of the countryside and the backwoods. It's like watching those Molson Canadian beer commercials where they show vast mountains and forests, people playing hockey on frozen lakes. Yet we live in the city, where you don't really see that imagery. Why do you feel Canadian musicians so often sing about one Canadian landscape and not the other?

I think it's because we have so much of it! I personally love cities, and like to write about cities. But when I toured with Olenka and the Autumn Lovers last fall, I got to see the East Coast for the first time, and the East in the fall can be breathtaking. It can be a great muse for art, but I personally just don't know how to write a song about the countryside without sounding like... The Tragically Hip or something.

It's really cool when musicians embrace and sing about the city. One of my favorite songs on the album is "To Think I Once Was Lost", which is a love song about Toronto - the sights of Bloor, city buildings and city lights, the sounds of Dundas Square. It's a pretty song. Who sings the lovely soft back-up vocals? And what do you find romantic about this city?

The singer on that is Rebecca Rowan from the band Kensington Prairie. She's one of my favorite singers in Ontario, such sweet vocals. She's just as lovely in person! What do I find romantic about Toronto? That's a good question. It's the places I think... Massey Hall, Green Room, Tranzac, NFB, Trash Palace, Press Club, The Local... I like that I can get what I want here. It's a bit of a clichĂŠ but I find the diversity wonderful. For an Orillia boy, Toronto was as big as it got.

Now, you sing about modern living like in "Sick Song", where you serenade the habits of watching television and checking e-mail or telephone calls about breakups in "Hurt Before". Why do you choose to sing about these topics?

It's not a really conscious decision. It usually starts very personal, and simple. For example, I was sick in bed when I wrote "Sick Song". I spent the day watching silent films and listening to music. From those jumping points I fill in the blanks. And where the story goes, usually has more to do with my rhyming scheme than it does with my situation! 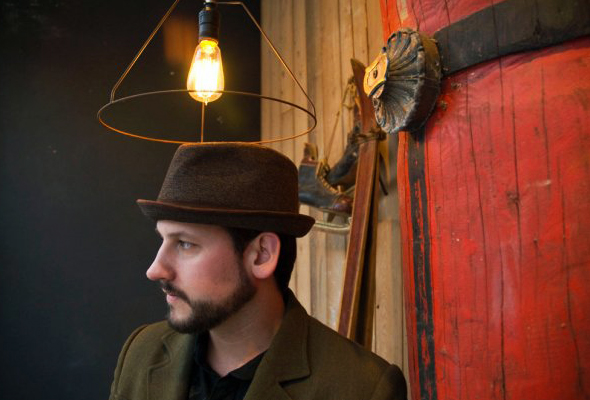 You mentioned projects earlier and I couldn't help but think about the title of your album - particularly the idea of flight. In our society where it's become harder and harder for people to do the things that make them happy, what's it like being able to finish this musical project and accomplish something doing the thing that makes you happy?

I can't tell you how important it was for me to finish this album. Around the time I started really thinking about putting this thing together I lost my job, and I had a relationship end. I was far too poor to pay anybody what they were worth (the musicians, and Marty my engineer/producer for example). But I felt like if I didn't get this thing done (my first ever full length album) by my birthday, I'd live to regret it. So, with a lot of perseverance, and understanding we got it finished. I wasn't expecting many people to hear it, so the great reviews I've been receiving has really been the icing on the cake. On a side note, the title "Like Birds, Too Tired to Fly" comes from a line out of Hunter S. Thompson's "The Rum Diary": "...and the sad notes floated out to the patio and hung in the trees like birds too tired to fly".

You begin the album with "Empty House" then end with "Untitled" and the repetition of the word "nothing". There's a real open-endedness there, which ties to your idea of filling in the blanks as you go along. Being a non-musician, it's hard for me to imagine how a musician goes about doing what they do. Do you know where you're going now as a musician? Do musicians ever know?

That's actually not something I had noticed. "Untitled" was me trying to be clever, as the song is about the difficulties of songwriting. But to answer your question, I have no idea where I'm going! I have a vague notion of where I'm going to go with the next album (and hopefully a 7" release or two), but things are constantly changing... for one, if I don't get a job soon, I might never get the chance to release an album again! I don't think anyone really knows, some are more focused than others... Olenka for example is one of the most focused people I've ever met, I'm constantly in awe at how much she can get done in a day!

Shawn Clarke will play at The Press Club on February 24th along with The Runaway Catholics. You can purchase Like Birds, Too Tired to Fly on his bandcamp page, as well as at Soundscapes and Sonic Boom. Also, check out The Neighbourhood Mixtape: Passing Through to listen to the instrumental "I Miss You When You're Gone" and download one of his tracks for free below, courtesy of Round Letters.