A critically acclaimed third LP released in North America and Europe, a trio of well-produced and well-received music videos, his second Polaris Prize nod in as many albums, the title of Canada's best rapper (as awarded by the National Post) plus opening slots on North American tours with K'naan and K-os are just a few of the highlights from the illustrious year that Shadrach Kabango has had in 2010.

Top that off with his first ever European gigs in December alongside renowned acts like Herbaliser, DJ Premier and Tony Touch, it becomes obvious that Shad has fulfilled his own TSOL prophecy and is well on his way to seeing "the world off of rapping these bars."

Having lived up to his own words in "We Are The Ones," Shad K and DJ T-Lo's first gigs outside of Canada and the US couldn't have come quickly enough. Leading up to their inaugural European trek, hip hop heads across the continent were awaiting the arrival of Shad's witty lyrics and carefully-controlled flow. Even local filmmakers in Cologne were hyping up Shad long before his arrival in Germany by soundtracking their Street Headis videos with Shad's 2010 summer anthem "Rose Garden."

Shad notes that the tour itself was "just a quick one - the UK for a week opening for Herbaliser, then Germany, then Paris and back to Germany. It's more tiring I find, touring somewhere like Europe, because it's just so disorienting. In Canada, everything is very familiar, and even in the States I have my bearings."

Kicking things off during a period in which the UK was hit with an arctic blizzard of snow, rain and ice certainly didn't make travelling around new territory a simple affair. "It was surprisingly cold - a bone piercing cold," notes Shad, "It's not even that it's that cold, it's just that where we stayed they just don't know anything about heating inside so you never got to get warm. It's just weird being cold for five days straight. I liked it after a while though."

With nine shows in eleven days, Shad didn't have much time to explore the cities as a tourist. "We had a day off in Berlin, so we got to see a bit there." That doesn't mean he isn't sneaking in a few hours of sightseeing here or there when time permits. "I woke up early today, went on the subway and hopped out and saw the Louvre."

His demeanour as we sit backstage at the Cabaret Sauvage in Paris is calm, cool and collected. Cerebral without coming across as condescending or egomaniacal, Shad K is his own breed of hip hop paradox. While others run their mouths and big themselves up behind the mic, Shad is mild-mannered and maintains an aura of controlled confidence while keeping both feet planted firmly on the ground. He's far from dark and twisted - he's the antithesis to Kanye's fantastical histrionic bullshit.

Tonight Shad is remarkably relaxed considering he's not only about to play his first ever show in France, but also because he is opening up for the legendary DJ Premier. Having seen Premier on the decks before, Shad is no stranger to epic Premo parties: "I've been to one DJ Premier party at Revival three years ago, and it was the best hip hop party I've ever been to." 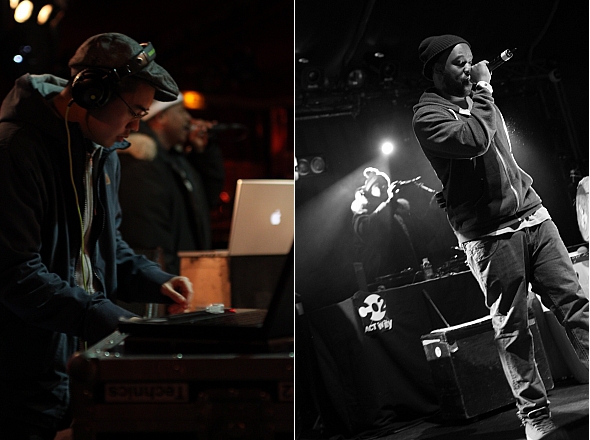 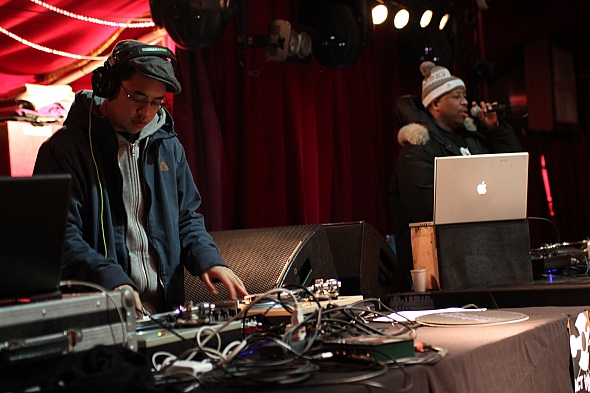 Cabaret Sauvage in Paris happens to be the perfect venue for a raging all-night hip hop party, or just a raging all-night party in general. Situated in an isolated area in the 19th arrondissement, the circular structure felt like it could double up as a circus ring on off-nights. On this particular night, however, the focus was pure hip hop and the Cabaret was soon filled with hundreds of eager hip hop heads ready for a night of debauchery and 90s throwback with Premo and Toca. 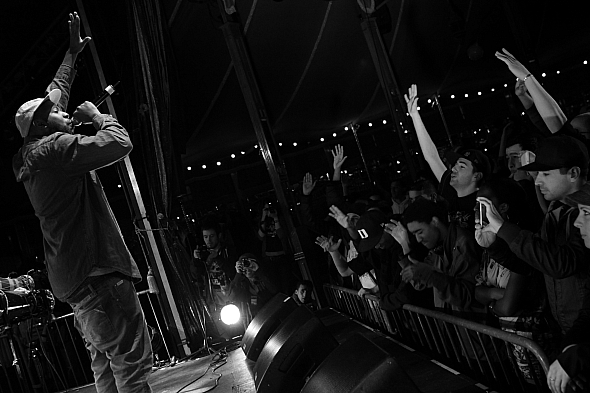 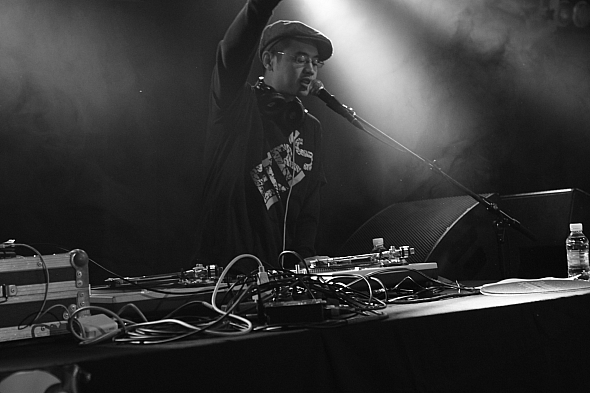 Doors opened at 11pm, with Shad hitting the stage around 12:30 in the morning. The crowd was diverse, and the people at the show were some of the friendliest that I met during my five days in Paris. Their reaction to Shad was unanimously positive, and though some of Shad's Ontario references may have gone over their heads, his pristine flow, playful rhymes and effervescent stage persona had them going wild from the moment he spit the first line of "Compromise."

After an eight-track rapid fire blitz of a set, Shad handed the mic over to Colombian hardcore rapper Rocca, whose latin-influenced rhythms and visceral, militant flow reminded me of a French-speaking Immortal Technique. 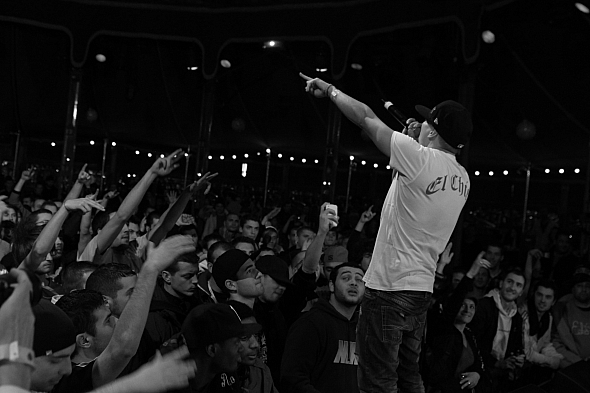 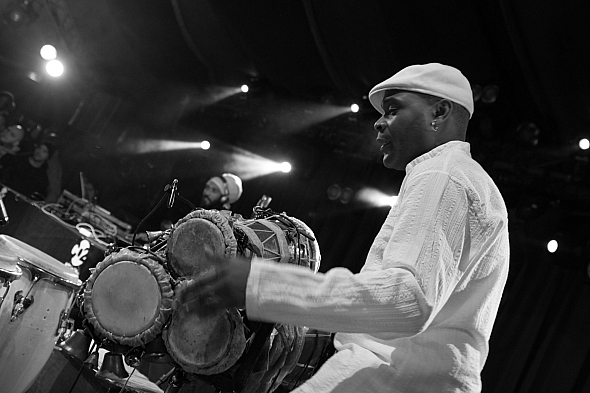 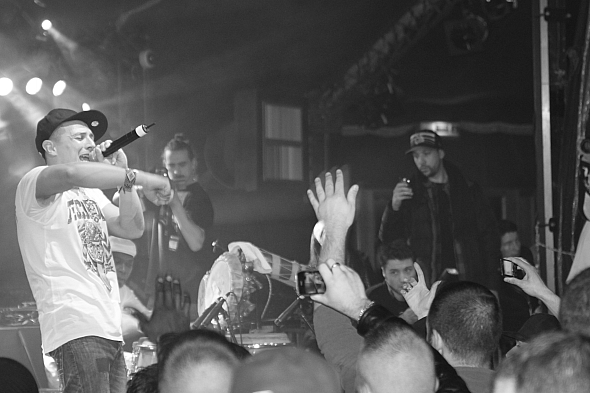 As Rocca's set winded down, Tony Touch hit the decks to deliver a masterfully mixed set of 90s east and west coast that kept the crowd going until the one and only DJ Premier took over around 4am. By this point, the air was so thick with the scent of freshly sparked Moroccan shit and smuggled Amsterdam beuh that you could barely see two feet in front of you. Numerous toasts to dearly departed hip hop greats (most notably Guru, RIP) had liquor flowing from the bar in volumes unparalleled by any gig I've even been to in Toronto. To put it mildly, a European hip hop party makes the booze and smoke controlled hip hop gigs in Toronto seem like child's play. 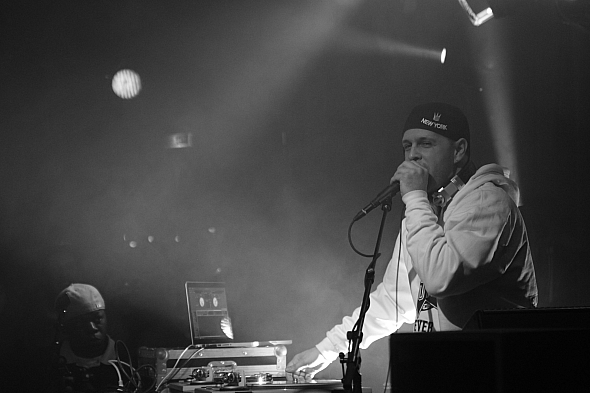 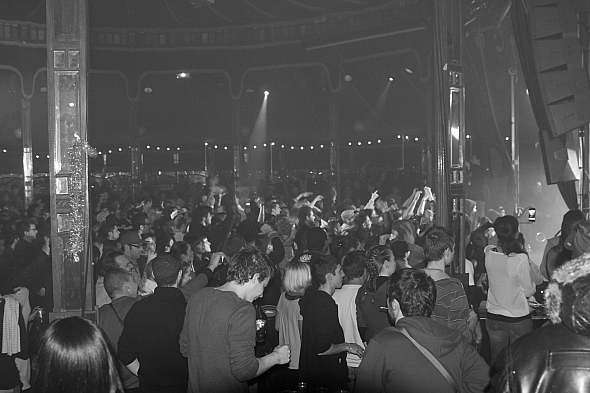 Shad and T-Lo have adapted well to playing in novel environments such as Cabaret Sauvage, despite performing with a stripped down touring line-up. "I've played some of the shows over here with a guitar and some without. I didn't bring one with me so I'll only play it if I can get my hands on one and if the venue calls for it. It's been a really cool throwback for us - old school DJ and emcee vibe." 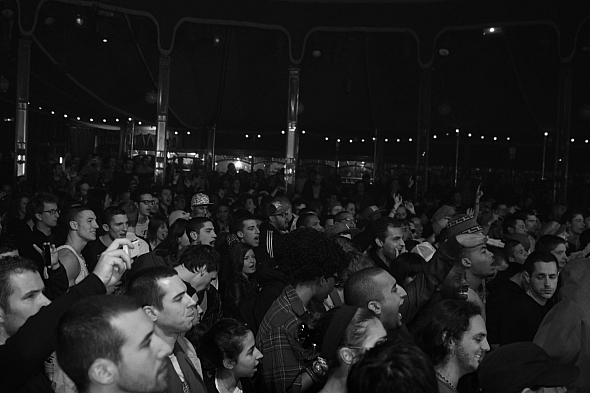 Following the closing date of his European tour in Cologne last week, Shad is headed to Africa for a "sort-of vacation. My parents and little brother live in Rwanda so I'm gonna visit them for Christmas then I'll be back in Canada for the new year."

As one would expect from an artist as prolific as Shad, the globetrotting rapper shows no signs of slowing things down in 2011, though his focus won't solely be on music. "I'm still trying to finish school. I'm at a graduate liberal studies program at SFU, and I take a term a year, so it's been slow. I've been at it three or four years now - so when music isn't too crazy and I have a three month window where stuff isn't too hectic, I can take a few classes."

"I'm going to headline a tour in April. I'll have a bigger band than I've ever played with just to switch it up a bit, cause we've been pretty stripped down for the last few tours - probably drums, bass, guitar, keys, maybe beat box and extra vocals too. Then after that I don't know, probably do some writing? It's all still kind of open ended - I never really plan that many months in advance."

So while a return to the studio for Shad may be a long ways away, his fan base can rest assured that there will be plenty of new verses for them to analyze in the coming year. A few months back, Shad headed into the studio with Alexisonfire / City & Colour's Dallas Green to work on a pair of tracks.

"We set aside a few days in the studio and came out with one new song and a remix. It will come out early in the new year I hope. It was fun - we toured together two summers ago. He's a dope dude - I've been a fan for a long time."

With an increasing following both in North America and abroad, Shad has asserted himself as a venerable force to be reckoned with on the international hip hop scene. Balancing music and school has proven to be effective for Shad so far, but he'd better hurry up with that degree from SFU. With his unique brand of hip hop spreading virally from continent to continent, it won't be long now before he's all out of downtime.