After the long weekend (at the Beach House) comes some Vampire Weekend. Clever, no?

Toronto tossed on its best plaid button-up, skinny jeans, and on this cool September night, the nicest of cardigans to take in some preppy indie rock at the Molson Amphitheatre. Vampire Weekend, no strangers to Toronto, were back in town kicking off the first leg of their North American tour last night. 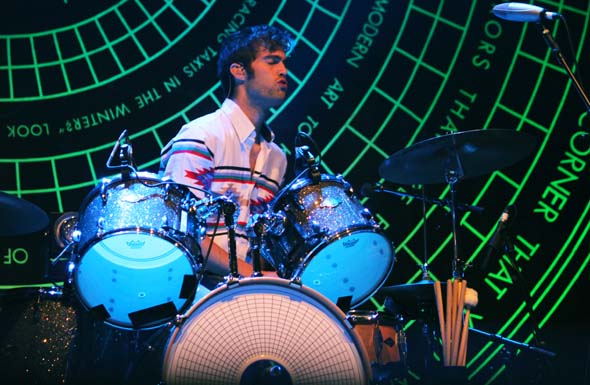 Having pumped out two hit albums -- 2008's eponymous Vampire Weekend and this year's Contra -- the Columbia University lads have honed their worldly-influenced pop formula. And it works on the big stage, even if they don't mix it up all that much. (This aside from hitting the stage in contrast to the hilariously juxtaposed DJ Khaled's "All I Do Is Win.") But they have grown more comfortable, poised on stage since the last time they were in town. Frontman Ezra Koenig was, to be sure, far more engaging the crowd, offering ongoing banter throughout the show. 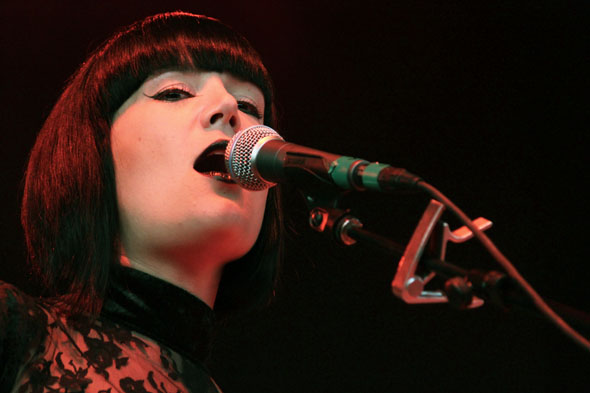 The night began on the early side with the four-piece, all-girl troupe, Dum Dum Girls. With their first full-length only coming out this March, Patti Smith-esque frontwoman Dee-Dee and her bandmates (who were all sporting black outfits) are likely to find more success in intimate venues for their Lo-Fi tunes -- at least for the time being. 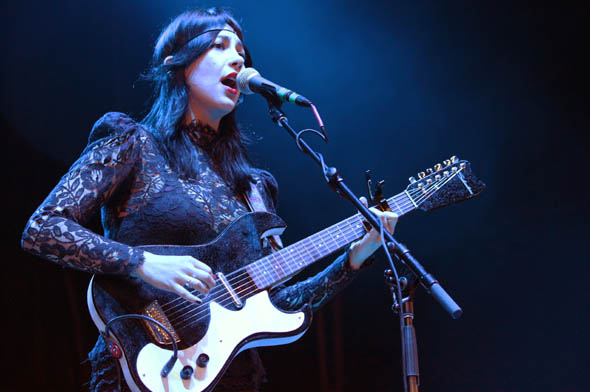 Although the show wasn't sold out -- the grass was closed and the seated area just before the grass was littered with vacant seats -- a good bulk of the crowd did show up for Beach House. 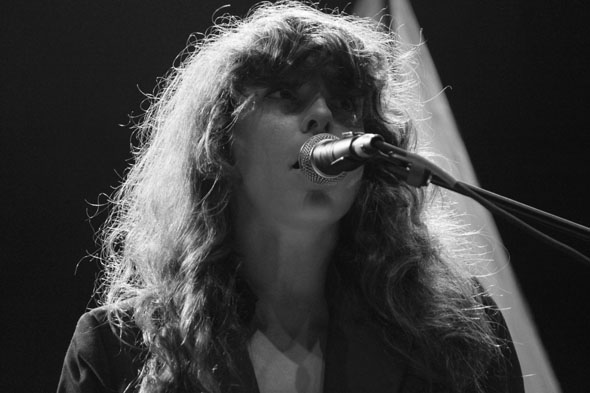 As I've described here before, Beach House are as tame and spacey as they come. Their laid back melodic pop is, nevertheless, refreshing. With soft greens, purples and blues falling on the quartet, the audience seemed to be as calm as they were. Some standouts were the building "Norway," the haunting "Zebra" and the closing, hyped-up version of "10 Mile Stereo." But there's no more to describing Beach House than to say that they're indie space pop. Ethereal pop even. They seem to really have that niche locked down. 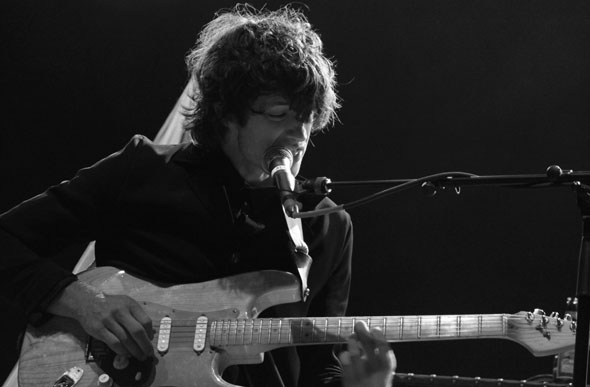 Enter Vampire Weekend. And a 90-minute, 21-song performance. Having only released two albums, the first just two years ago, Vampire Weekend plays a tight show. They sound good. Not brilliant, but good. Their stage presence has come a long way -- this is mainly in the form of audience interaction, or "community building" according to Koenig. You really forget the strong, feel-good sentiment of the prep rock outfit's songs until you hear the whole catalogue in succession. It's easy-going pop music with substance in both the lyric and instrumental departments. That's hard to do, but they manage it well fusing on-campus misadventure with Afro beats. There's also a lot of "ooh, oh ahs" that you forget about. But those "ooh, oh ahs" are damn fun to sing along to with thousands of others, all raising their beers. 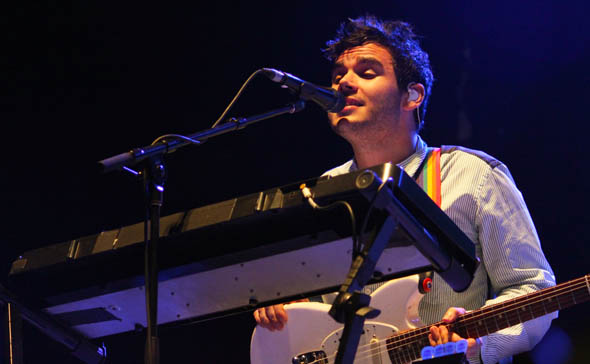 Playing almost their full catalogue of ditties, Vampire Weekend arranged their songs like a camel's back. Up and down with pace, sandwiching, for instance, the chilled-out, "I Think Ur A Contra" between the high-energy tunes of "Diplomat's Son" and a spot-on rendition of "Giving Up The Gun." They also slid in a smooth, tranquil cover of Bruce Springsteen's "I'm Goin' Down." 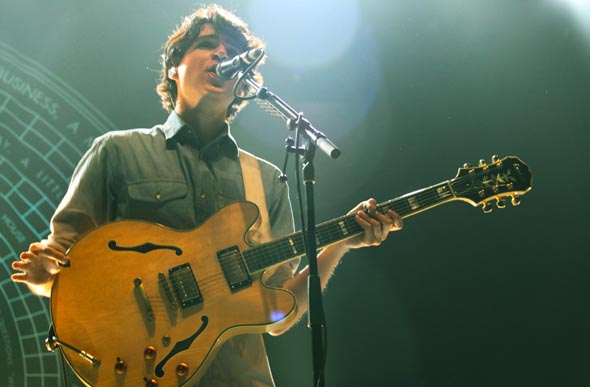 Koenig, who suffered inflamed vocal cords and had to cancel a Seattle gig last week, was thankfully in fine shape. Understanding the wide collection of "ooh, oh ahs" in his songs, he asked for a number of sing-a-longs and call and response moments with the audience. The crowd happily acquiesced. He also took quick breaks in between a couple songs to divulge a bit about the tour. He explained that the band's backdrop is typically a lot prettier because they tour with two massive chandeliers. Canadian customs, however, wouldn't let the chandeliers through apparently. 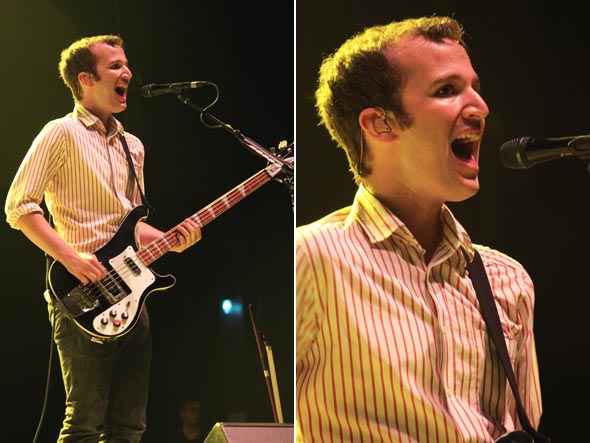 With a three-song, everyone-get-your-arms-in-the-air encore, Vampire Weekend put the finishing touches on a most pleasing Toronto stop last night. 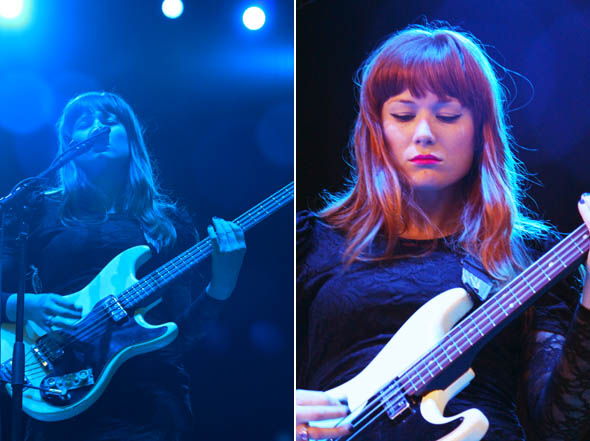 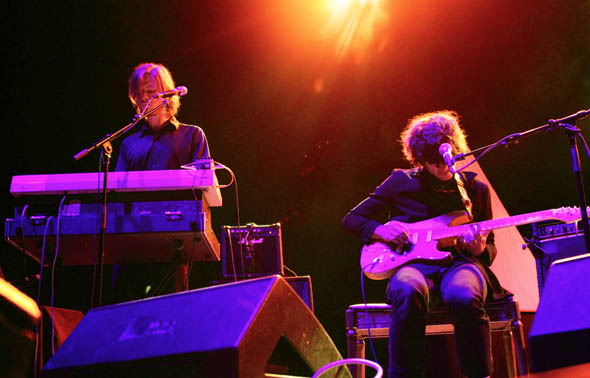 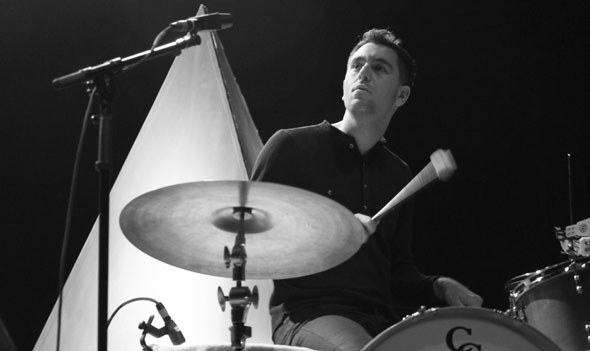