If you've been following this TTC busker profile series for a while, you might have noticed that Toronto's world of subway musicians is very interconnected. Sure enough, guitarist and singer-songwriter Kim Cole is a good friend of Sue Peters of Sue and Dwight.

Kim's bubbly disposition and instant likability are only matched by her beautiful voice, which filled the air and made heads turn at Runnymede station. I spent some time getting to know her and unearthed a personality as bright and welcoming as her smile.

Tell me a bit about yourself. Who is Kim Cole?

I'm a singer-songwriter. I kind of came at it by an indirect route. I was always interested in music and I always sang, but I actually went to college for music business management. And then I started songwriting because I realized I didn't really want to work in the industry, I just wanted to be a performer.

About 14 years ago. A friend of mine had a guitar she wasn't using and I'd always wanted to play, so I asked her if I could borrow it. I didn't want to invest in my own if I wasn't sure I was going to do it, because at the time I just wanted to sit in my apartment and play to myself. I started teaching myself how to play guitar and write songs.

How did get into TTC busking?

Well, that was my friend Sue Peters, whom you know. She said, "Why don't you try out for the TTC?" I hadn't really given it much thought up until then, but I'd been working full-time for a while and I was really missing music. I quit my job and said to myself, "This is it, I need to do music more full-time." I'm so glad Sue suggested it. I just love it. This is my first year; I just started last October. 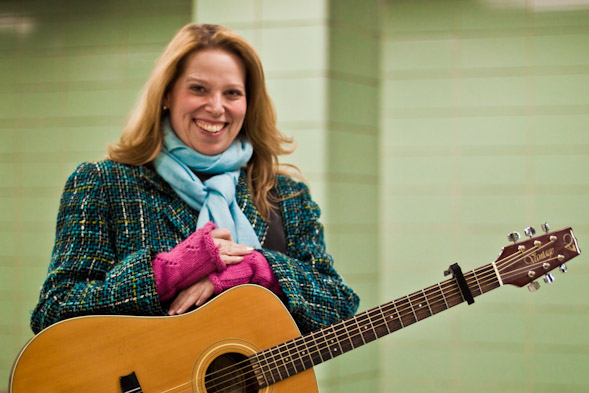 How do you know Sue?

We met through other musicians. We'd heard each other at open stages and little performances. It was right after I'd quit that job. We both played at a Christmas songwriter benefit show. We shared a table, and hit it off. We've been really good friends ever since.

Actually, occasionally we play as a duet in the subway, which is lots of fun. I play mandolin as well as guitar and I bring that out. I like to let her take the lead, sing her stuff, sing backup, stuff like that. It's also nice having someone else with you when you get the weird stuff happening in the TTC.

What's the most fulfilling thing about TTC busking?

It's really validating. You sacrifice a lot of things, like financial security. Creative people always have this struggle -- "Maybe I should be doing something more concrete." But every day, I'm reminded that music is something that really touches people. I always come home feeling encouraged and talented.

I call it roots. It's not really commercial country. It's sort of Canadian singer-songwriter roots. My friends call it "kooky Canadiana".

I write about people I know, but I take them to the next step and fictionalize them, make them a little more out there. I also write about myself and my own experiences. Usually it's about relationships. That's what most people write about, whether they're global or romantic.

Yep! My first CD is called "I'll Take the Cowboy." I'm working on my second CD now. The recording part's done, so it just needs to be mastered and put together. I'm hoping to get that out by the end of spring or early summer.

If people want a copy, they could get one from me while I'm busking. My first CD's also available on iTunes and CD Baby.

Who are your musical influences?

Now it's just all these fabulous female singer-songwriters like Patti Griffin and Lynn Miles. Lots of people say I sing like Joni Mitchell. 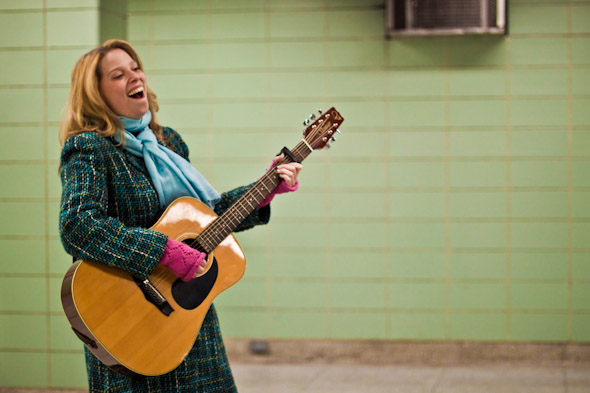 I have a part-time job with a journalist who's a very creative person, so even my non-music work tends to be in a creative arena. Mostly I sit around and try to write songs. I read a lot of books, too.

I have a week-long music gig coming up to raise awareness about bullying, called Blow the Whistle on Bullying. It will be at Centrepoint Mall and it's organized by the Brandon Street Community Development Foundation. I play in the opening ceremonies.

Can you tell me a bit about the song you played for me?

It's called Call Me Dorothy. It's going to be on the new CD. It's about starting a new relationship. I think that's probably one of the bravest things we do in our lives. There's always that big risk and you have to jump in and do it.

Oddly enough, it was inspired by a Halloween Dorothy costume I was sewing up for a friend's party. I just heard that hook going around in my head. It took me a couple months to sit down and write it. It's one of my favourites.

I actually get a lot of nice stories. I had one gal yesterday who said that she'd been having a really rough day. She said, "I imagine most people just walk on by and don't even really notice that you're there." I said, "You know what? You'll see that that's not true."

She stayed for a couple of songs. Sure enough, as I was singing, more and more people kept coming by, smiling and giving me the thumbs up. And she just walked away feeling so lifted.

I also love it when kids run up and start dancing to the music. They just respond so naturally. They really make their parents stop. Everyone's always rushing around to do chores and things, but the kids bring them into the present moment to hang out and have a smile.

I once had someone give me a homemade roast beef sandwich. A bag of corn nuts, too. And I got a New Testament a couple weeks ago.