Out in the west end at Royal York station, you'll often find TTC busker Yarko Antonevych calmly plucking away at a strange lute-like instrument. The scene is so charming and anachronistic that it's no wonder commuters are instantly drawn to him. "What is that you're playing?" they'll ask, and it has become such a common question that Yarko has the bandura's history hard-wired into his brain for anyone who cares to know.

Humble Yarko says he is but a bandurist and not a kobzar, or a traveling Ukrainian minstrel who would historically entertain and teach those around him. But if you ask me, with his natural storytelling capability and eagerness to share what he knows, there is no description that better fits him than that of a modern-day kobzar.

Tell me a bit about yourself. Who is Yarko Antonevych?

I'm 61 years old, born in Canada. My father came from Ukraine after the Second World War. My mom came from East Prussia. My native language is Ukrainian. I was brought up in Ukrainian immigrant community here in Toronto and in Oshawa, where I lived the first 20 years of my life. I studied music at Florida Atlantic University and Palm Beach Junior College.

It's heavily based on Ukrainian folk, but I play classical music, some rock ballads, and some jazz.

What is the instrument you play? How long have you been playing it?

This is called a bandura. The full name of the instrument is kobza-bandura, but now it's usually abbreviated. I started playing the bandura when I was almost 10 years old, in the very first bandura ensemble in Canada. The lady who ran it was named Walentina Rodak, and she was the person who basically introduced the bandura to Canada.

How did you start playing the bandura?

My father bought a Soviet-made instrument. There used to be these Soviet gift shops in Canada, and there were a couple of them here in Toronto. He just announced that I was going to go to camp to learn to play it. Back then, that's the way things were. Now kids have the choice to do whatever they want, but back then, parents told the kids.

I happened to have a knack for the bandura. I belonged to that ensemble for several years, and my love of other music -- especially rock and roll -- grew from there and got me to music school. At that point, no one was forcing me to play it, and I just did it because I liked it. Most of the friends I'd performed with in various orchestras, camps, and workshops had quit by that time. The pressure on them by their parents had been so strong that as soon as they were old enough, they wanted nothing to do with it anymore.

How often do people stop to ask you what your instrument is?

When I'm busking in the TTC, it's very rare that people don't. I would say at least a couple times an hour, if not more. Even people of Ukrainian ancestry will ask me what it is and be amazed that they didn't know about this part of their heritage. 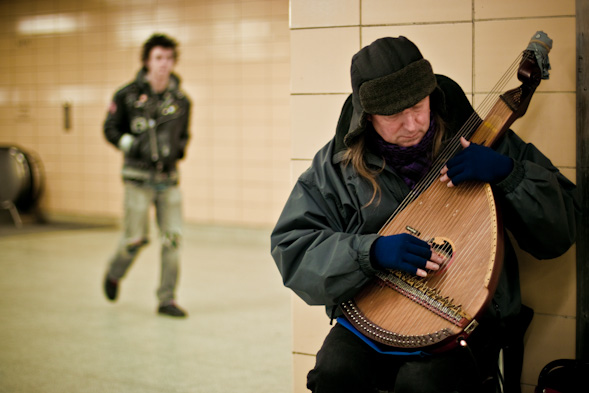 So, tell me a bit about the bandura's history.

It's part of a tradition that dates back to the 6th century. There was an Asiatic instrument called the kobuz, with five strings. It was introduced to Ukraine, and with a few changes, it became the kobza. Bards took on the instrument in their tradition. In the 13th or 14th century, various lute forms were introduced to Europe, and the instrument grew in size and acquired a few strings. That's when it became the kobza-bandura.

These bards or minstrels, known as kobzari, were mostly blind or crippled at the time that the area of Ukraine was feudal. The peasants were basically slaves, and anyone who was unfit to work in the fields played music instead. These handicapped musicians formed brotherhoods and traveled all across Ukraine, village marketplace to village marketplace, singing songs called dumy. They would entertain and teach peasants about their culture, history, and religion.

This tradition continued until the 1930s, when Joseph Stalin executed between 100 and 300 of these bards and destroyed their instruments.

Why did you become a TTC busker and how long have you been one?

For me, being a TTC bandurist is a way of continuing the tradition and legacy of these kobzari. They played in marketplaces; the TTC is my marketplace. I'm introducing the instrument to people who wouldn't normally hear about it. I've been a TTC busker on and off since 1987. It's a nice way to round out my income, too. When I'm not busking, I'm a school bus driver.

What's the difference between a kobzar and a bandurist?

A kobzar is more spiritual, more of a teacher to other people. A bandurist is someone who plays the bandura. Kobzar is a term that I wouldn't be able to use on myself. Someone else would have to call me that, and I have been called that by certain people. 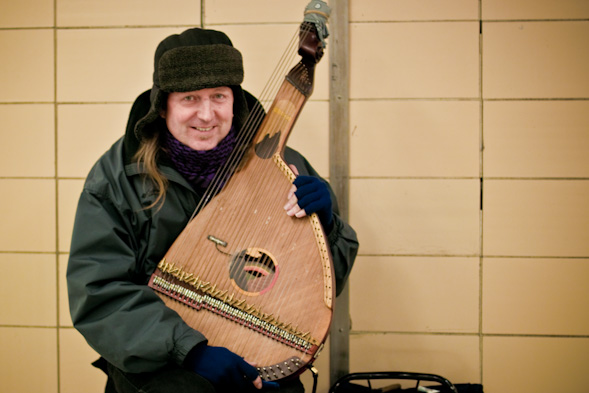 What about teaching people how to play? Do you give lessons?

I've taught quite a few over the years, in Canada and in Florida. I don't have any students right now.

At the semi-professional level -- unfortunately, it's not possible for a woman to join one of the two major bandura ensembles that exist in North America, because they are traditionally male-only organizations. A lot of Ukrainian women have a huge problem with that. The Ukrainian community can only support two bandura orchestras, and there have been some semi-professional ones with women in them, but they haven't lasted. I hope this changes.

Some friends of mine in New York City had a mixed ensemble called Homin Stepiv (Echoes of the Steppes Bandura Ensemble), and they were phenomenal. The record they put out is my absolute favourite bandura ensemble record. The mix of male and female voices is just so incredibly beautiful.

Do you have any records of your own out now?

I'm having a really tough time financially. A family member recently passed away and I'm doing what I can to hold on to the house. I'm hoping sometime soon to be able to put out a CD, but I don't have anything yet. If people wanted to hear my stuff, I'd suggest they write to me at yarkoantonevych@yahoo.ca and I could hook them up.

Way back in the 1980s, I remember a woman standing off to the side, listening to me play for the longest time. I saw her writing something down. She threw some money in my case with a note wrapped up with it, and as soon as she walked away I grabbed the note. It read, "I've been listening to your music, and if any music ever could, I think your music could bring about world peace." I still have it.

Grocery bags full of change, medallions from Ukraine, a lot of memorable things.

One young fella leaned over my case for a while, and I thought he was going to steal money from my case. But when he walked away, the case was filled with Canadian $20 bills. $165 in total. That was the hugest tip that I've ever gotten.