Wilco delighted the Toronto crowd for the second consecutive night on Thursday evening, offering fans an excellent overview of their back catalogue. Drawing from all seven studio albums, Wilco's two-hour set at Massey Hall could easily be mistaken for a greatest hits collection.

Australian multi-instrumentalist Liam Finn served as the evening's opening act, playing a short but sweet, high-energy set to get the crowd going. Liam is the son of renowned singer/songwriter Neil Finn, and occasionally joins his father onstage as part of the touring band for Crowded House. Solo, he was able to build songs with the help of a looping effects pedal, affording him the freedom to jump from guitar to drums as he pleased. Current Wilco drummer Glenn Kotche joined Finn for a pair of songs, a favour which was returned later in the evening.

Undeniably seminal, Wilco have evolved from a more progressive and experimental sound to a full embrace of countrified American alt-rock. Bassist John Stirratt and songwriter Jeff Tweedy are the sole remaining members from Wilco's original incarnation in 1994, shortly after the demise of their previous band, Uncle Tupelo. Their current line-up is arguably their most solid yet.

Due to Massey Hall's painful eleven o'clock curfew, Wilco rifled through the 24 songs in their two-hour set. The house lights faded at 9pm sharp, as Wilco took to the stage to the theme of The Price is Right. Without an introduction, the sixpiece launched into "Black Bull Nova," a piano-laden track laced with paranoid lyrics that build up to a cathartic and dissonant closing. 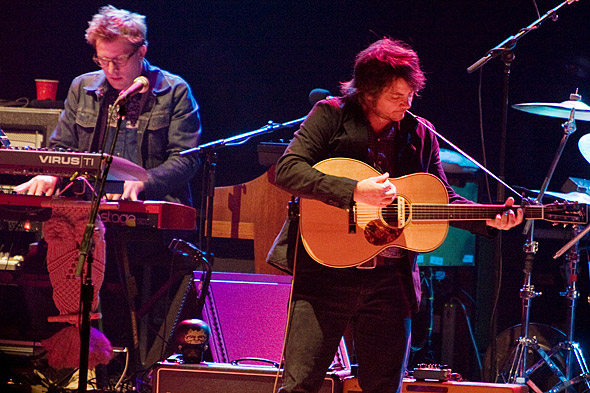 Crowd pleasers such as "Impossible Germany," "Walken, "Handshake Drugs," "Kamera" and "One Wing" had the diverse crowd stomping and clapping along, screaming with pleasure after each long-winded guitar solo from Nels Cline.

Born in 1956, Cline ranks as the eldest Wilco member and one of the more recent additions to the line-up. In my mind, witnessing his exuberant performance was enough to eradicate the purely aesthetic "dad-rock" label that Wilco have been plagued with since the release of 2007's "Sky Blue Sky." With an abundance of effects pedals and looping devices, Cline's notable jazz and blues influence meshed seamlessly with Tweedy's back-up strumming. There was an undeniable youthful charm in the air as Wilco showed absolutely no signs of slowing down.

Calling upon the audience for some assistance, Tweedy momentarily discarded his microphone for a moving rendition of "Jesus, Etc." He playfully joked with the front row, remarking that they tried the same sing-a-long the previous night with less than satisfactory results. From the upper gallery, the sound of hundreds of voices harmonizing was enough to turn my orbit around. Closing the set out with "Hummingbird," Wilco had the crowd up on their feet to stomp for more.

Returning to the stage for a seven song encore, Wilco were racing against the clock. Late 90's tracks like "Misunderstood," "Kingpin" and "Casino Queen" delighted fans of the older material while "Wilco (the Song)" and "I'm a Wheel" received a rapturous reception. Liam Finn joined the band for a performance of "California Stars," a yearning moment that was quickly overshadowed when surprise guest Leslie Feist joined Tweedy for a rare live rendition of their recently released duet, "You & I."

Climbing down the stairs as I made my exit from Massey Hall, I noticed a smile on almost everyone's face. Wilco brought much needed warmth to the Toronto crowd on an otherwise frigid night. Fans that missed out are in luck: the band will embark on a cross-Canada tour bringing them back to Ontario in late February.