The Virgin Music Festival 2009 edition kicked off yesterday at the Molson Amphitheatre. Although the major concern over this year's festival has been the move to the downtown Toronto venue, it actually worked out 'ok'. Strange sound mixing issues continued to plague the performers, and there was a definite absence of a 'festival' vibe this year... but low attendance has thus far made this one of the easiest and most accessible Vfests I've been to so far!

Whether that will remain true for today's show, offering a more stacked line up headlined by NIN's last Canadian performance, remains to be seen. 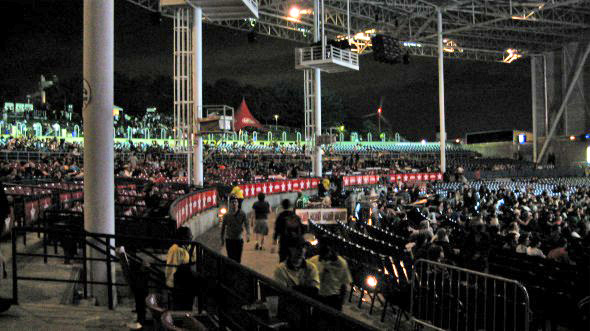 One way to handle the poor ticket sales to the planned Orillia venue was to move the entire Virgin Festival to the smaller and centralized Molson Amphitheater venue. This filled my head with visions of nightmare bottle necks and crowds blocking any hope of moving around between the three stages. However, the Festival seems to have avoided traffic flow problems by having dismal attendance. 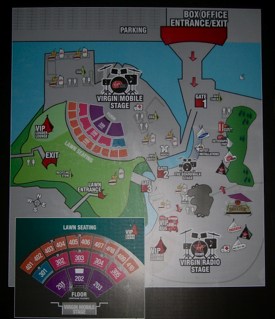 The venue must have been at MOST half full yesterday, with the biggest crowds packing in for The Pixies and leaving Ben Harper looking somewhat lonely in a theater full of empty seats and lawn gaps. The side stages were equally easy to get to, although I was seriously worried about the traffic flow when I first saw the park layout.

This quick shot of the map gives a rough idea of how the Amphitheater was laid out, followed by a shot of one of many potential bottlenecks strewn about the festival grounds. The second largest 'Virgin Radio' stage was placed near the Ontario Place kids water park (although sectioned off) and the third 'Boardwalk Stage' (aka Red Virgin Tent) is back behind the lawn area of the mainstage.

The boardwalk stage is actually really cool - all tucked in to a tiny pedestrian walkway, creating a club-like atmosphere that was really kind of unique to the Vfest offerings. I caught Iglu & Hartly - pop electro rapping beach rockers from LA, and the ever popular Rural Alberta Advantage both on this tiny stage. The crowds loved being up close, on the same level with the bands playing under a flimsy tent with no real stage to speak of. But this suited these artists perfectly, and in some ways this stage was more exciting that the other dominating festival acts. 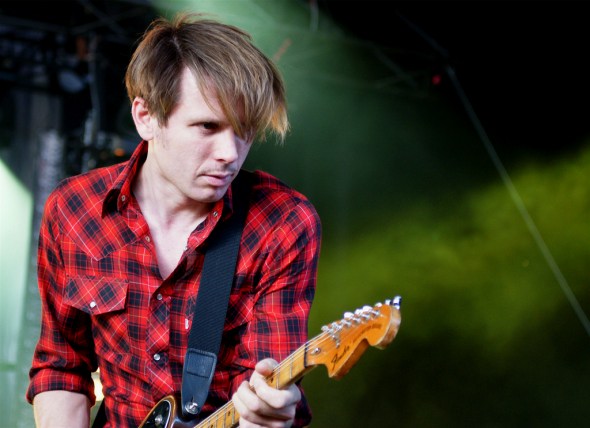 The only main stage bands worth mentioning for me were Franz Ferdinand, who put on a solid energetic performance, and The Pixies, who seemed to get better with each song of their long set. They of course obliged the crowd with favourites like Bone Machine, Here Comes Your Man, and Where is My Mind? - really a much better set than I was expecting from this seasoned rock reformation.

The Pixies - Here Comes Your Man - Toronto, Vfest 2009 from Corina Writer on Vimeo. 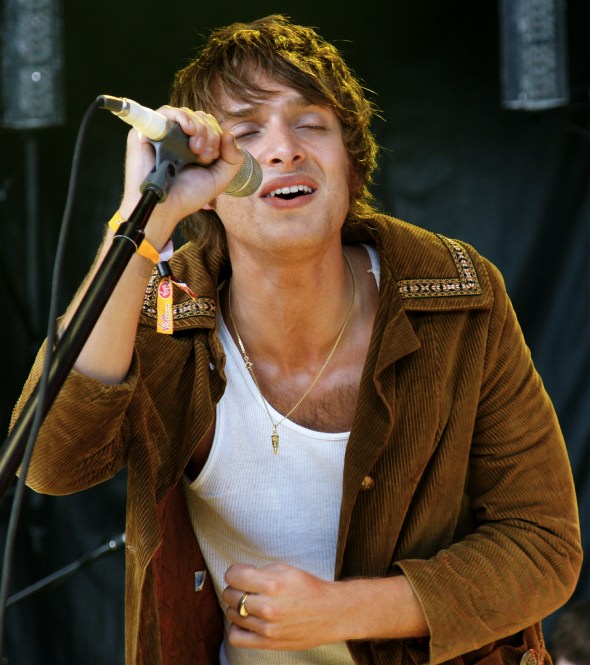 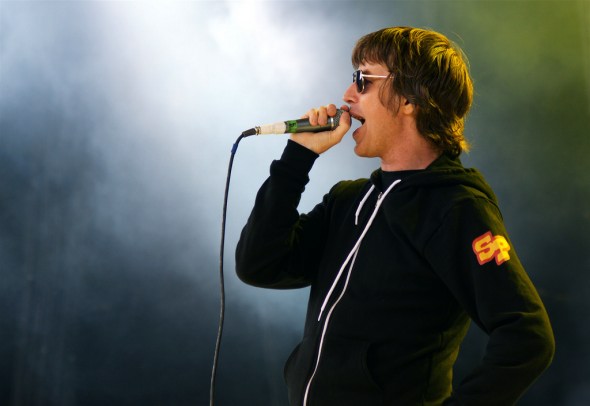 Speaking to some other festival goers, I'm told both Paolo Nutini and Sloan were good too, although questions about the sound levels plagued almost every review I got. There were a lot of questions about the quality of sound at the Amphitheater main stage after they announced the new venue, and I have mixed feelings. 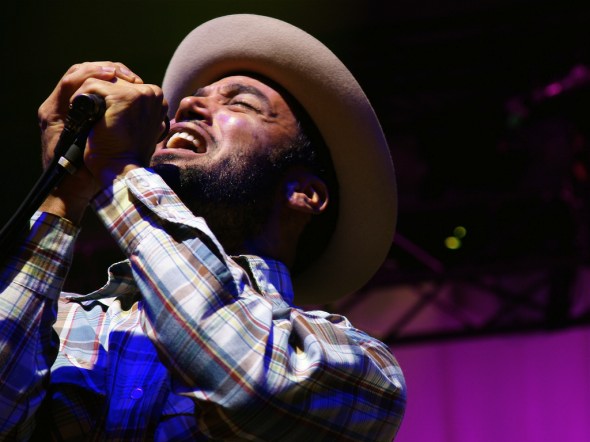 Ben Harper definitely did not sound 'right' and although the instrumentals were ok, the vocals seemed to have some sort of odd feedback. This may be a matter of where you're sitting as well, as I was off in the reserved media seats in section 301; however given that the entire theater is designed to provide quality sound, it's frustrating to have such inconsistent quality. I'm seriously hoping that Nine Inch Nails sounds better tonight than on their recent tour with Jane's Addiction at the same venue. 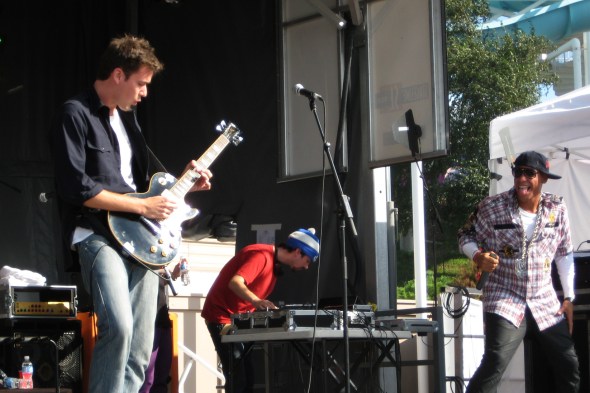 Finally, the hilight of the day for me was definitely hanging with the boys from Down with Webster. Not only did they inject the party at the Virgin Radio stage with some much needed energy, but they put on a fantastic set debuting some of the tunes like 'Back of My Hand' off their new album, due out October 6th. I had a chance to sit down with some of the band members to chat, and later caught up with them in the Bacardi Deck Lounge to talk about this year's Vfest:

So what has the band been up to, leading up to today's Vfest show?

Well some of us went to school for music and communications, and we've played hundreds and hundreds of shows... we haven't really taken a break!

You have a reputation for going non-stop... how long do you expect to keep it up for?

Haha, forever! We have played a lot, over a hundred shows this year all over North America. We joined Warped Tour, and have had a lot of help getting our name out there.

It's probably good to be playing back at home in Toronto, but Warped Tour vs. Vfest... any major differences?

The parking lots! Haha... Well on Warped Tour for the first two weeks, we didn't realize we had catering. So we were eating macaroni Michelinas... but here they have catering! I guess it was our first real tour so... but we just didn't know. The whole thing about Warped Tour is that even the big bands that are there, they get treated the same way as everyone else.

And Vfest then... what's it like to play here?

A lot of the bands at Vfest, it's a bit of a closer fit for us. Warped Tour was not bands we were really familiar with at all... if you look at Vfest, it's a lot of pop acts. Plus this is such a cool opportunity to play in front of hundreds of people who don't know who you are, just to see their reaction.

You're on today right before Pitbull and after Thunderheist... is this a fit for you guys?

We're so used to not having any fit, it's like nothing really fits with us so - whatever! It's good though... so far people have responded to it, from hip hop to rock to emo crowds... everyone seems to dig it. The stage here is kind of tucked away though... we'll have to leave breadcrumbs so people can find us.

That's the trick! Well at least you're not niching yourself too much.

It's kind of fun to be able to play for people where you're not sure what the reaction will be.

Anyone on the Festival bill you're looking forward to?

We're definitely staying for Ben Harper, and heard their bass player is really good. N.E.R.D., they're awesome... and love MuteMath, there's so much energy in that band, especially the drummer; it's great!

Down with Webster is getting ready to tour in support of their North American album release on October 6th. The new single, Back of My Hand, is on iTunes right now and totally rocked live! The guys will also be in town at The Phoenix on October 8th - worth checking out!

Overall, Virgin Music Festival '09 has been much calmer than I imagined, with few crowds to speak of but also a lack of excitement and energy. I'm expecting more fun, but more logistical frustration, from Day 2. Still, well worth it to see NIN headline!

For more photos, check out the embedded slideshow: