Merry Christmas! Last year I attended (and promoted) the first edition of Jason Collett's Basement Revue - a variety show-style residency at The Dakota Tavern hosted by roots rocker (and sometimes Broken Social Scenester) Jason Collett. It included an intense and creative political monologue by Andrew Whiteman (aka Apostle of Hustle) as well as a surprise solo performance by Hayden. It wasn't your average holiday concert and it left me hopeful that it would become an annual event. 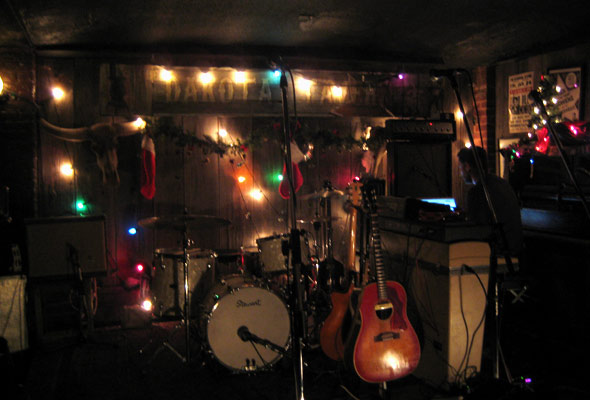 Luckily for us, Santa Collett (or Jason Claus?) decided to deliver another parcel of shows every Tuesday night in December at the Dakota. What a lovely room that is with Christmas decor up! I went to the December 23rd show and it instantly put me into the Holiday spirit. The fact that the Dakota has Mill Street Tankhouse Ale on tap didn't hurt either.

Every week Jason curates a different evening of surprises - both literary and musical - in a successful attempt to bring the people in his neighbourhood something different, something special. Our evening included a DJ set of rare music from the past century care of Buck 65 who, according to Jason Collett, has over 50,000 records in his collection. Buck 65 (aka Richard Terfry) also told us one of the funniest/scariest tour stories ever in between performances by The Golden Dogs (who previewed new material they're currently recording), local poet Kevin Connolly (who read both by himself and with a backing band) and a short Christmas-themed set by a band that called themselves Santa's Beard.

In addition to his full band performance, Jason started off the evening with a solo acoustic set that included two brand new songs. Watch out for "Lake Superior" on his next album - it's a good one.

When I left after 1am, Canada's sweetheart-in-the-making Serena Ryder had just performed a surprise a capella number and Collett backing band Zeus (who will hold down a Dakota residency in February) were ending the night off with a tight set of great Beatles-influenced rock.

Like last year, Jason Collett's Basement Revue sold out quickly. The final show is next Tuesday and I don't believe any tickets are available at the door. Other than letting you know how good the show was, the point of this post is to encourage you all to run out next year and get yourself a ticket to one of these nights.