It was an exciting day one at the 2008 Virgin Music Festival. Vfest brought a few surprises this year: a marching band, a big Jimmy Page tease, and an awful lot of hay! No surprise however, was the fantastic line up of bands and DJs.

Here are a few highlights from Vfest day one, including video of the Foos and a backstage chat with Canadian bands Flash Lightnin' and Wintersleep.

The day started off rather cloudy, but soon cleared up as throngs of fans made their way to the island. As proof of the ferry ride in being empty, please see my photo below; but as proof of Breanna's comments on the preview post, the beer lines and ferry home were not so nice. I almost forgot about this important ferry rule at Vfest: make sure you're at the front right of the stage at the end of the night. I made it back to mainland in about an hour.

However, they did a great job of moving people around for most of the day and lines only accumulated for beer and the ferry later on. I was very happy to see straw had been strewn over the wet grass and muddy areas - no 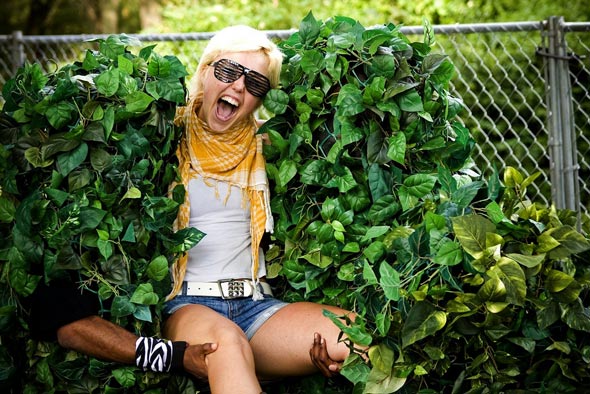 The big hype of the day was the Jimmy Page rumour. In London, the Foos managed to get Jimmy Page and John Paul Jones (Led Zeppelin) to play with them, and seeing as Page is in town for TIFF, everyone had high hopes... but no such luck. That didn't prevent the Foos from tearing up the stage with a bluesy guitar faceoff...

Richard Branson also made an appearance, all handshakes and smiles. You know, I have to vouch for this guy's charisma and he really seems genuinely interested in meeting people. Anyone who makes winning the Xprize a priority is cool by me!

One of the best parts of my day was getting to meet two very talented Candian bands, Flash Lightnin' and Wintersleep. Both were eager to talk about their music and the Vfest experience. 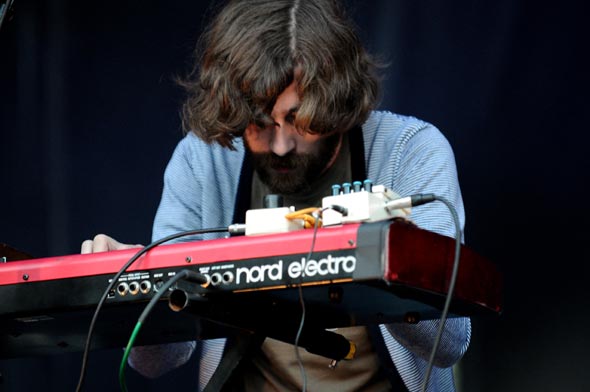 Wintersleep, a band out of Halifax, combines the talents of Paul, Mike and Tim to make rich, folky, sort of Eric's Trip-ish style music. As I told Mike and Paul, having recently heard their single Weighty Ghost featured in the film One Week (TIFF), they have solidified as an iconic Canadian band in my mind. With a solid response to the musical influence question (Sonic Youth), these guys are dedicated musicians.

They have recently relocated to Montreal, but are no strangers to Toronto. You may recognize bass guitarist Mike from Holy Fuck, who joined the band last year. Paul writes most of the music, plays lead guitar, and does the vocals, but the music generally comes about from long jam sessions with fellow band-mate Tim. These could be guys playing in their mom's basement from the way they seem to enjoy making music! Their performance speaks to their skill and fans were not disappointed when they hit the stage. This is Wintersleep's second Vfest, but the first with all three band members... both Mike and Paul had a great experience and are hoping to return next year with new music from the band. 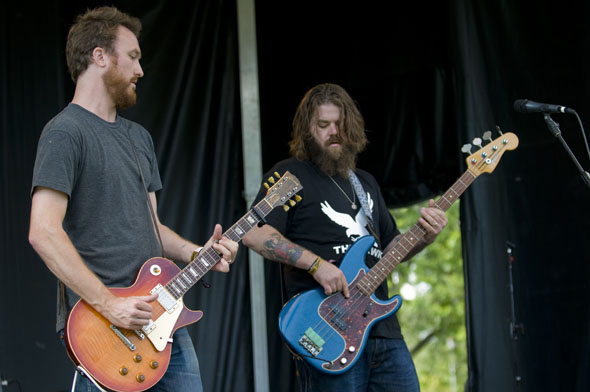 Flash Lightnin' played yesterday as well, rocking a crowd of eager fans at the O'Henry stage. These guys should be familiar to anyone who frequents the Dakota Tavern, as they played a weekly Wednesday night there for most of last year. They're also familiar to blogTO's Call and Response, but yesterday Darren filled me in on some of the new band developments. Playing Virgin Festival is one of the band's biggest accomplishments so far, and having toured with other Vfest veterans like Metric and Wintersleep, this was a great opportunity for the band. "Vfest is a good fit for us; we get to play for open minded people who love music."

Darren credits Flash Lightnin's success to the support of other artists, like members of Billy Talent and Broken Social Scene, and the incredible exposure gained through Myspace. Flash Lightnin' will also be throwing a big release party for their new album next Saturday at the Horseshoe Tavern, promising an awesome show alongside We Are the Take and Zeus. I'm sure we'll be hearing these guys again at a future Vfest too. 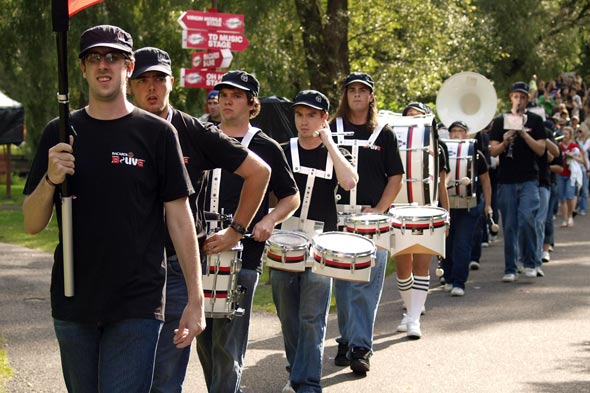 Finally, just to show the staging and performance set up, here's the Lets Go to War's dress rehearsal with the Mustangs Marching Band. This gives you an idea of the BLive stage some of the new acts being employed to keep the festival fresh. The band actually marched through the Vfest ground during the actual performance!

Looking forward to a smashing day two, including interviews with Arkells, Shad and The Pigeon Detectives, plus Deadmau5, Silversun Pickups and (of course) Oasis sets.