Electric Touch lit up the Molson Acoustic Stage this afternoon after tourmates The Fratellis had to cut their set short earlier on as they were drowned out by the sheer volume of locals The Constantines, who were tearing it up on the Virgin Mobile Stage, an earshot away.

Electric Touch's set wasn't acoustic at all. What do you expect with a name like that?

"This is a rock 'n roll festival," said Shane Lawlor, singer/guitarist of Electric Touch before their set. "We came here to rock." 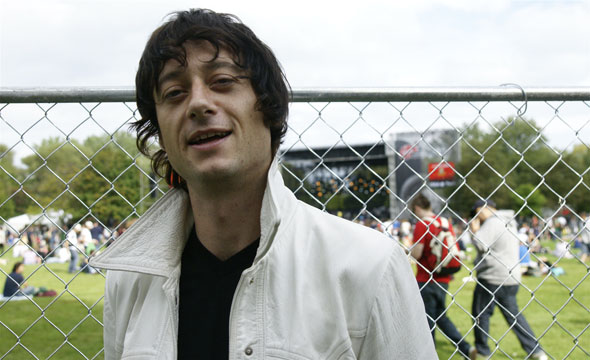 "The only thing acoustic in our band is the drums," said guitarist Christopher Leigh, whose twin brother plays drums. And even then, they're likely amplified for the set.

"Perhaps we should change our name to Acoustic Touch," Leigh joked.

The band just got signed to Justice Records, which is distributed by Universal. They're on a six week tour right now. But their only local stint is on the so-called acoustic stage.

"This is our first time in Toronto. We've played a bunch of festivals, including Coachella, Bonnaroo and Lollapalooza," said Lawlor. "We'll play for anyone, whether it's two or 20,000 people."

It's kind of unusual that Lawlor is from Nottingham, England but all his bandmates are from Austin, Texas. He wears cowboy boots like the other three, but he's got a different accent.

"We both dig the same music," said Leigh. "He just talks funny."

Lawlor admits that some of his favourite bands are from Canada. "I grew up listening to a lot of The Band, Joni Mitchell, Leonard Cohen and Neil Young. Now I like Metric and Arcade Fire too. You've got a lot of talent here.

"It's great to be in Canada. I feel more at home because the queen's on the quarter."