Last night I saw Irish shoegaze legends My Bloody Valentine play in Toronto - the only Canadian date on their North American reunion tour. One word can sum up my experience: Ahhhhhh!!!

After releasing two classic modern rock albums (1988's Isn't Anything and the 1991 masterpiece Loveless) and never finishing their third, My Bloody Valentine went into hibernation for over 15 years. About a year ago, the band's original line up (Shields on guitar and vocals, guitarist/vocalist Belinda Butcher, Debbie Googe on bass and Colm O'Ciosoig on drums) was offered a fortune to re-unite. After a handful of dates in the UK and the US, My Bloody Valentine brought their $400,000 worth of guitar amps and effects pedals to the Kool Haus.

The night started with two solid opening sets: instrumental band The Flowers of Hell (who were accompanied by Owen Pallett) and Irish singer/songwriter Gemma Hayes. The crowd was a mix of young and old MBV fans as well as loads of local indie musicians (members of Do Make Say Think, Broken Social Scene, Uncut, Vitaminsforyou, etc). It was really cool to see first hand how many great bands in our scene are fans of this influential band. 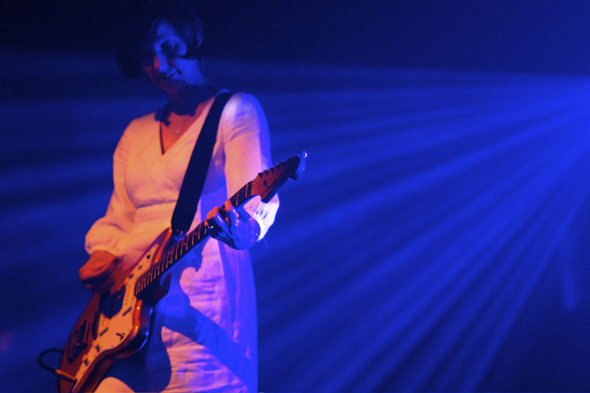 The wall of Marshall stacks made everyone excited and those babies did not disappoint. The wall of distortion was overwhelming from the second the band started playing. Unfortunately the loud guitars made Shields' and Butcher's vocals almost inaudible from anywhere in the room. That was a real shame because the most amazing thing about MBV's music is the fragile balance of beautiful melodies bubbling and lots of chaotic noise. Well, that balance was a bit too fragile (or broken) for most of the crowd's liking last night. I heard "turn up the vocals!" being yelled by several audience members between songs throughout their set.

Good thing it was some of the best noise I've ever heard. The guitars - although extremely loud - sounded AMAZING. Shields (along with Dinosaur Jr's J Mascis) wrote the book on using old Fender Jazzmasters and Jaguars with lots of guitar pedals. I loved "When You Sleep" and "Soon", which were maybe the show's best songs. I think every MBV fan in the room was thinking the same thing I was - "I can't believe I am finally seeing these songs performed live!"

Butcher and Shields assumed the trademark shoegaze guitar poses, which is to say that they hardly moved or showed any emotion. Googe and O'Ciosoig on the other hand are a very entertaining rhythm section to watch. They were seriously grooving up there. 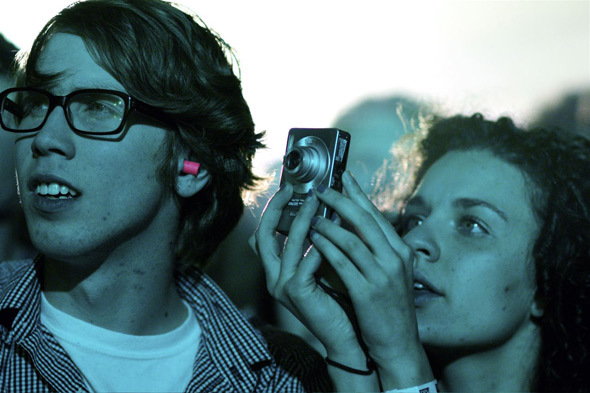 The experience was greatly intensified with psychedelic projections behind the band and a countless number of strobes that went off for some of the songs. I don't think everyone liked those, but I know that the free ear plugs given out at the door earned the security staff unanimous praise (an issue Roger covered during Vfest).

The show ended with 15 minutes or so of pure noise during the 1988 single "You Made Me Realise". It felt like you were standing right behind a jet taking off. I feel very badly for anyone in the room that didn't have earplugs on during that aural onslaught. From my survey of crowd reactions I would guess that 50% of the crowd loved it and 50% hated it and ran for the exits with their hands over their ears.

I have a feeling that was what MBV were going for though. I think they were simply trying to live up to their mythology as a band whose goal was to rebel against the "retro 80's" scene going on at the time they formed. They have great songs, they make a strong statement on stage, and even if you thought the guitars were too loud it was an experience you won't soon forget.