Hard Labour at the Guvernment

Although I have been into the local club/party scene for over ten years, I attended only my third mega party at the Guvernment when I went to their annual Labour of Love event Sunday night. What lured me to it this time? I had fun at Decadence back in March and was interested in catching MSTRKRFT again, in addition to a long list of impressive DJs in at least seven different rooms. And so the labour began.

My evening started with a chaotic wait in line that lasted over an hour. There were three horribly mis-managed lines set up so you had general admission people jumping awkwardly over the guestlist barriers and vice versa. Not a safe way to start off your night.

Once I was inside I slowly pushed my way through the very crowded Kool Haus (where annoying trance was blaring all night) toward the Guvernment side only to be told that the electro tent entrance was right where I first came in. By the time I finally reached the tent it had been an hour and a half since I first got in line and I had already missed impressive sets by local hero Nasty Nav and Australia's Vandalism. 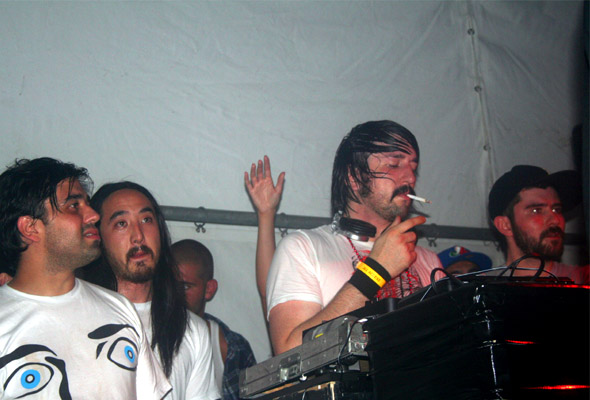 One thing the tent had going for it was the free popcorn, cotton candy and snow cones. I had three snow cones. They were great. You know who wasn't that great? MSTRKRFT. The crowd was going bananas but I thought their track selection wasn't as good this time around, and I recognized a bunch of tracks from their Decadence set. That was disappointing.

Celebrity DJ Steve Aoki is a real rockstar. He jumped up on the tables and head banged with the crowd for almost every other track, while an "assistant" jumped behind the decks to mix his next track for him. WTF? I wonder if he got half of Steve's payment. The stage diving looked really fun though, and it was cool hearing "Lithium" in all it's early 90's grunge glory. I didn't think dropping "Pretty Woman" near the end of his set was a smart move, and no else seemed to like it too much either. It killed the dancefloor, but there was always a sea of cell phone cams in Aoki's face which I think is the point of his sets anyways.

The main room was alright, but Mark Knight was on before I got there and I missed Benny Benassi because he was on at the same time as MSTRKRFT. I wasn't that into what Steve Agnello & Sebastian Ingrosso were spinning so I headed up to the Drink on the third floor. That was maybe the most consistent room of the night. The local Footwork crew really did a great job keeping that room packed all night with chunky house and techno. I watched Lee Osborne take over on the decks and stayed for most of his set. He absolutely killed it! His set reminded me of Mark Farina's amazing Fabric 40 mix CD - my favourite recorded mix of the year so far. Definitely check Lee out next time he spins at one of the Footwork parties.

The worst area of the night by far was SkyBar. I was really excited about hearing some solid music on a rooftop patio but the sound was awful. The speakers they had up there sounded like someone's home stereo at a Barbeque. It was also sketchy town - the place where everyone too wasted to dance went to stare at all the other wasted people. It was really scary.

From what I read on the Tribe message board, most people were as disappointed as I was with Labour of Love. Maybe I preferred Decadence because it was all indoors and the DJ's I wanted to see were in the main room. I think that's the only reason why I would bother attending another Guvernment party again.