Contributed by Robert Near.

The Guvernment hosted "Decadence" last night, March 20th, an after hours rave featuring the likes of Team Canada DJs, MSTRKFRT, DJ AM, and Infected Mushroom. The colossal venue is a nightclubbing stalwart, hosting a special guest almost every week. But tonight was of extra importance, for one reason: it was the first big rave after police raided another scene icon, Comfort Zone, on Sunday March 16th. What, would it mean for the party, if anything, and where would people go afterwards?

The effect on the party itself, seemed to be positive. The crowd was definitely up for it. Hoots, hollering, and smiling were the order of the day from the mixed bag of participants - hipsters, muscle Maries, hip hoppers, long time ravers, etc. Friends and random passers by, all commented that it was one of the best Toronto vibes they witnessed in awhile. 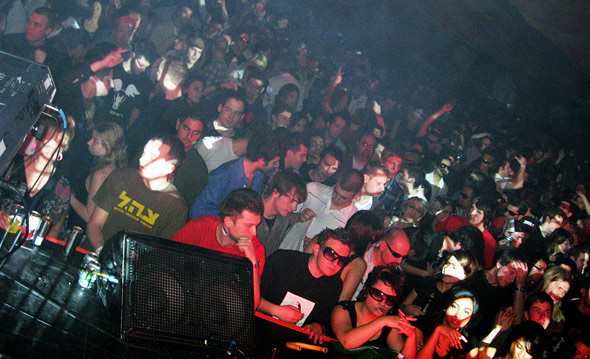 Israeli duo Infected Mushroom (aka. (I.Zen and Duvdev) even got some devil horns for their heavy metal sound. Simply a singer and guitarist, plus a boat load of electronics, IM put on a unique performance of hard, driving trance music, with many an improvised guitar solo. More than DJs on turntables, the crowd went bananas over the theatricality of it all,which the massive light rigs and bubble canopy perfectly enhanced. 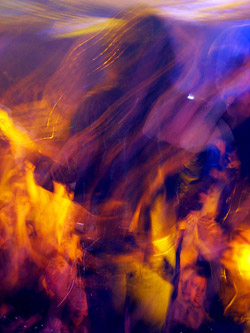 The others who had to rely simply on records did their best as well. blogTO favorite, Team Canada DJs, put on a solid performance. The guys, playing in the large main room, stuck to a big room electro sound for the most part, peppering their exclusive remixes in from time to time.

The trend continued with AM and, afterwards, MSTRKRFT. All of them played mostly hard, buzz sawing electro, plus a lot of Switch's spastic house anthems. Often too fast and devoid of melody, the main room was evidence that come 2008, new age electro has got to come up with some new sounds.

Thankfully, Baby Joel and Sydney Blu offered an alternative in the Orange Room. Joel played a quality set of straight up, chunky house and Blu continued in a similar vein, with more emphasis on techy, trippy sounds. Like techno with the tempo of house music. Not exactly revolutionary, but good, pure dance music that garnered a sizable crowd by night's end.

Ah, yes, it was 6am and it was clear that some people still had some dance left in their legs. According to their website, CZ was still open today, and as a result, people I spoke to were planning on going.

"Yeah, definitely," said Chris, a concierge and long time clubber.
"It's not the weekend without a bit of the Comfort Zone."

After ten plus years in the business, CZ has won a die hard following, a crowd that won't even be thrown off by a police raid. According to some reports, the place was heaving by mid morning and all is well at College and Spadina.