Shawn Fogel has a Good Day in the Desert

Listening to Shawn Fogel's new EP, One Day in the Desert, bounce back and forth between rootsy alt-country tunes and peppy power pop anthems, it's hard to believe that this NYC-based multi-instrumentalist was originally inspired to be a one-man-band by Stevie Wonder's Innervisions LP. As Shawn explains, "It blew my mind how one person could create such an amazingly skilled and tight sound all by himself."

So even though he's not the least bit funky (no offence, dude), Shawn has still managed to put together a fairly impressive body of work, thus far recording vocals, guitars, bass, drum kit, percussion, keyboards, clarinet, saxophone, recorder, banjo, drum machine, and harmonica (which he plays eerily like Neil Young). On this latest record, though, he's broken with tradition a bit by letting his recording engineer contribute bass and lap steel tracks as well.

"I recorded it with an old of mine - his name's Ryan [Ball] - and he actually plays bass in a band called The Machine, which is, here in the States, this big Pink Floyd tribute/cover band kind of thing, which is not really my thing, but he's a tremendous musician and he has a great home studio. It's something that we worked on for probably about six months, here and there. Even though I play a lot of instruments there are a couple of things that either I don't play or I just don't play nearly as well as he does. I figured it was a shame for him to be sitting there and not play a little bit on the record."

When it comes to songwriting, Shawn seems to be of two minds. One side deeply steeped in Americana turns out heart-wrenching tunes like "What's Mine is Mine" with its killer line "So I sit and I wait for time to fulfill me/While the way that I'm living will probably kill me." The other side writes straight up classic power pop Ă la Marshall Crenshaw as demonstrated on songs like "Leaves, Corners, Stones" which has one of the most skillfully executed time signature changes I've heard in a long time. He obviously missed that moment in Crossroads (1986, not 2002) where Ralph Macchio's teacher advised him that he couldn't follow two masters. In the end, it's likely for the best, because Shawn writes great material regardless of whichever muse he's chosen to follow at the moment, and that movie pretty much sucked anyway.

Shawn tells me he loves "all of the alt-country stuff, and I love power pop. I've always wanted to figure out a way to mix them both, but they don't really necessarily mix. Some songs just end up having a twangy kind of feel, and some songs end up going back to that Elvis Costello/Big Star throbbing, pulsing power pop."

From Studio to Stage to Sandwiches 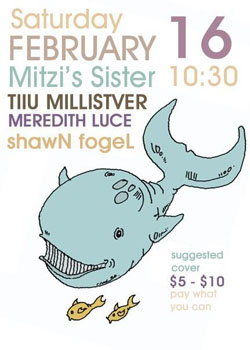 Since playing live is a totally different experience than hibernating in the studio, I ask Shawn how he's been dealing with that. "I'm doing mostly solo stuff," he confesses. "I have a band put together, but we're really only playing in New York City. They all play in different bands, and it's so hard to get everyone's schedules in line. All the travelling I'm doing, it's just going to be me and a guitar."

But the burning question remains - is this extremely affable songsmith some long lost cousin of Subway spokesperson Jared Fogel. "No relation," he insists. "I don't think I have quite the passion for sandwiches that he does. But there are worse possible connections to be made. At least my last name's not Stalin."

Shawn Fogel will play at Mitzi's Sister (1554 Queen Street West) this Saturday night. Cover is PWYC, and I highly recommend you check it out.