New York songstress Regina Spektor made her first all-ages appearance in Toronto last night at the Kool Haus to a sold-out crowd of mostly teenaged girls. Spektor's music has a pretty broad appeal, after all. No need to deny the 18-and-under fan base yet again.

Those of us of drinking age have to line up and risk losing half our arm hair when security staff sloppily apply fluorescent yellow wristbands on us so we can have a drink, once inside. Classy.

Jack Dishel, better known as Only Son, warms up the crowd with an engaging banter with his iPod, which doubles as his backing band once he starts singing and strumming his acoustic guitar.

More photos and stories of all-ages shenanigans after the jump....

There's a nervous excitement at the front of the stage, where I catch up with some of the most die-hard fans. Angela Horsfall, 15, says she loves Spektor's music because she writes songs about all kinds of things. "Even soup," she says. "And she's also not afraid to make wierd noises when she sings." Horsfall and her friend Sean Kua, 16, lined up since noon -- a full seven hours before door time -- to be the first to get in and claim a spot at the front for the general admission show.

Shortly after 9 pm the crowd cheers as Spektor takes the stage solo in a classy short-sleeved black dress with a floral pattern and seats herself at the grand piano. Second song in, Spektor launches into On the Radio from her Begin to Hope album, setting off many "I love you Regina" shout-outs, heard often throughout the night. 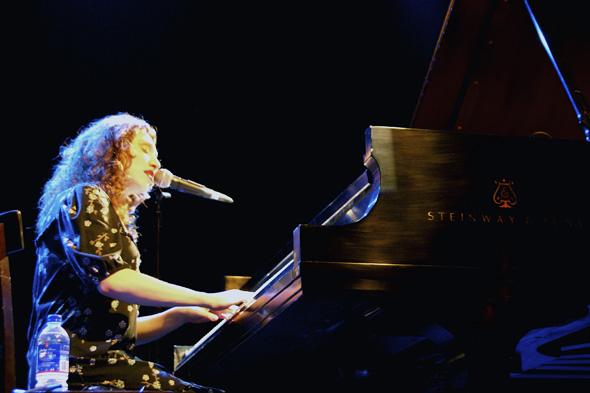 One of the loveliest treats comes from Spektor when she sings a beautiful rendition of John Lennon's Real Love, which she recorded on the Instant Karma: The Amnesty International Campaign to Save Darfur (The Complete Recordings), just released on the Canadian iTunes store on Tuesday and available now for download.

The stage setup is pretty sparse for such a large venue. Only a handful of oversized lightbulbs dangle from the ceiling among a single giant disco ball. The backdrop is all black, with a few giant disco balls of varying sizes scattered behind the piano on the starkly-lit stage.

I look around and see a lot of couples from 20- to 40-somethings. I see some mother-daughter concertgoers as well. But predominantly, the place is filled with teenaged hipsters. Many are scattered around the periphery of the venue, perhaps to be closer to the bars. 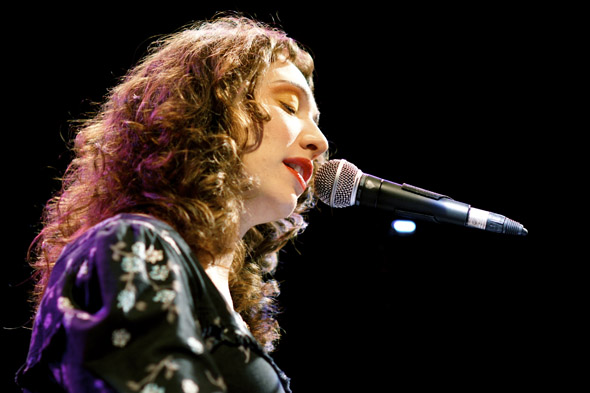 The sight lines at the Kool Haus are horrible for concerts. Unless you're near the front, you don't stand much of a chance of seeing the performers. Especially if they don't move around much on stage.

Someone's got the right idea. Towards the far side of the stage, a little further back, I spot a little girl with the best seat in the house: Perched atop her daddy's shoulders is an 8-year-old who is here with her 14-year-old sister, the biggest fan in the family, according their dad. This all-ages show is literally all ages!

When Spektor sings Bobbing For Apples, a song that goes "Someone next door's fucking to one of my songs," I see the dad reach above his head and cover the ears of his daughter, lest she picks up such depravity at such an impressionable age. A few songs later Spektor stares down at a young couple in the front row and says "You're so fucking cute!" in an honest, affectionate way. I bet daddy didn't see that one coming.

Spektor's songs are little slices of life, but they can be often raw and revealing. Would you want your 8-year-old listening to this? Then again, it's probably way past their bedtime by the show's encore.

Which brings me to the highlight of the night, when Only Son makes a surprise reappearance, joining Spektor on stage for one song. They do a duet to 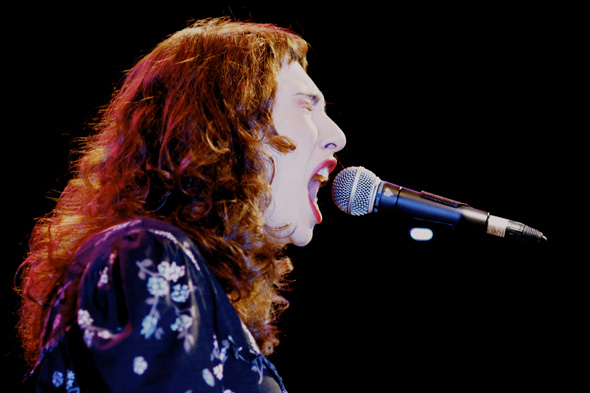 Hotel Song with Dishel providing a beatbox accompaniment, much to everyone's surprise and amusement. The concert wraps up at 10:30 with Samson, a touching ballad that leaves us with the sentiment "You are my sweetest downfall. I loved you first."

Perhaps next time Spektor comes to Toronto she can play a classier establishment better suited to her grand piano and intimate songs. Somewhere like Massey Hall. This way her biggest all-ages fans won't have to line up hours in advance for a good view of the stage. Begin to Hope.